The Bank of Israel have issued a new set of coins which continue the “Biblical Art” series first launched in 1995. This year’s set, the 18th in the on-going series, features the story of “David playing for King Saul”. The new coins carry the year “2013” and include two gold and two silver issues.

The story of David is remembered during the time of the Judges, the Philistines were a constant menace to the people of Israel and they asked the Prophet Samuel for a King. Saul, who was the son of Qish from the Tribe of Benjamin was chosen, and described as “a choice young man and handsome….taller than any of the people” (I Samuel 9:2). Saul’s kingship lasted for two years and during this time, Israel was torn by war against the Philistines. Further to this, he was commanded by God through Samuel to wage war against Amalek. Saul, however, instead of exerting his authority as king, listened to the people, who urged him to have mercy on Amalek. Thus began his downfall for not obeying the word of God and for not obeying, Samuel took the kingship away from him. 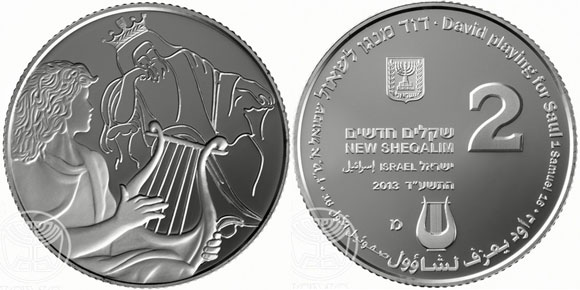 Samuel was then sent by God to choose a king from the sons of Jesse of Bethlehem.  Jesse brought his sons before Samuel but not one of them was deemed fit for the kingship by God. When he finally brought his youngest son, David the shepherd, described as “ruddy with fine eyes and good looking” (I Samuel 16:12), God commanded Samuel “Arise, anoint him, for this is he” (I Samuel 16:12). From this day, the spirit of God left Saul and passed to David and an evil spirit tormented Saul. To help him, Saul’s servants suggested that a man “who can play well” be brought to him. David the son of Jesse, whose anointment as king was as yet unknown, was chosen and brought before Saul. David played sweetly on his harp and relieved Saul of his depressive spirit. 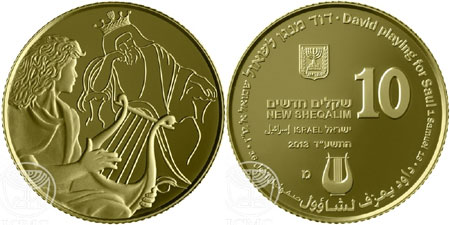 The image as seen on the obverse (common to all four coins) reflects the rise and fall of Saul as described in the Book of Samuel I. The design depicts Saul’s imminent disappearance as king is represented by an outlined background image of Saul seated on the throne, his crown detached from his head. In the foreground, David, the young shepherd, is depicted playing for Saul. The coin’s design is by artist Moshe Pereg.

The reverse, also common to all three denominations – includes the Face Value, (10, 2 or 1 new sheqel) and the Israeli State Emblem. “Israel” is seen in English, Hebrew and Arabic text, the mint Year and mint mark, which is a decoration symbolizing David’s harp is below the denomination.

Struck by the Mint of Norway on behalf of the Bank of Israel, the “2013” issue is important in the “Biblical Art” series as it is the first time that the 2 new Sheqel coin is struck in pure silver with a weight of one troy ounce as opposed to the previous .925 fineness. The 1 sheqel coin includes a Star of David to denote its proof-like quality. The 2 and 10 & 1 Sheqel gold coins carry the Hebrew letter “Mem” below the denominations indicating their proof strikes. The coins are available as a three coin set, (the gold 1 sheqel coin is not included in this set as an option) as a two coin silver set or individually. An early purchase price is currently being offered.

For more information on these and other coins offered by the Israel Coins and Medals Corp, please visit their website at: http://israelmint.com/david-playing-for-saul Information offered in Hebrew and English – international orders dispatched.