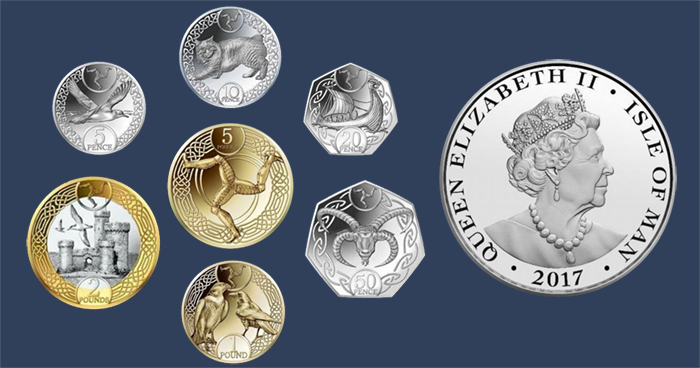 At left, all seven new circulating designs, including the new £5 coin in the center. At right, the common obverse design.

The treasury of the government of the Isle of Man have released images of proposed coins that are waiting for approval and authorisation for production. The new 2017-dated coinage includes substantial changes to both obverse and reverse sides of the island’s circulating coins. Included in the seven denominations to be approved are coins from the £5 to the 5-pence values—there are no designs submitted for the two smallest denominations, the 2-pence and 1-penny coins. The specifications of Manx coins, such as metal compositions, diameters, and weights, are not expected to change. The treasury also confirmed they will not introduce a new 12-sided £1 coin as the mainland will do from March of this year, stating that the counterfeiting rate for Manx coins is not considered a problem necessitating a changeover for this denomination. The Isle of Man’s parliament, the Tynwald, will be asked to approve the designs for production later this month. It is expected that the new coins, if approved, could be issued from April of this year. In 2016, the Treasury announced that they had cancelled an agreement between themselves and the Pobjoy Mint for the production of their collector and circulation coinage after a relationship of more than 40 years. The new official mint, the Tower Mint, with offices in London, will commence the island’s coin production from April 2017 for a stipulated period of 10 years.


Submitted for the approval of the Tynwald for the month of February are designs that include animal life found on the island—including the distinctive and tailless Manx cat, which is suggested to be included on the 10-pence coin. A traditional Viking longboat is suggested for the seven-sided 20-pence coin. The Refuge Castle ruins in Douglas are to be depicted on the new bi-metallic £2 coin. A new £5 coin, which the treasury will look to have circulating with up to 20,000 pieces, will be smaller than previous coins at 32 millimetres in diameter. Produced from an alloy of copper, nickel, and zinc, the £5 coin would depict the traditional three-legged “triskelion” on the reverse.

A new effigy of HM Queen Elizabeth II has also been submitted by the Tower Mint to the treasury, which will seek approval for this new design as well. Aside from the ordinary 50-pence circulation coin, the Tynwald will be asked to approve the minting of a commemorative coin marking the 150th anniversary of the House of Keys election act. It is expected that the Isle of Man postal service as well as marketing resources of the Tower Mint will be points of sale for the collector sets of the new coins.   ❑
Share: