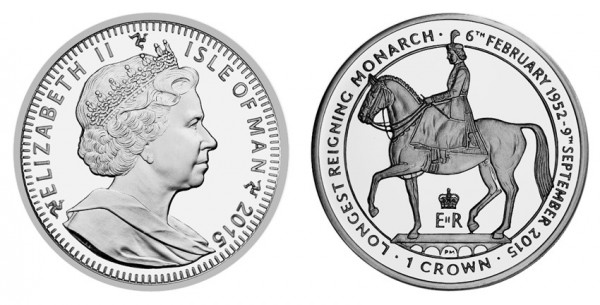 The Isle of Man Treasury has launched a new crown coin marking the occasion that Queen Elizabeth II, the Island’s “Lord,” achieves the longest reign in British and Man history.

Queen Victoria, great-great grandmother of Queen Elizabeth II, came to the throne in 1837 at 18 years of age and died in 1901, when she was 81. Buckingham Palace has calculated that she reigned for 23,226 days, 16 hours, and 23 minutes–or 63 years and 216 days. But as of today, September 9, Queen Elizabeth II has overtaken Queen Victoria’s record. Her Majesty became Queen at the age of 25 in 1952 and is already in the record books as the longest living British monarch, as well as the longest married. According to Guinness World Records, the Queen also holds the world record for the most currencies featuring the same individual.

In addition to her role as British sovereign, Queen Elizabeth II is the Head of State of the Isle of Man, officially known as the Lord of Mann. Since the reign of King George III, all heads of state and Lord Proprietors of the Isle of Man—with the exception of Queen Victoria—have been customarily referred to as “Lord,” regardless of gender.

Elizabeth II has been a frequent visitor to Douglas, the capital city of the Isle of Man, and in 2003 she presided over the outdoor Tynwald, or government ceremony. 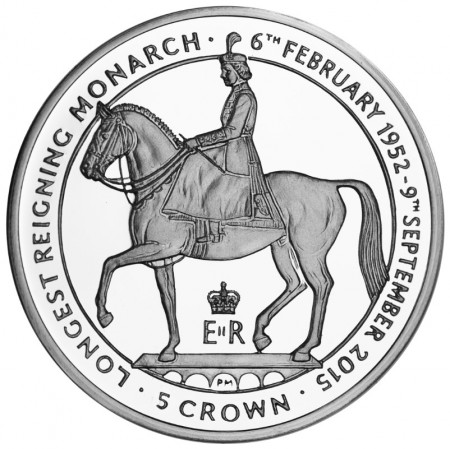 The new coin, produced by the Pobjoy Mint UK on behalf of the Isle of Man Treasury, features an image of the Queen on horseback taken from Her Majesty’s original Great Seal of the Realm. The Great Seal is an implement used to symbolize the sovereign’s approval of important state documents. Sealing wax is melted in a metal mold and impressed into a wax disc that is attached by cord or ribbon to documents that the monarch wishes to make official. Each time a new monarch accedes to the throne, a new Great Seal is produced and is only replaced for a particular monarch if the silver plate wears out.

The obverse of the coin features an effigy of Queen Elizabeth II, Lord of Mann, by Ian Rank-Broadley.

Each coin is struck to the highest quality with the precious metal versions being produced to Proof quality. The Proof design is in relief with a mirror-finish background.

For more information on these and other coins on offer by the Treasury of the Isle of Man Government, please visit the Web site of the Pobjoy Mint. Information is offered in English, with international orders dispatched where applicable.