The Treasury of the Isle of Man Government have launched two coins which mark the 75th Anniversary of the Battle of Britain, the name given to the Second World War air campaign instigated by the Luftwaffe against the United Kingdom during 1940. The Battle of Britain was the first major campaign to be fought entirely by air forces and was also the largest and most sustained aerial bombing campaign.  The Nazi’s objective was to gain air superiority over the Royal Air Force but their failure to achieve its objectives of destroying Britain’s air defenses, or forcing Britain to negotiate an armistice or even to surrender, is considered its first major defeat and was a crucial turning point in the Second World War.  The name Battle of Britain is unusual in itself as it gained its name prior to being fought. The name is derived from a famous speech by Winston Churchill more than three weeks prior to the start of the battle.

Commencing on the 11th July 1940 and lasting for more than three months, the unrelenting aerial attack on the civilians which was to be referred to as the Blitz, eventually ended on the 31st October when it became clear that the battle and aggression had an opposite effect on the British people, the RAF also proved more than capable of destroying fighter planes of the Luftwaffe with many more losses experienced than that of the RAF.

Another consequence during the battle, and for the rest of the war, was the importance in keeping public morale high and this was achieved by the continued presence in London of King George VI and his wife Queen Elizabeth. When war broke out in 1939, the King and Queen decided to stay in London and not flee to Canada, as had been suggested. George VI and Elizabeth officially stayed in Buckingham Palace throughout the war, spending weekends at Windsor Castle to visit their daughters, Princess Elizabeth, later Queen Elizabeth II and Princess Margaret. It is from these days that the comment attributed to Queen Elizabeth that “Now, I can look at the East end in the face” when Buckingham Palace was hit by the Luftwaffe during the worst of the bombings. Hitler later was heard to describe the Queen as “the most dangerous woman in Europe” due to her ability to lift British and commonwealth morale against heightened Nazi aggression. 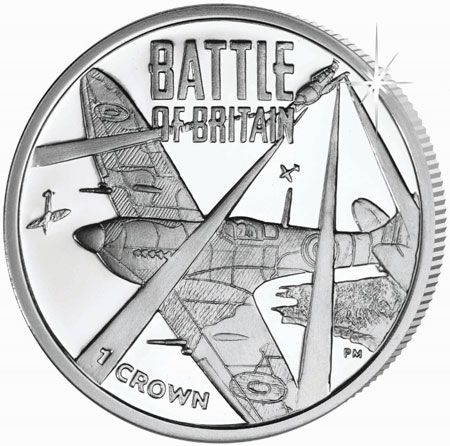 The coin itself features a British Spitfire flying over the White Cliffs of Dover with a German Messerschmitt on its tail. The obverse of the coin carries the fine effigy of Queen Elizabeth II, Lord of Mann, by Ian Rank-Broadley FRBS. 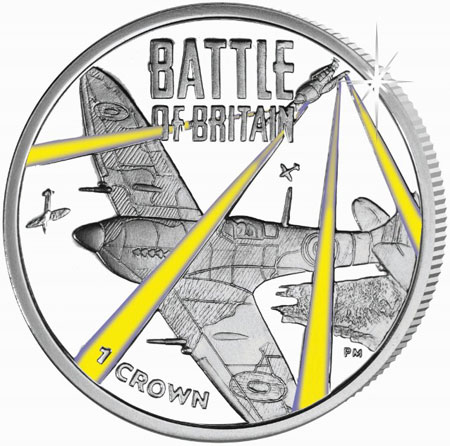 Available in Cupro Nickel and Proof Sterling Silver, both versions are also available with the searchlights colored drawing you into the center of the air battle.

For more information on these and other coins issued by the Isle of Man treasury, please visit the website of the Pobjoy Mint, UK at: http://www.pobjoy.com/products/commemorative-coins/latest-issues?orderby_sort=title|asc&category:year=14|183 Information offered in English, International orders dispatched.