The Treasury & Government of the Isle of Man have announced the issue of a new crown coin which will mark a very special milestone for the Island’s head of state, that is of course Queen Elizabeth II who is formally referred to as the Lord of Man. Not only for the Isle of Man but for the United Kingdom and the commonwealth, Queen Elizabeth will, on the 9th September, reign the longest of all English and British monarchs – surpassing the record created by her Great-Great Grandmother Queen Victoria who herself, reigned for a total of 63 years and 216 days. On the 24th September 1896, Queen Victoria actually surpassed the reign of her Grandfather King George III who himself reigned for a total of 59 years, 96 days from 1760 to 1820.

The Queen’s reign began on the 6th February 1952 when the new 25 year old princess and heir-presumptive succeeded her father, the ailing King George VI as monarch of the United Kingdom and the British Empire. The king had been ill for some time and it was known within his immediate family that he was terminal. Princess Elizabeth had agreed to tour the African colonies with her husband the Duke of Edinburgh, and it was in Kenya that she had learned of her father’s death. The new Queen had returned immediately to London and it was at the airport that Princess Elizabeth, now Queen Elizabeth II where she received her new ministers, on the tarmac of the runway who bowed to and saluted their new monarch.

The Queen’s reign, close to 64 years has witnessed many changes to both the United Kingdom but also to the Empire, referred to as the Commonwealth of Nations, many countries of which still recognize the Queen as their head of State including Australia, Canada and New Zealand. She has in-arguably become the most famous woman in the world for all these years with her image included on more coins and banknotes than any other person in history – attested to by the Guinness Book of World Records.

Queen Elizabeth also holds the record as the country’s oldest monarch, at 89 years of age, the UK and commonwealth are preparing to celebrate her 90th birthday in April 2016. The Queen is the longest married monarch who has shared her life with Prince Philip, the Duke of Edinburgh for almost 68 years. 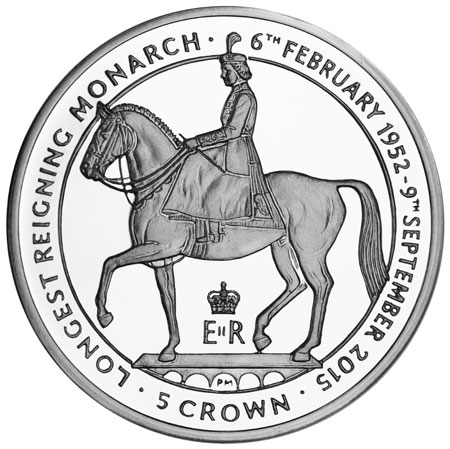 The coins, three in total including a five-ounce option are produced by the Pobjoy Mint UK on behalf of the Treasury and Government of the Isle of Man. They depict Her Majesty on Horseback which is taken from the Queen’s original Great Seal of the Realm. The Great Seal is an implement that is used to symbolize the Sovereign’s approval of important state documents. Sealing wax is melted in a metal mold and impressed into a wax disc that is attached by cord or ribbon to documents that the Monarch wishes to make official. Each time a new Monarch accedes to the throne, a new Great Seal is produced and is only replaced for a particular Monarch if the silver plate wears out. The obverse of the coin features an effigy of Her Majesty Queen Elizabeth II, Lord of Mann, by Ian Rank-Broadley FRBS. 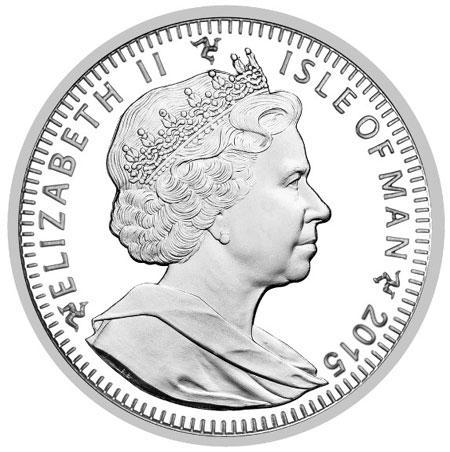 Available in Cupro Nickel (BU), Proof Sterling Silver and 5oz Fine Silver, the coins are struck to the highest quality with the precious metal versions being produced with a pristine ‘proof’ finish.  The design on each coin is in relief with a glorious mirror-finish background.

For more information on these and other coins issued by the Treasury & Government of the Isle of Man, please visit the website of the Pobjoy Mint at: http://www.pobjoy.com/products/view/isle-of-man-2015-hm-queen-elizabeth-ii-longest-reigning-british-monarch-ste Information offered in English, international orders dispatched where applicable.