The Treasury of the Isle of Man Government have issued a gold coin in time for the holiday season which highlights a classic Christmas carol with an innovative “privy mark.” The new “2014” dated gold coin includes an appropriate “pipes” design just to the right of the coin’s principle design.

Every year the Isle of Man Treasury issues a 1/20 oz Gold Angel bearing a special Privy Mark on its reverse reflecting a Christmas theme. Since 2004 the Privy Mark on these special Christmas Angels have taken us on a journey through “The Twelve Days of Christmas” with the Privy Mark each year representing a different verse of the well-known Christmas carol. This year’s coin carries a Privy Mark representing ‘Eleven Pipers Piping’ and is the penultimate in this 12 coin series. This special edition has a limited edition of 1,000 coins worldwide, making this a perfect collector’s coin. 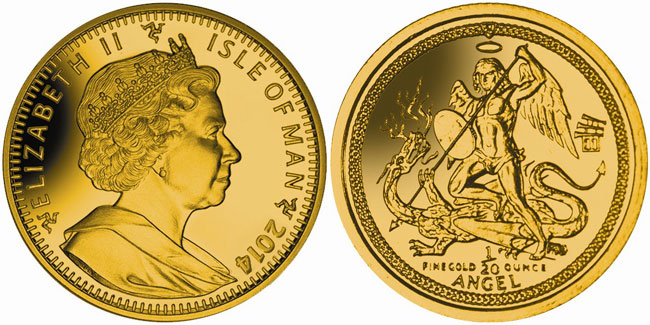 The “Angel” is also celebrating a milestone anniversary, its 30th birthday. As part of remembering the launch of this iconic and widely collected bullion and collector coin, the first reverse design of St. Michael slaying the Dragon used on these first coins in 1985, has been taken out of retirement for this special anniversary year.

Since medieval times, Angel coins bearing the design of the Archangel Michael slaying the Dragon have been thought to bring good luck and health to the bearer and this modern Angel continues to uphold this remarkable tradition. The obverse of the coin carries an effigy of Her Majesty Queen Elizabeth II by Ian Rank-Broadley FRBS.

Struck by the Pobjoy Mint UK, each coin has been produced to the highest quality and is detailed to perfection having been struck four times to achieve stunning sculpted relief contrasted against a mirror brilliant background.

For more information on this and other coins issued by the Treasury of the Isle of Man Government, please visit the website of the Pobjoy Mint at: http://www.pobjoy.com/ukworld/section.php/815/0 Information offered in English, international orders dispatched.

** Michael Alexander of the London Banknote and Monetary Research Centre will be speaking with the US official Distributors, Asset Marketing Services about the 30th anniversary of the Isle of Man Angel coins, read the interview here on Coinupdate.com coming soon **