The second commemorative coin issued in the United States recognized the same event as the first, although it was a smaller denomination, served a different purpose and experienced considerably slower sales. This is the 1893 Isabella Quarter Dollar, which is the only quarter dollar commemorative ever issued by the United States Mint. Issued in conjunction with the 1893 Columbian World Exposition in Chicago, the issue was not contemplated nor authorized prior to the exposition itself; it almost came as a hindsight after the 1892 Columbian Half Dollars were already issued.

Not only is the 1893 Isabella Quarter the only commemorative coin issued of that denomination (although it has to be noted that technically the 1932 Washington Quarter was a commemorative as well, which soon was transformed to a regular issue that is struck to this day) it also is the first coin ever struck by the United States Mint to depict a foreign monarch, as well as the first coin featuring a woman that was actually named on the coins. Most coins issued up to that point featured a woman figure as well, sometimes based on a real life person the designer knew, but always named “Liberty” while the true identity of the person was often lost in time. 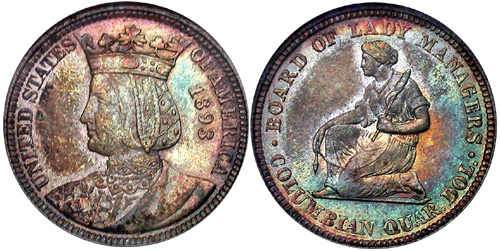 The 1893 Isabella Quarter Dollar was the invention of Mrs. Potter Palmer, who suggested that a coin was issued by the Board of Lady Managers in accordance with legislation to be enacted. In the late 19th century woman were still holding a disadvantage in society compared to men, as for example voting-rights did not yet apply to woman. It thus should not come as a surprise that the idea for a Board of Lady Managers at the exposition came from Susan B. Anthony, the leading woman in the suffrage movement in the late 19th and early 20th century. She herself would be honored on a dollar coin in the late 1970’s, when the world had much changed when it comes to women’s rights.

The coin was designed by Charles E. Barber, who had also designed the contemporary dimes, quarter dollars and half dollars introduced in 1892, as well as the obverse of the Columbian Half Dollar issued for the exposition in 1892 and 1893. The obverse featured an en profil image of Queen Isabella of Spain with a kneeling lady on the reverse, unidentified and most likely meant to represent all women. Legends include UNITED STATES OF AMERICA, BOARD OF LADY MANAGERS and COLUMBIAN QUAR. DOL., which was also the name the coin was initially known by.

As mentioned above this coin is the first coin struck by the United States Mint that depicted a foreign monarch. Queen Isabella I of Castille was together with her husband Ferdinand II of Aragon responsible for completing the Spanish Reconquista and shaping the modern area of Spain. Much more important events, however, came when she agreed to sponsor an Italian explorer, known for his English name as Christopher Columbus, who brought back what he erroneously believed to be natives and gold from islands of the coast of Asia, which in reality were islands in the Caribbean.

The likeness of Queen Isabella appeared on many coins of the Spanish Empire of the late 15th century, in particular gold coins of various denominations bearing the likeness of her and her husband. This emblematic image where the king and queen are facing each other served as the inspiration for the design four centuries later on the one and only commemorative quarter dollar of the United States of America. Like the gold coins struck during her lifetime she is seen facing left, wearing a crown and jewels. The image on the quarter dollar however, also shows artistic improvement by the addition of more detail, in particular in the hair, the jewels, and her clothing.

According to Q. David Bowers, in Commemorative Coins of the United States – A Complete Encyclopedia (Published in 1991 and one of the standard references on the subject) initial sketches were prepared by Kenyon Cox, possibly with help from Caroline C. Peddle, a former art student of Cox. From there, Charles Barber finished the work. The reverse of the design, depicting a kneeling woman, appears to be inspired by an anti-slavery token of the 19th century which is well known in the numismatic world and part of several anti-slavery tokens issued in Antebellum America.

Neither Queen Isabella nor Christopher Columbus could envision at the time what the voyages would do to Spain and the world. For the former, it brought immense riches in the form of gold and silver out of South-America, but it also would lead to the demise of a large part of the Native American population. Over the next centuries it would also lead to massive emigration from the old world to this new world, which unlike Columbus’ initial thoughts was not Asia but the new continent that would be named “America”. After issuance of these commemorative quarter dollars, the women’s suffrage movement increased, leading to more equal rights for women. These events provide some of the rich history of the 1893 Isabella Quarter Dollar, making it one of the more interesting commemoratives issued in the United States.

Even though 40,000 of the coins were initially authorized (a total of $10,000 was authorized by Congress for the issue) total sales for a dollar a piece were lower, making the total number of coins distributed 24,412 coins. The rest were melted at a later date, making this one of the scarcer types of commemorative coins. Unlike the 1893 Columbian Half Dollar none were released for circulation and most of the specimens that exist today are in the lower ranges of uncirculated grades. The coin has increased in popularity over the last half century and high-end examples, like many commemorative coins are much in demand with collectors specializing in them. When holding one of these coins it is interesting to look back on both the late 15th century, the age of exploration, and the suffrage movement as part of our history that might go back before our time, but still has a significant influence on our lives to this day.