The Central and Financial Services of Ireland have advised (10th August) about their latest collector coins to honor one the nation’s most well-known and heroic figures leading up to Irish independence. Michael Collins (Míċeál Ó Coileáin) (1890 – 1922) became known during the Easter Rising in 1916 as a skilled organizer of considerable intelligence. He was a leading revolutionary figure who eventually served his country as Minister for Finance and Teachta Dála or member of Parliament for Cork South in the First Dáil (Parliament) of 1919. Having served as a member of the Irish delegation during the Anglo-Irish Treaty negotiations, Collins was both Chairman of the Provisional Government and Commander-in-chief of the National Army.

Born in Sam’s Cross, near Clonakilty, (West County Cork, Ireland) Collins was the third son and youngest of eight children. On the 22nd August 1922, while on his way to meet the troops of the new Irish army in County Cork, his car was ambushed at Beal na mBlath. Collins was fatally shot by a member of the local Anti-Treaty IRA. His body was immediately returned to Dublin by steamer for fear that it might be stolen if transported on the roads. He lay in state for three days at Dublin City Hall as thousands of mourners filed past to pay their last respects. It was reported that more than half a million people attended his funeral, representing one fifth of Ireland’s population at the time. Michael Collins was only 31 years old at the time of his death. 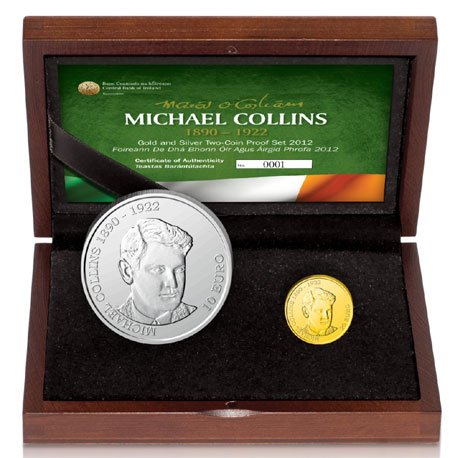 The obverse of both the gold and silver Michael Collins commemorative coin depicts the national hero in a front-facing portrait which is based on an actual photograph taken not long before his death. The obverse design is the work of eminent artist Thomas Ryan who attended the Limerick School of Art & the National College of Art in Dublin. Ryan is best known for his previous work with modern Irish coinage including the Irish £1 coin featuring a red deer, which was introduced in 1990, replacing the £1 note. Ryan is also credited with the designs for the 1988 Dublin Millennium 50p coin, the 2008 gold and silver Antarctic explorer coins and the 2011 gold proof Celtic Cross coin. The reverse or, national side of the coin depicts the 14 string Irish harp modeled on the ‘Brian Boru’ harp which is housed in Trinity College, Dublin. This harp has been used on Irish coins since 1928 and Ireland has the distinction as the only country in the world to use a musical instrument as its national symbol.

Struck by the Mint of Finland to proof quality, the gold coin is minted in pure .999 fineness with a weight of 0.5 gram and a diameter of 11 mm. A total mintage of 12,000 pieces has been authorized. The silver coin is struck in sterling silver with a weight of 28.2 grams and a diameter of 38.6 mm. A mintage of 14,000 pieces is authorized. The Central Bank of Ireland are offering the gold and silver coins as separate items or a two coin set with a total number of 6,000 issued.

For more information on these and other coins on offer from the Central Bank of Ireland, please visit their website at: http://www.centralbank.ie/paycurr/collector/Pages/Coinsets.aspx International orders are accepted.

**EXCLUSIVE** Michael Alexander of the London Banknote and Monetary Research Centre will be attending the official launch of the Michael Collins commemorative coins on Wednesday 15th August in Cork, Ireland. Photos and comment of the event will be posted on Thursday.