Higher pricing will soon go into effect for the United States Mint’s 2012 Infantry Soldier Silver Dollar. The commemorative coins were released on February 16, 2012 and have been available at lower introductory pricing. 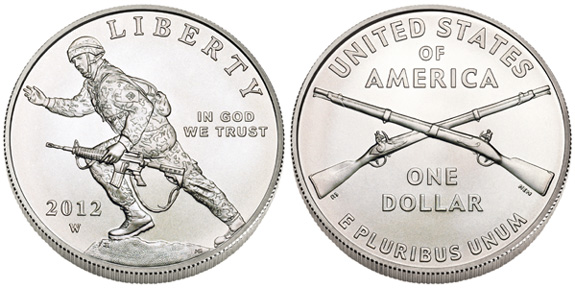 The coins were authorized by Congress to commemorate the legacy of the United States Army Infantry and the establishment of the National Infantry Museum and Soldier Center. The obverse design features a modern Infantry soldier charging forward and motioning others to follow to symbolize the “follow me” motto of the Infantry. The reverse design features the crossed rifles insignia, the branch insignia of the Infantry.

Sales are expected to continue at regular prices until mid-December or until the entire maximum authorized mintage of 350,000 coins has been sold. As of the latest sales report, sales across all options have reached 149,062. The Defenders of Freedom Set, which is subject to a product limit of 50,000, has sold 42,420 units.

For orders and additional information, visit the US Mint’s website http://usmint.gov/