Over the past few years, interest in Chinese numismatics has increased, both from China as well as from investors in other countries. With a population of over 1.3 billion (and growing) this is not that much of a surprise, especially with a fast-growing economy and a growth of what we would call the “middle-class”. Interest goes out to both the older issues, in particular certain Provincial issues which have seen records at auctions during the past year, as well as modern commemoratives. This article will focus on some of the latter, struck since 1979, with its famous Panda series as a start. There are also other series that boast beautiful designs, interesting issues and the history of a civilization that goes back many thousands of years.

Introduced in 1982, the Panda coin series was popular since its first release, although like other Chinese coins it has seen a tremendous increase in prices and interest over the last few years. With annual changing designs on both the gold and silver issues, a plethora of commemorative issues, and struck in several different metallic compositions, one could easily collect pandas for a full lifetime and still not be complete. Yet there are several “subsets” of the several denominations that can be collected and that might prove excellent values over a longer period of time.

The basic denominations that have been struck are one ounce silver coins (Proof strikes which were introduced in 1983 initially had a weight of 27 grams, or a little under an ounce, while the BU series did not start until 1989 by which time the weight had increased to a full ounce of silver) as well as gold coins ranging from 1/20th of an ounce to a full ounce. In addition to those basic weights (the denominations have changed over time) other regularly issued coins were struck in half ounce silver, five ounce silver and twelve ounces of silver, with recently a silver kilo panda introduced to that line as well (having 32.15 ounces of silver). The gold version follows the same pattern, albeit obviously at a higher cost, with a few special issues having been struck up to five kilos of gold. 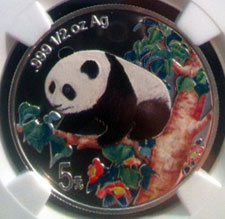 Initially introduced as Proof coins, the Proof silver Panda series is a separate subset with often different designs from the BU coins which lasted from 1983 to 1996, with no coins struck in 1986 and 1988 and colorized versions that are often included in the set struck in 1997, 1998 and 1999. This is a very popular set which has low mintages (especially compared to the BU coins) and is not all that easy to complete. From 1989 to 1994 the Proofs had a small encircled “P” on the obverse that distinguishes the pieces from the BU coins, although the last few issues of the series do not have this feature, as it was no longer considered to be necessary as they had different designs.

From 1993 to 1998 half ounce silver coins were struck in BU quality as well. These are much scarcer than the one ounce coins because they were not much demanded at the time, and make for an affordable set right now. Once more collectors realize the value of these smaller Pandas, we might see an increased interest and higher prices as a result. The most difficult issue of this small run is the 1998 regular issue, which despite having an authorized mintage of 100,000 pieces is very difficult to find, with estimated populations somewhere around a few thousand coins in total. Four special issues were struck, two for the 1997 and 1998 Hong Kong shows and two colorized versions of the same year.

Five and twelve ounce silver pieces are also frequently encountered but had smaller mintages and are more expensive to acquire. Without doubt a full set of either of these two denominations results in an impressive display. The same goes for the gold coins of any denomination. Also struck in both Proof (from 1986 to 1994) and BU format (from 1982 on), the Proof coins came in sets while the BU coins were and are individually released. The 1/20th ounce, 1/10th ounce and one ounce are the most frequently encountered, while the 1/4th and ½ ounce gold coins can be very scarce for some years, as demand for those denominations was generally less. 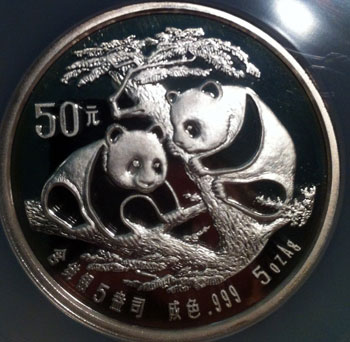 In addition to these basic sets there are also medals struck for coin conventions, as well as commemorative issues that were released for a variety of different reasons, often anniversaries of large companies in China. These often have the same design as the regular Panda coins of that year, with added words denoting the commemoration around the periphery. These are very scarce and often tightly held, making a full set extremely difficult to complete. Finally, there have been Pandas struck in a limited number of years in platinum, palladium, as well as bimetallic compositions. 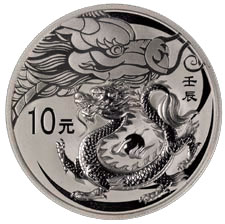 Another popular series that was introduced the year before the first Panda coin was struck is based on the popular lunar, or zodiac calendar. The lunar calendar is based on the Chinese Zodiac of twelve animals, each of which is associated with its Earthly Branch, which in turn originated with observations of the orbit of Jupiter. Somewhat similarly to the Western zodiac, the coin series devoted to this important part of Chinese culture started in 1981 with the year of the rooster (the traditional Chinese Zodiac starts with the rat).

The Lunar series is extremely popular since the Zodiac signs play such an important part in Chinese mythology and culture. While initially each year only saw one gold and one silver coin released in limited quantities, the 1988 year of the dragon changed this, when the Chinese Mint released four gold and four silver coins, as well as a platinum coin. The dragon is a powerful creature that is much celebrated in Chinese culture, and dragon years generally see an increase in births, as many consider the people born under this zodiac sign to be blessed.  It shouldn’t be a surprise then that Chinese coin mintages are generally high in dragon years as people pick up gifts related to that year.

The Lunar coin series is one of the more diverse coin series that the Chinese have produced and can be a joy to collect, as the designs are generally quite beautiful. Besides the regular round issues, there have also been coins struck on planchets in the form of a flower, first in 2/3 ounce silver and ½ ounce gold (starting in 1993 with the year of the rooster) before switching to 1 ounce silver in 2001 (the gold issues remained the same weight). Larger issues have also been released, up to 1 kilo of gold with mintages of 15 coins each year since 1995, the year of the pig. The latest introduction has been a silver coin struck in 1 ounce silver in the form of a fan (in 2000). Besides gold and silver coins a very limited number of coins have been struck in platinum as well after 1988. In recent years colorized coins have been produced as well.

Another popular theme of modern Chinese coins is the Olympic Games. The first Olympic-themed coins were produced in 1980, which was a series commemorating the Chinese Olympic Committee, struck in copper, silver, and gold, which was followed the same year with a series commemorating the 13th Winter Olympics in Lake Placid. Olympic coins have not been a steady series, with no coins struck to commemorate the Sydney and Athens Olympics. For the Beijing Olympics, however, coins were released over a period of three years (2006, 2007 and 2008) in various different forms and shapes. 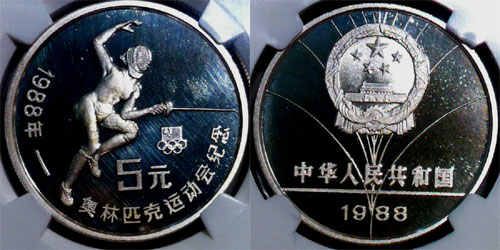 A full set of Olympic coins is virtually impossible to complete thanks to a 10 kilogram gold coin with a mintage of 29 issued in 2008, but a sizeable set of Olympic coins can still be completed and are still relatively affordable. Mintages are relatively low (as is the case with most Chinese commemorative coins) yet remain affordable as the majority of the public focuses on Lunar and Panda coins right now. Besides the Olympics, the Chinese have also commemorated other big sporting events, including somewhat surprisingly the world cup of Soccer, in which China never has been a big player. The Asian Games are also a popular subject, a multi-day sporting event in which the Chinese often triumph.

Focusing on the heraldic animal that originated in Greek mythology, the Unicorn was the subject of a short-lived Chinese coin series of the 1990’s. The series only lasted from 1994 to 1997 yet produced a number of true rarities. Mintages are generally low (as few as a few hundred for some years, in particular the platinum coins, and only a few dozen of the large gold coins) but the designs are heralded as artistic and beautiful.

As other Chinese commemorative coins, many different issues were produced over the four years, ranging from tiny 1/20 ounce gold coins to massive kilo coins and everything in between, including bi-metallic coins. Very popular in China and seeing an increased interest from other parts of the world, many issues are tightly held in collections around the world and are not at all easy to find.


Other popular series and coins

There are also many others series that are worthy of being mentioned, such as the endangered wildlife series, which was produced from 1988 to 1997 in five series, all in gold or silver featuring endangered animals native to China. This series was never really popular but boast some beautiful designs and low mintages. A 5 ounce gold coin released in 1997 is the rarest issue with a mintage of only 188 coins, although other coins in the series are also difficult to find, especially in high grade. 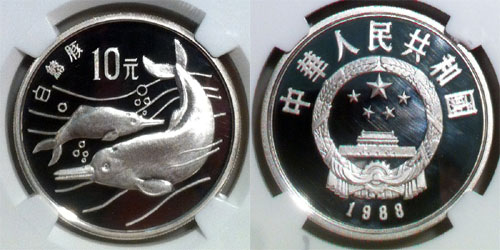 The Ancient Inventions & Discoveries series highlights Chinese history and is another series that was produced in the early 1990’s, a full set which is extremely difficult to complete thanks to many different issues with extremely low mintages. The same goes for the Outstanding Historical Figures set, which was produced from 1984 to 1993. Other popular and interesting series focus on Chinese folklore and customs, Marco Polo, certain areas of China (including Taiwan, which can be a point of political discussion) and many more. With many of these issues having become extremely difficult to find and expensive as a result, there are still some issues that can be undervalued, and could see strong price increases in the next few years as the Chinese economy continues to grow.

When one picks up a world coin catalog from as recently as 2010, the Chinese coins section can be thrown away as far as price indication goes. Many issues are listed for literally pennies on the dollar, with many having seen prices realized that are many, many times the prices listed in that still relatively recent catalog. This does not mean that a further increase in prices is no longer possible, and many coins continue to go up in price both inside and outside of China. Whether this continues is the multi-million dollar question that nobody can answer, but it never hurts to pick up a few pieces here and there that have nice designs that you can appreciate.