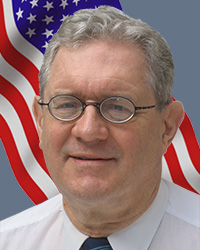 Robert Hoge was sworn into the Citizens Coinage Advisory Committee (CCAC) on April 26th, 2012. He was appointed as the member specially qualified to serve by virtue of his education, training or experience in numismatic curation. Mr. Hoge is curator of North American Coins and Currency for the American Numismatic Society (ANS), and an award-winning columnist of ANS Magazine. In addition, he is president of the New York Numismatic Club. From 1981 to 2001, he served as curator for the ANA’s Money Museum in Colorado Springs and manager of its Authentication Bureau. Mr. Hoge holds a Bachelor of Arts degree in anthropology and history from the University of Colorado at Boulder, and a teaching certification in social sciences.

Mr. Hoge agreed to answer some questions regarding his entry into numismatics, and his thoughts on the U.S. Mint and the CCAC.

At ten years old, I found a coin (it actually turned out to be a token) in the dirt floor of a garage/shed at my family home. This piqued my imagination, and I wanted to identify and learn something about it. The thing appeared to be a $20 gold piece, but was clearly made of brass. It was very badly worn and pitted, but eventually I was able to figure out that it was a circa 1850s spielmark. My parents started supporting my new interest by encouraging me and giving me actual old coins.

With some coins initially given to me by family members and friends, I began reading about coin collecting and studying the relationships of numismatics to history and archaeology. I saved all the older or more unusual ones I could find, and was thrilled when other school children showed me different coins that they had found or gotten from their parents. Scouting introduced me to the idea of collecting coins by series. My father had collected U.S. coins years earlier, and started giving me his partially-filled little blue Whitman albums. My mother made note of interesting coins that I happened to have mentioned, and began to hunt for dealers from whom she could get some for me as little gifts. I started seeking magazine advertisements listing coins for sale and upcoming coin shows, started acquiring a few inexpensive coins from dealers, and bothered my parents to help with this. I had a broad interest in the past, and a good memory; consequently, my numismatic proclivity burgeoned.

I do not actively collect anything today, although in the past my numismatic interests have varied fairly widely, to the extent I could afford to make occasional purchases. From my initial fondness for Early American coins, I moved toward ancient and oriental issues as I studied languages and cultures, and I have collected many series — as long as they contained diverting items that were relatively inexpensive. I never managed to complete any sets of United States coins of any kind, unfortunately, but I suppose I should confess that I do possess examples of coinage of most of the Roman emperors and British monarchs, for example – areas in which I have devoted more focused study.

I’m afraid that I do not have a certain most-prized specimen in my collection. I like every item, for one reason or another, or I wouldn’t have it, would I? Indeed, I prefer items that are historically interesting, artistically appealing, rare and valuable. Who doesn’t? (Luckily for collectors, many items share these characteristics to some degree.) I prize many of my coins for nostalgic reasons of one kind or another, too. I’ll cite a few of my favorites: a Fugio copper, a Pine Tree shilling, a Washington 1795 penny, an 1803 Large cent, Flying eagle and Indian Head cents, a Roman denarius of Julius Caesar, a Mexican 2-reales of 1783, pennies of Aethelred “the Unready” and of William “the Conqueror,” a Frankish mancus imitating a dinar of the Arabian ‘Abbasid caliph Al-Mansur, the tetradrachm of ancient Athens, a stater of Alexander “the Great,” coinage of Olympia, a trifollaro of Roger I of Apulia, Chinese spade and knife coins and early “cash”, a kahavanu of Medieval Ceylon… Don’t get me started explaining my interest in all of these…and I like medals, paper money and tokens, too.

Since reestablishment of the commemorative coinage program in the 1980s and the advent of the State quarters program in the 1990s, the U.S. Mint has made wonderful strides to bring awareness of numismatics to a wider audience. Outside the numismatic “community,” I think the commemoratives are not as well-known as they could and should be, but people in general are definitely more aware of the minor coinages now than they were fifteen years ago. What is not good is the carelessness and extravagance with which Congress treats the coinage programs, making poor decisions for which they are not held accountable.

I have been very actively involved with numismatics as a non-profit educational and cultural endeavor since 1981, serving as Curator for both the American Numismatic Association and the American Numismatic Society, the two principal organizations for coin collecting and appreciation in this country. This work has involved studying and cataloging many thousands of items, writing and teaching about them, and planning, preparing and installing exhibits featuring all kinds of numismatic properties. I was invited to submit an application.

In my opinion, the CCAC has a very important role in trying to ensure that American coins embody the finest qualities possible for depicting national imagery — whether historical, geographical, personal or symbolic. Not all art forms or techniques work well with the modules of coinage, and some ideas and designs are definitely not well-suited for presentation in this medium. The position of the committee, it seems to me, is to arbitrate and ameliorate these distinctions, and make appropriate recommendations for improvements at all stages and regarding all elements.

Just that I am very dedicated to numismatics, that I have no personal “axe to grind,” and that my appreciation and enjoyment of coinage is something I look forward to sharing in this new capacity.