Thomas Uram is the newest member of the Citizens Coinage Advisory Committee (CCAC), appointed on September 12, 2012. Mr. Uram fills the vacancy created in 2010 by the expiration of the appointment of Rev. Dr. Richard Meier. Mr. Uram was appointed based on the recommendation of Speaker of the House John Boehner and will serve for a statutory term of four years.

Mr. Uram agreed to answer some questions regarding his entry into numismatics, and his thoughts on the U.S. Mint and the CCAC.

My earliest coin collecting memory involved my dad’s brother, Mitch. He introduced me to Gordon Dodrill who owned a coin shop in Pittsburgh PA, called The Pittsburgh Coin Company. I would have been about 11 years old then, and I wasn’t even tall enough to see over the display case.

I started collecting through my Uncle Mitch. He was a trust officer at PNB bank. He encouraged me to learn about collecting and suggested that I join the ANA as a junior member. Several years later I joined as a life member. I also joined my local club and received encouragement from that association. I was one of the first participants in David R. Cerven’s ancient coin correspondence course through the ANA.

I collect mainly U.S. coins, Canadian Dollars and Proof Sets. I also collect various Foreign Commemoratives that might be of historic significance. 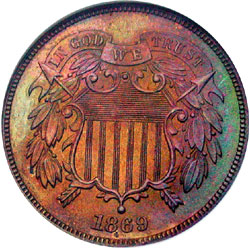 My most prized specimen would be from my two cent collection. I have a 1867 Double Die in MS 64RB (finest in that grade). My Two Cent collection is highly rated and in the top of the PCGS registry. I have won first place in the US Coins category for this exhibit at FUN, CSNS, ANA and PAN. The Two Cent piece has a lot of history with the Civil War as it was the first coin to have the motto: In God We Trust. It has a lot of Treasury interest with Samuel Chase and with the Mint Director, James Pollock. As part of the exhibit, I developed a promotional piece about the history of our nation’s motto.

The Mint is doing a great job with the Kid’s promotions. The 50 State Quarter program has also done a lot to promote knowledge and collecting. In order to reach young people today, you have to use social media—-Facebook, Twitter, etc. Young collectors are buying and getting their information from many avenues. I would encourage young people to join local clubs and perhaps the Mint might consider some kind of club as well.

I have had a strong interest in serving on the committee for many years and made inquiries on how to be considered/appointed.

My initial impression of the committee is that it is a diverse group of people who are extremely proficient in their areas of expertise. Everyone on the committee brings a unique perspective and creativeness to the coin design process. When someone holds the final minted product, they can be assured that a lot of thought and time went into its design and that they are holding something historically accurate in their hands.