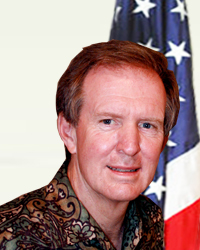 On November 29th, 2011, Michael Moran was sworn in as the newest member of the Citizens Coinage Advisory Committee (CCAC). He is an award winning numismatic author, lecturer, and researcher. He wrote an article about the survival of the United States Mint at San Francisco during the great earthquake of 1906, which won the American Numismatic Association’s (ANA) 2006 Heath Literary Award, and the masterwork Striking Change, about the artistic collaboration of Theodore Roosevelt and Augustus Saint-Gaudens. He is an active member of the American Numismatic Society. He is also a managing partner of a major building products supply company in Western Colorado. He holds B.S. and M.S. degrees from Purdue University.

Michael Moran was recommended to the committee by the current Senate Minority Leader Mitch McConnell (R-KY).

In response to my interview request consisting of questions about his numismatic background and about his opinions regarding the U.S. Mint and the CCAC, Mr. Moran chose to answer my questions in narrative form:

I can’t remember the exact date that I began collecting. The fascination started in the second or third grade more than fifty years ago. My family would visit my grandfather several times a year. Each time he would give me Indian Head pennies. This led to my first Whitman coin album. I still remember the time he gave me a well worn penny from his birth year – 1877. By then I had a Redbook and the coin’s value of $20 lit up my face.

It was not long after that I decided that I was going to own a Saint-Gaudens twenty-dollar gold piece by hook or by crook. For one solid summer I saved my money from mowing neighborhood lawns. Finally at the end of the summer I had the necessary $47.50 plus sales tax for the purchase. It was a common date uncirculated twenty but it was beautiful and it was mine. I took it home and proudly showed it to my father. He looked at the reverse and asked me the coin’s denomination. “Twenty dollars,” I replied. “Well…,” he said. A man of the depression, he had made his point. However, as we all know, I had the last word on that subject.

Over the years my interest has moved from the standard collecting of a particular series to a specific focus on coin art. That Saint-Gaudens double eagle ultimately led to my book, “Striking Change,” published by Whitman in 2007. Now in keeping with that artistic bent, I am collecting souvenir coins from the many regional exhibitions at the close of the 19th Century and the opening of the 20th Century. These tokens were struck on half dollar planchets either at the Mint or in Mint presses moved to the exhibition site specifically for that purpose. Many of these were engraved by either Charles Barber or George Morgan and they form a shadow commemorative coins series for the period. Freed from the design and inscription requirements of legal tender coinage, these tokens or so-called dollars set the real standard for medallic art in the United States. I also collect the award medals from the same exhibitions, which were often executed by former assistants of Saint-Gaudens. These too are fine examples of what American artists could create, given a free hand.

I first thought of serving on the CCAC after my book was published. At that point I was confident I had something to offer to the process. I was unsuccessful in my first attempt in 2007 but made it the second time around. My impression of the CCAC and the Mint support provided is extremely positive. All the members are well qualified and bring unique experiences to the table. The working relationship is excellent. The Mint personnel involved are attentive to the committee’s critiques of the designs under consideration. The CCAC has a key role to play in helping the Mint reach out to the collecting public. The health and growth of our hobby is dependent upon a vibrant Mint collector program.

This reporter is very thankful to Mr. Moran for his time, and to Michael White of the U.S. Mint for facilitating the interview.