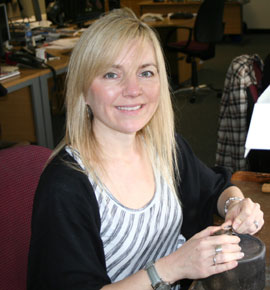 The first Olympic-themed coin, and for the occasion, was a “Hand-over ceremony” two pound coin issued in 2008 which resulted in a sell-out within weeks. The next coin issued in 2009 was the start of a four-year run called the “Countdown series” and would involve a coin issued each year until the start of the Games in 2012. The designer of these striking coins is Claire Aldridge, one of the Royal Mint’s senior designers who has conceptualized her idea of the countdown to the Games on four coins which have been described as both contemporary and artistically challenging. 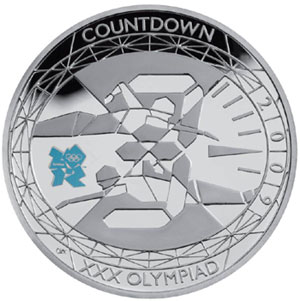 I had the chance to speak with Claire during a recent visit to the Royal Mint, where all of the activity is taking place. We had a chance to discuss the “Countdown” project and how the contemporary-look concept was arrived at. I also asked Claire what kinds of designs catch her eye and why and what lies ahead for her after designing such a high-profile crown series. Olympic coins are currently under production in gold silver and nickel, kiloweight coins, official medals for presentation during the games and most recently, five ounce coins also in gold and silver. The range is one of the most varied for any previous games and truly something for every taste and budget. I’m told that Claire’s four-coin “Countdown” set and the 50 pence 29 coin set with designs from the public has so far been two of the real stars in the Olympic range. It’s likely that these coins will be sought after with the tens of thousands of spectators who will be visiting the Capital during the games. I’m confident that any coin collector visiting the UK during both the Golden Jubilee and the Olympics will be spoiled for choice.

If you’re looking to take home some Olympic gold or silver of your own, make a point of visiting one of the designated Royal Mint retailers and acquire a piece of history in the making, but don’t forget to enjoy the festivities!

First, I want to congratulate you on your Olympic project, the “Countdown series”, I think it was quite a challenge, with this complete, can you describe what you’re currently working on?

Well, since the development of the Countdown series from 2009, my role in the department has changed somewhat, I’m now what we refer to as the “Team leader” which means my role is now more managerial. I still tend to pick up all different kinds of projects but at the moment I don’t have the chance to do much design work specifically because of my supervisory role. The “Countdown” series was actually an internal competition and I’ve had the opportunity to enter other competitions since then.

The “Countdown series” is actually a “first” in Olympic numismatics with regard to the concept of one coin issued each year counting down to the actual games and integrating a design to illustrate this. What was the inspiration for your modern approach to such a traditional event as the Olympics?

To be honest, the competition brief for the series was quite “open”. Some of the themes were obvious such as a ticking clock to depict the counting down. My original designs included a 4,3,2 and 1 concept but the style of the eventual designs all stem from the actual branding of the Olympics. The logo itself is quite angular and sharp, almost triangular in its approach. I looked at this and used it as an inspiration. This was the first series of Olympic-themed coins the Royal Mint was producing and my idea was that it would be appropriate to “tie in” the branding. The brief did request that the logo should appear on the coins. With this in mind I thought I’d have a better chance of winning the competition if the design complemented the style of the logo. The element of the clock was broken down into 4 quarters and a ticking hand moving around each quarter as the years went by and each year concentrates on a quarter. When it was decided that my designs would be used, I was asked to amend the numbers from 4,3,2,1 to the more familiar 3,2,1 and 0. Where the numbers themselves are concerned, they are recessed and the sports and athletes are in relief. The number is polished on the proof strikes creating a strong contrast to the frosted surface of the athletes. The last coin depicts the winning athletes standing on a podium which I think sums up the series quite nicely. 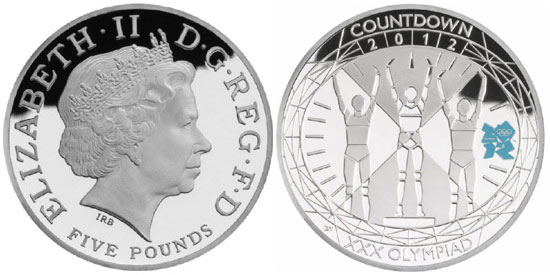 I’m always curious as to those who have influenced the work of many engravers, do you have a specific artist whom you gain inspiration from either one who has been involved with coinage or medallions or hasn’t and if so, who is that artist?

I don’t really have one person in particular, I’m always looking at coin and medal design which comes through the department and as far as UK coin design is concerned, there are some designs which I think are very clever. A coin has such a limited space and as many of our coins commemorate something, it is an amazing skill to sum up an event within those confines, it is an art in itself. In recent times, the trend is to include a lot of text or slogans rather than depiction, and I really prefer the coins which include more imagery. One of the designers whose coins I’ve liked a lot is Mary Milner Dickens, her last coin issued was a 50 pence piece which marked the Women’s suffragette movement issued in 2003, she also designed the 50 pence coin issued for the 150th anniversary of the public libraries act issued in 2000. I think she has a real skill which I really saw as I also competed in the Suffragette coin competition. When seeing her winning design I thought to myself “that’s really obvious” but I hadn’t executed my own design that way. I think she had a real flair for summing up a big event on such a small surface and I think the Public Libraries design of both the building and the book pages which is also a clever example.

Coin design is such a specialized art and as you’ve rightly mentioned, “a skill” and there are so many possibilities these days with the technical aspects of coin production, is there a design or technique you’d like to attempt on a design but haven’t yet done?

Quite a lot of designs come through this department & many of them can be quite technically challenging. Having knowledge of the minting process can sometimes hinder your creativity as we can be “too” knowledgeable as far as what’s achievable in the minting process instead of approaching a project with fresh objectives, we can fall into the trap of thinking “no, that can’t be done” or “it’s too awkward…” When using designs by artists outside the Royal Mint we do fulfill their ideas with sometimes a little compromise. With my own coins I have tended to not “push the boundary” but I think it is good to do this every so often. One coin I think did this was the 2010 “Britannia” designed by Suzie Zamit and although a low relief design, it worked and the look resulted in a very “sculptured” and free flowing approach, I’d like to apply that concept to my own designs. 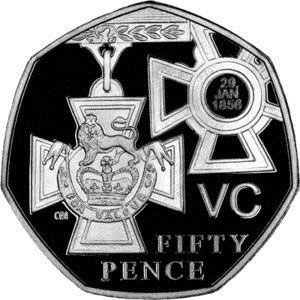 You’ve been involved with several projects since you joined the Royal Mint, can you tell our readers which project you’re especially proud of and why?

That was a few years back which was the 2006 Victoria Cross 50 pence coin I designed depicting the two sides of the medal, I still get some in my change! The Countdown coins won’t actually circulate so for me the VC 50p is still exciting. From the day I started here at the Royal Mint the goal was to have an actual UK circulation coin issued and I think it’s the same for us all who work in this department. One of our aims is to design a coin which is in circulation and although some of our coin designs circulate in other countries it’s not quite the same if you don’t live there. With a UK coin, it’s your design, it’s been chosen and you feel so proud knowing it is in people’s pockets and hands. I hope in the future I’ll have another coin out there… fingers crossed!

I’d surely bet on it and I’ll want to hear all about it before it’s issued. Claire, thank you very much for your time today.