Krause Publications has just shared the newest nominees for the Coin of the Year Award (COTY). Winners will be announced at the 2016 World Money Fair in Berlin.

The nominated coins were dated and issued in 2014. According to the organizers, an unprecedented number of coins were nominated by both national Mints and by international delegates, who represented more countries than ever before.

The COTY’s ten categories included Monaco’s first-ever nomination for their 10 euro silver coin, which portrayed a kneeling figure of Hercules; it was issued as part of their commemoration of the defense of the principality during the First World War.

Panama, which circulates US coins and currency, was nominated for the first time for their half balboa copper-nickel coin celebrating the 100th anniversary of the Panama Canal’s inauguration. Estonia received its second nomination in the history of the COTY’s for their 10 euro silver coin honoring composer Mina Herrman in the category of “Best Crown”.

Falkland Islands has its first nomination ever for their 2 pound coin marking the 100th anniversary of the Battle of Falkland Islands; this is in the category of “Best Bi-metallic.” Also recognized for the first time was the British Antarctic Territory, whose 2 pound coin featuring orca whales is up for consideration in the “Most Artistic” category.

Quite a few countries were nominated for the first time in the popular category of “Most Innovative.” The Cook Islands received a nod for their 5 dollar Anders Celsius Operational temperature gauge. The small South Pacific island territory of Nuie, who has had a prolific numismatic issuing program over the past decade, achieved its first nomination for the 15 dollar Shakespeare’s Romeo and Juliet coin, which cleverly included the entire play in a micro-text insert.

Samoa issued a 1 dollar coin highlighting 50 years of Mars missions and explorations with an unusual design that floats over its own stand using electromagnetism. The Solomon Islands issued a 5 dollar coin featuring the solar system that utilized seven different metals in its production, while Tuvalu’s 1 dollar coin celebrating the 100th anniversary of the first appearance of Charlie Chaplin’s The Tramp included a multi-lenticular image application. 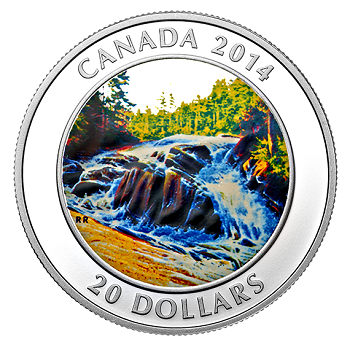 The Royal Canadian Mint has scooped the nominations tables with a total of 11 coins nominated in 8 categories. Among those chosen was the 20 dollar silver coin issued to mark the 100th anniversary of the sinking of the RMS Empress of Ireland. In the “Best Gold” category, their $200 Thunderbird coin was included; in the “most innovative” category, the RCM were nominated for two of their technically advanced applications: the 5 dollar silver bullion Maple Leaf, which includes scan-able security features, and the 20 dollar silver coin, River Rapids, which included a transition effect colorization application.

The Mint of Finland, a favorite with many judges, received a total of five nominations. Austria and France received four nominations apiece, while Italy and Kazakhstan each received three nominations.

Outstanding nominations worthy of attention include the Austrian 20 euro silver coin issued for the 25th anniversary of the collapse of the Berlin wall, which will be considered in the “most historically significant” category. Slovakia’s 100 euro gold coin featuring Prince Rastislav of Moravia was nominated in the “Best Gold Coin” category. As the Mint of Korea will be the guest host at next year’s World Money Fair, they were appropriately nominated in the category “Best Contemporary Event” for their 50,000 on silver coin marking the papal visit of His Holiness Pope Francis.

Greece, who won the 2012 “Most Historically Significant” category, and who continues to be in the spotlight for their impressive designs, once again received multiple nominations. Their silver 10 euro coin featuring a bust of Aristotle will be considered in the “Most Historical” category, while a 200 euro gold coin also featuring a bust of Aristotle was nominated in the “Best Gold Coin” category. Their third nomination, considered for “best bi-metallic” coin, is a 2 euro coin marking the 150th anniversary of the Ionian Islands Transfer of 1864.

The United States Mint has had one of their best showings at the COTY in some time, with a total of four nominations, three of which involved their immensely successful baseball series of coins. The U.S. Mint was nominated for “Best Gold Coin” for the $5 concave strike Baseball coin, “Best Crown” for the $1 silver Baseball Hall of Fame concave strike, and “Most Innovative” for the Hall of Fame curved half dollar Proof coin. The US gold 10 dollar coin portraying First Lady Eleanor Roosevelt was nominated in the “Most Inspirational” category.

Poland, a favorite with the COTY awards, also received a total of five nominations this year for their 10 zlotych silver coin issued for the Canonization of Pope John Paul II; the coin was nominated in the “Best Contemporary Event” category. In the category of “Best Gold” coin, their 200 zlotych piece for the 2014 winter Olympics, Skating was chosen. In the category of “Best Metallic” coin, Poland’s 5 zlotych piece issued to mark 25 Years of Freedom was nominated. Lastly, in the category of “Most Inspirational,” they received a nomination for their 10 zlotych silver issued to mark the 100th anniversary of birth of Jan Karski.

Portugal has done very well this year, achieving no less than three nominations. This is the best-ever year for the Portuguese State Mint as they were recognized in the category of “Best Contemporary Event” with their 2 euro bi-metallic coin, issued to mark the April 25, 1974 Carnation Revolution. A second coin was nominated in the category of “Best Gold Coin”: the 2.50 euro coin, Portuguese Ethnographic Series – The Yokes. The “Most Innovative” category was certainly going to include Portugal’s clever €2.50 coin that included an off-set gold coin within a silver coin, issued to mark the 100th anniversary of Portugal’s first commemorative Republic coins.

In all, forty-three countries will compete in the next COTY awards. A panel of more than eighty international judges will have the opportunity to cast votes for their favorite coins issued in 2014. From these winning coins, the overall Coin of the Year for 2014 will be chosen. We will be announcing the winners from the coins nominated in the ten categories after the votes are cast and tabulated. Coin Update will have all of the highlights and images from the COTY awards, hosted and sponsored by Krause Publications at the World Money Fair, Berlin, from February 5-7 in 2016.

All of the nominees are listed below: