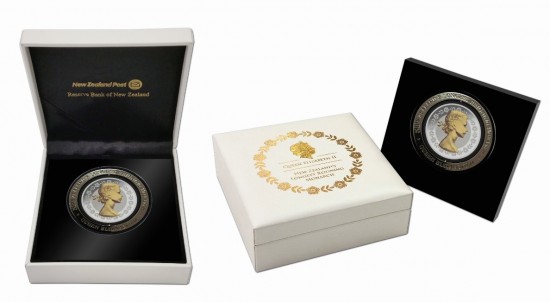 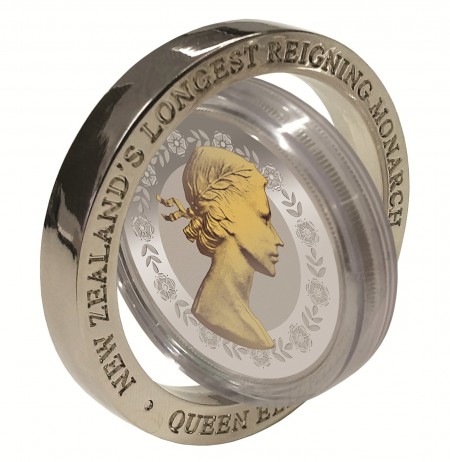 Queen Elizabeth II has visited on several times and has participated in the formal opening of Parliament in Wellington on five separate occasions: January 1954, February 1963, March 1970, February 1986, and February 1990. The Queen most recently visited New Zealand as part of her Golden Jubilee celebrations in February 2002; this visit was believed by royal watchers to be her last.

The coin, produced by the BH Mayer’s Mint GmbH on behalf of the Reserve Bank of New Zealand, is remarkable as it is minted in two parts: an outer ring and a rotating central disc made of zinc, with a nickel finish. This coin has been highly anticipated and received much positive feedback when presented at the 2015 World’s Fair of Money in Chicago. The obverse of the inner coin includes the effigy of the Queen created by Ian Rank-Broadley and used on the coins of New Zealand since 2000. 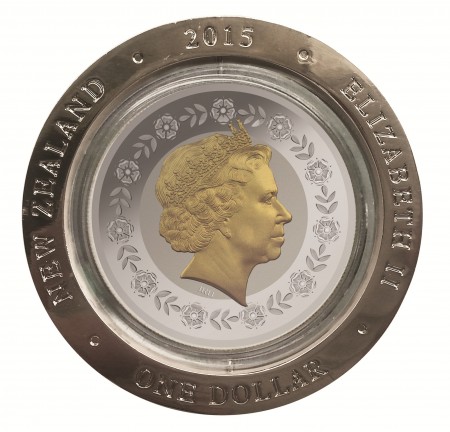 The reverse side includes the portrait of the Queen first introduced in 1953, the year of the Queen’s coronation; it was then used on New Zealand coins until 1967, when the country introduced a decimal monetary system.

The coin is housed in a specially designed leatherette case that will allow you to display and rotate your coin for ease of viewing. For more information on this and other coins offered by the Reserve Bank of New Zealand, please visit the Web site of New Zealand Post, official retailers and distributors. Information is offered in English, with international orders dispatched where applicable.

Update: The New Zealand Post has sold out of this product.