The Reserve Bank of India has issued silver commemorative coins in remembrance of the 150th anniversary of the birth of the country’s national hero, Mohandas K. Gandhi — otherwise affectionately known as the Mahatma, or, “venerable soul.” Gandhi is remembered as the promoter of Indian independence from British rule during his lifetime — effectively campaigning nationwide and abroad, which resulted in an independent India in November 1947.

He was born on the 2nd October 1869 in a coastal town in the state of Gujarat and as part of a Baniya (merchant class family), though his father Karamchand Uttamchand Gandhi (1822–1885), served as the diwan (chief minister) of Porbandar state. As was custom in the day, 13-year-old Mohandas was married to 14-year-old Kasturbai Makhanji Kapadia (1868–1944) in an arranged marriage in May 1883, and she would remain with him until her death. They remained separated, though, for the next three years. Leaving his young wife and newborn son Harilal, who was born in 1888, the young Gandhi was able to study law in London where he was called to the Bar and became a practising attorney by the age of 22. By 1893, Gandhi moved to Cape Town, South Africa, to represent an Indian merchant in a lawsuit and where he would make his home for the next 21 years. It was in South Africa that Gandhi raised his family, where his other three sons would be born and first became involved in nonviolent resistance in a campaign for civil rights. The-then discriminative policies in terms of race in South Africa prompted Gandhi to become more involved in civil rights.

In 1915, Gandhi and his family returned to India, where he joined the Indian National Congress party that espoused independence for India from British rule, becoming its leader in 1920. On the 26th January 1930, the Indian National Congress declared the independence of India. However, the British did not recognise the declaration, but the Congress took a role in provincial government in the late 1930s. A pivotal stance was taken in 1939 when Gandhi and the Congress party withdrew their support of the Raj or British rule when the viceroy declared war on Germany in September that year without consultation. In the face of impending action and the involvement of India in a world war, Gandhi demanded immediate independence in 1942, with the British responding by imprisoning him and tens of thousands of Congress leaders. During the same time, the Muslim League, whose concerns were for the minority Muslim population within India, did cooperate with the British — against Gandhi’s strong opposition. The Muslim League also petitioned for a separate Muslim state, which later emerged as Pakistan. In August 1947, the British partitioned the lands within India and Pakistan, with both nations achieving independence — but on terms that Gandhi disapproved of.

On the 30th January 1948, the man was internationally known for his stance of non-violent protests and passive resistance, and, just two months after independence, was on his way to address a prayer meeting. It was at this time that a Hindu nationalist fired three bullets into his chest from a pistol at close range. He was carried into the bedroom of Birla House (his residence) and died about 30 minutes later. Gandhi was cremated in accordance with Hindu tradition with some of his ashes being poured into urns which were then sent across India for memorial services. The Hindu nationalist with links to extremist causes, as well as several other conspirators, were soon arrested and were tried in court at Delhi’s Red Fort, and many were executed in 1949. 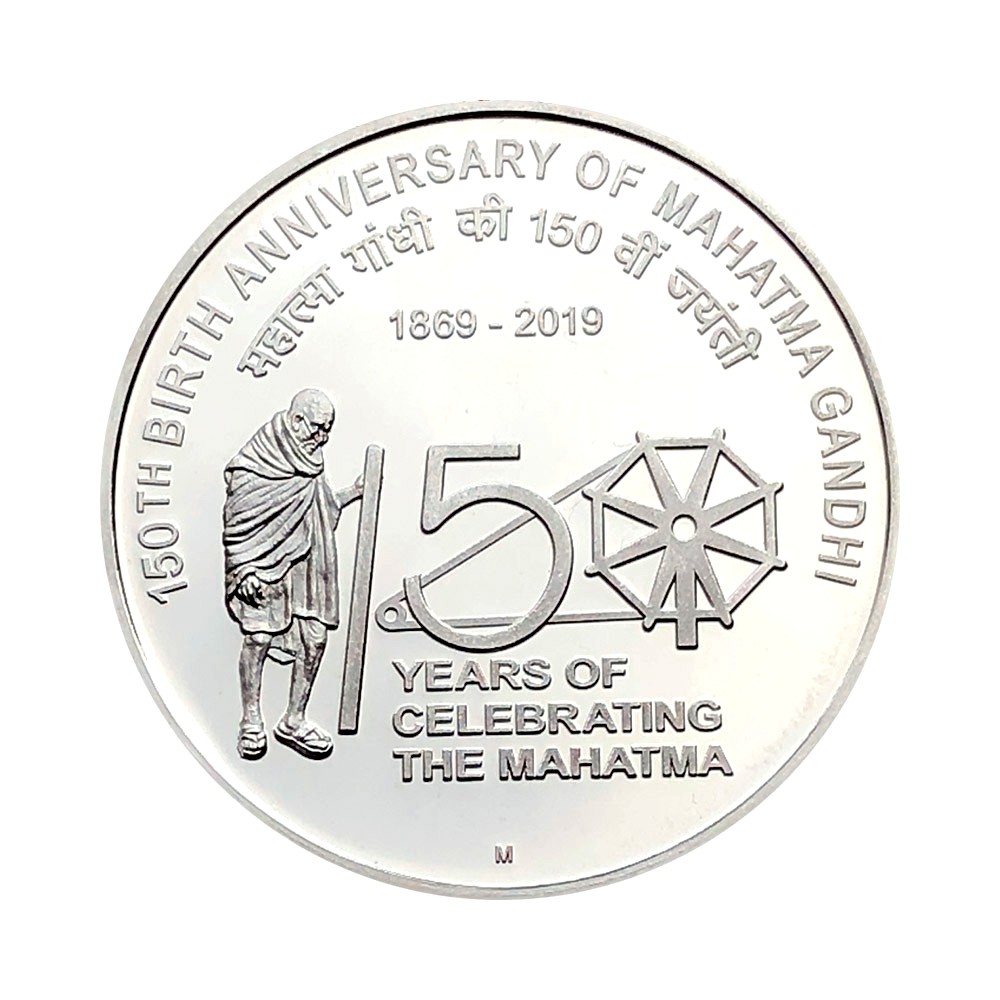 The coins are produced at the Mumbai Government Mint at their facilities in South Mumbai, on behalf of the Reserve Bank of India. The design on the obverse side includes the commemorative national logo celebrating the 150th anniversary of the birth of the Mahatma. The primary motif includes a figure of Gandhi standing next to a traditional spinning wheel incorporating the numerals 1 5 0. The spinning wheel was associated with Gandhi’s crusade to make Indians self-reliant by fabricating their own clothing from local fibres. The symbol was included on the national flag of the Indian Republic. The commemorative text placed above the primary design reads 150TH BIRTH ANNIVERSARY OF MAHATMA GANDHI, with additional text placed below the design: YEARS OF CELEBRATING THE MAHATMA. 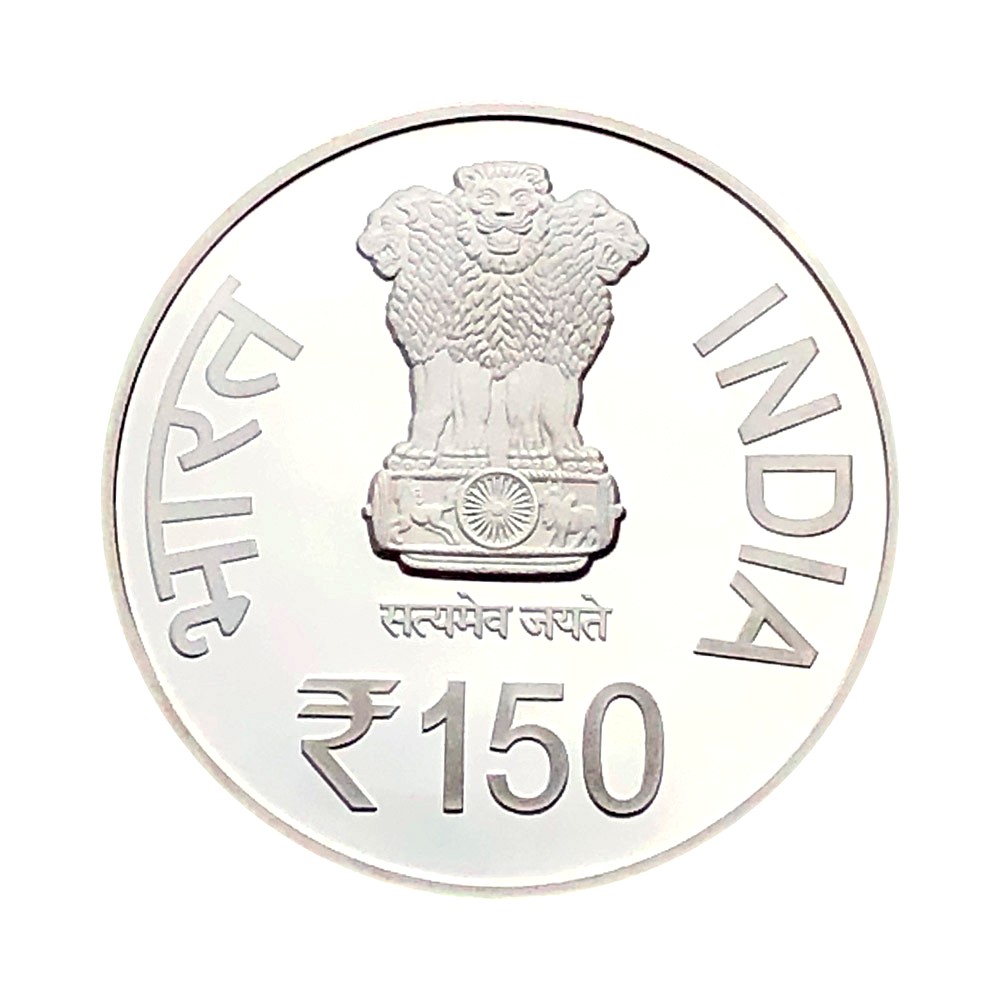 The reverse side includes the national insignia, the Ashoka Lion Pedestal, along with the denomination ₹ 150, which is placed below. The lettering भारत and INDIA are placed on either side of the Ashoka.

The coins are available with or without a custom wood case. For additional information about these coins and others produced at the Mumbai Government Mint, please visit their website.

Romania: New silver Proof coin issued in remembrance of the 75th anniversary of the liberation of Northern Transylvania