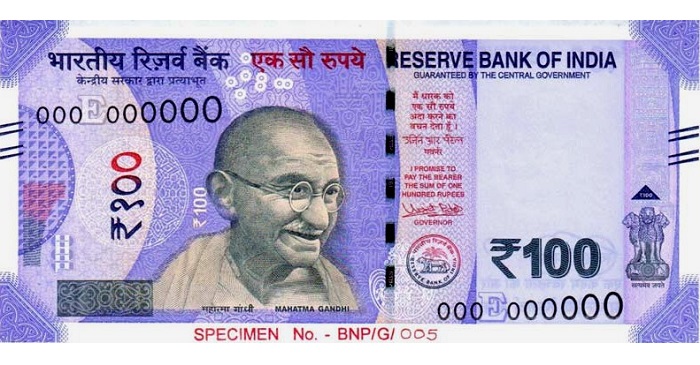 The Reserve Bank of India (RBI) has announced (18th July) plans to issue new 100-rupee banknotes ($U.S. 1.45) which are part of their latest family of banknotes depicting the country’s cultural heritage on the back sides and the Mahatma’s image on the face side. The revised series includes the latest security features and continues their new format of proportionate size according to the value, which sees a graduation of length, but possesses one uniform height. The new 100-rupee note sees a base colour change to a dominant violet or lavender shade and is smaller than the previous version, with the most notable change being the direction in which the Mahatma’s portrait faces.

The new note measures 66 by 142 millimeters, with the revised portrait of the Mahatma Gandhi, whose image was first introduced on Indian banknotes in 1996. The 2018-dated notes include the symbol for the Indian rupee, ₹, which the Reserve Bank introduced to the Indian public in July 2012. The note includes the signature of Dr. Urjit R. Patel, Governor of the Reserve Bank of India.

To the left of the portrait, the new rupee symbol and Devanagari numeral ₹ १०० are shown. To the right of the portrait are the note’s watermark field and the name of the authority, along with the seal of the Reserve Bank of India and the denomination of ₹ 100. There is also a windowed, de-metalised vertical security thread with micro-inscriptions भारत’ and RBI. The state emblem of the Ashoka of three loins is placed to the right edge of the note. The serial numbers, which graduate from smaller to larger sizes, are positioned to the upper left and lower right of the note on the face.

The back depicts the Rani-ki-Vav, or the Queen’s stepwell, which is located in Gujarat and references part of the country’s cultural heritage. The year of issue is included to the left of the field of the watermark, and an image of the Mahatma’s emblematic spectacles is seen below the watermark field, along with wording in Devanagari. To the right of the watermark, a panel of text is included which shows the note’s denomination in several different languages that are predominant in India.