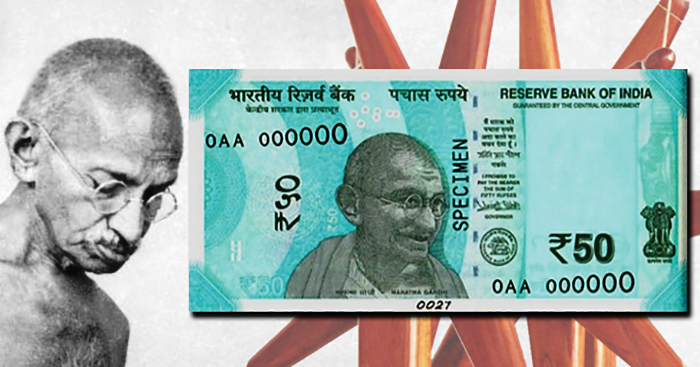 The Reserve Bank of India have announced (18th August) the addition to their latest bank-note series, which was introduced earlier this year. The new note is a 50-rupee denomination and the unusual feature it boasts is that the colour is somewhat fluorescent in appearance. The turquoise-blue note features a portrait of Mahatma Gandhi, whose image was first introduced on Indian bank notes in 1996. The new, updated series also includes new denominations of 2,000 rupees and an upcoming 200 rupees. Both are the first time these values are issued in the Indian economy. Also included on the new-generation rupee bank notes is the symbol for the Indian rupee, “₹,” which the Reserve Bank introduced to the Indian public in July 2012.

The new bank note has been reduced in size from the previous issue and now measures 135 x 66 millimetres, which is in keeping with the new 2,000-, 1,000-, and 500-rupee notes in this updated series. The new note continues to depict the Mahatma on the face, with the portrait now positioned towards the centre. To the left of the portrait, the Devanagari symbol and numeral To the right of the portrait is the note’s watermark field and the name of the authority, along with the seal of the Reserve Bank of India and the denomination of ₹ 50. There is also a windowed, de-metalised security thread with inscriptions भारत’ and RBI seen vertically. The state emblem of the Ashoka is placed to the right edge of the note. The serial numbers, which graduate from smaller to larger sizes, are positioned to the upper left and lower right of the note on the face.

The back depicts the motif of the Hampi with Chariot, referencing part of the country’s cultural heritage. The year of issue is included to the left of the field of the watermark, and an image of the Mahatma’s emblematic spectacles is seen below the watermark field together with wording in Devanagari. To the right of the watermark, a panel of text is included which shows the note’s denomination in several different languages which are prevalent in India.

The Reserve Bank of India have also announced that all earlier notes will continue to remain legal tender. The country was thrown into economic turmoil when, in November 2016, the 500- and 1,000-rupee bank notes were declared invalid by the administration of Narendra Modi after a specific date of exchange. The move was greatly criticised for its lack of forward planning, but was intended to bring to the surface what was believed to be trillions of rupees in the economy which were not declared as income or were earned in the black market. Banks were instructed to accept the soon-to-be invalidated 500 and 1,000 rupees in the first “Mahatma” series in order to offer credit to their customers. The Reserve Bank then introduced the country’s highest bank-note value: 2,000 rupees. This escalated the chaos, as there were few bank notes in circulation to make change for purchases below 2,000 rupees. A 500-rupee denomination followed sometime after. The new 50-rupee bank note is expected to be released before the end of September 2017.