I’ve been pretty harsh on my grading company of choice in my last several posts, criticizing its Secure Plus program, touting NGC’s, and complaining about PCGS “genuine” holders, which seem to have increased in frequency over the past year or so, and probably for good reason: PCGS never liked returning coins in body bags and, in my experience, worked hard to designate a grade rather than a problem. Now that it has the “genuine” option, it can resort to that on close calls–a practice I’m testing, by the way, and will report here my findings in a few months’ time.

But again, it seems, I am criticizing PCGS when I mean to praise it for overall consistency and customer service.

One of the prevalent collector myths concerns PCGS old green holders and how graders were more rigorous in bygone years. Authors like Scott A. Travers in his “Insider’s Guide” manuals frequently make that comment, but for the life of me, every such holdered coin I tried to cross over or crack open to submit as raw has come back with the same–yes, the same–grade. Either I’ve had a run of bad luck, or the best old green holders have been sent in already, with lesser coins still on the market.

Or maybe PCGS deserves praise for consistency over decades.

Earlier this year I sent in a 1938-D Buffalo Nickel from an old green holder, graded MS66. I didn’t want to send the coin in for an upgrade, as the holder could bias the grader; so I broke out the coin and it came back in the same grade. Because of PCGS’s consistency, I’ve stopped paying premiums for old green holdered coins unless I want the coin rather than upgrade. That’s good numismatic advice, by the way; but the point here is to praise PCGS for consistently rigorous grading (genuine designations notwithstanding). 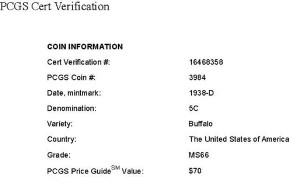 Another hallmark of the company is its customer service whose representatives notify submitters via Internet when their coins arrive, help correct any submission errors, and do so courteously via phone call and professionally via e-mail. Front line employees who represent the company are consistently helpful, to the point of asking me on occasion whether I would allow them to change a category for a coin, because it could save a few dollars. More recently, a dedicated PCGS customer service rep helped track down a lost USPS package containing graded coins and got the Post Office to apologize and deliver the package personally.

Perhaps the executives at PCGS can learn a few tips by relying less on its marketing department and more on its customer service department in maintaining its reputation as one of the top grading companies in the world.