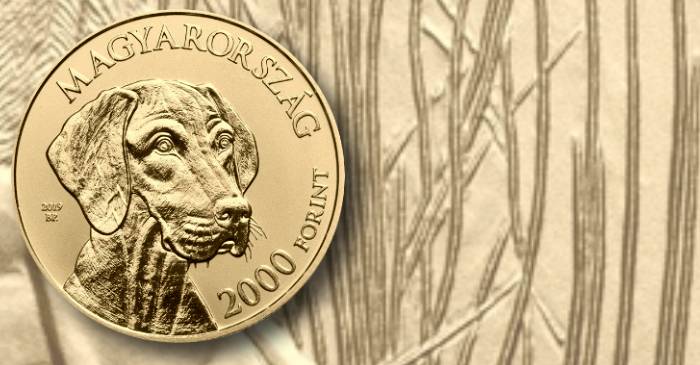 The National Bank of Hungary will issue (9th September) new collector coins which also begin a new series that features some of the country’s indigenous dog breeds. The new series, entitled “Hungarian sheep and hunting dog breeds,” will include a total of nine Hungarian dog breeds issued annually. The first coin will focus on the Hungarian Vizsla, one of the most well-known hunting dog breeds with an international reputation. The breed was consciously bred in the area of Trenčín from 1712. The Hungarian Vizsla is a breed with high stability, with the shorthaired Vizsla variety starting in the 1930s. The first shorthaired yellow Hungarian Vizsla was presented and judged in 1943, with the breed becoming internationally recognised in 1966. These dogs are characterised by elegant external features, a graceful build, and smooth movement. Being gentle-mannered and highly intelligent, some can even stand out among other Vizslas. They are regarded as versatile, not just as a hunting dog, with many often becoming a beloved family pet and child’s playmate. Vizslas, however, are not considered suitable watch/guard dogs due to their relaxed nature.

The golden-colour base metal Reverse Proof quality coins are produced by the Mint of Hungary at their facilities in Budapest, on behalf of the National Bank of Hungary, and are designed by Mihály Munkácsy prize-winning sculptor, Gábor Benő Pogány. His insignia is placed just above the waterline on the reverse side. 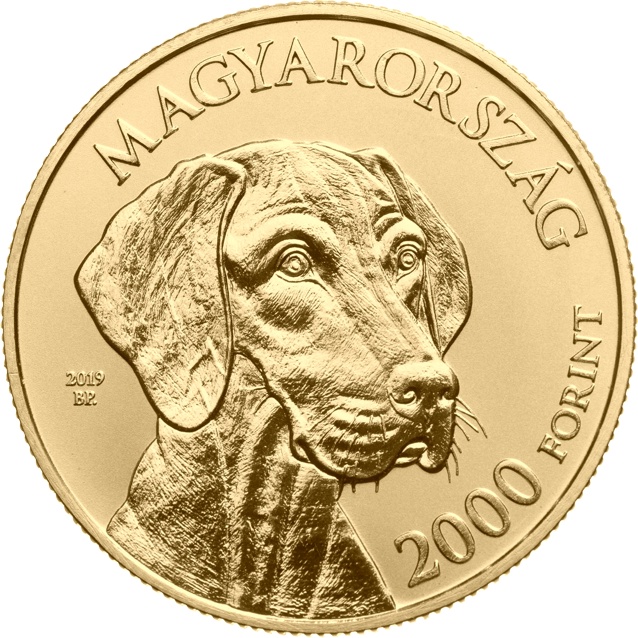 The centre motif on the obverse is a two-thirds profile of the shorthaired variety Hungarian Vizsla’s head, which authentically reflects its obedient nature and the fact that it focuses on the reaction of humans, exhibiting excellent problem-solving skills. These features made this breed popular all over the world. Above the primary design is the lettering MAGYARORSZÁG (HUNGARY), and to the right, the denomination 2000 FORINT is shown. On the left are both the mint year 2019 and the mint mark BP., which are placed as two lines below one another. 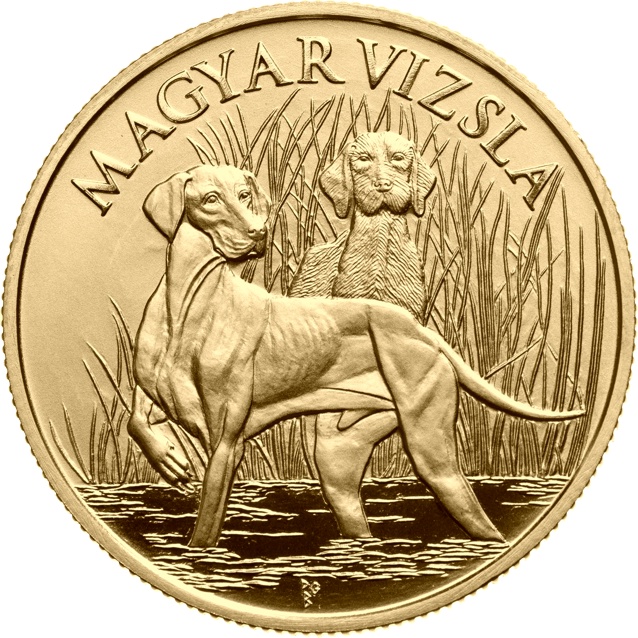 On the reverse is a typical hunting scene which comes alive. As a hunting dog, the Vizsla is a breed capable of performing all kinds of tasks, but primarily it excels in catching small game in the field or in shallow waters. On the reverse, in the foreground, is a shorthaired Hungarian Vizsla treading in water in a typical pose it holds when sensing game. In the background is the representation of a wirehaired Hungarian Vizsla exiting the reeds. Above the primary design is the inscription MAGYAR VIZSLA (Hungarian Vizsla).

Each base metal coin is encapsulated and is accompanied by a certificate of authenticity, while a presentation case is available at an additional cost. For more information about these coins and others issued by the National Bank of Hungary, please visit the website of the Mint of Hungary.

Ordering Information for Interested Collectors in the United States

The coin will be available for $18.95, including free shipping, in the U.S.A. when the mint releases it in Budapest at the end of September. Orders for five coins or more are $16.95 each.

To order, or for more information about these coins and other coins of Hungary, contact the Hungarian Mint’s North American Representative at P.O. Box 399, Williston, VT 05495, call toll-free at 1-800-421-1866, fax 802-536-4787, email , or click on the Hungarian flag here for secure website ordering. Shipping to other countries will be based on actual cost. Vermont residents add 6% sales tax. Those desiring to receive information and photographs electronically on a regular basis can provide their email address to .