On September 21, the National Bank of Hungary issued two new coins to mark the 225th anniversary of birth of one of the country’s most prolific thinkers. Count István Széchenyi (1791–1860), a leading figure in the political struggles of Hungary’s reform era, was a key character in the transformation of Hungarian society. He played an instrumental role in the development of Hungary’s economy and public life, the country’s transportation network, and the use of the Hungarian language in science. Széchenyi is also remembered as having successfully launched important reforms in Hungarian sports. (Scroll down for a biography of “the Greatest Hungarian.”)

The coins, struck in both silver (Proof) and cupro-nickel (Brilliant Uncirculated), are produced by the Mint of Hungary on behalf of the National Bank and are designed by Mihály Fritz. The obverse of this double-sized Crown coin depicts the building of the Hungarian Academy of Sciences, with the statue of István Széchenyi by József Engel in the foreground (see photo near bottom of page).

The main motif on the reverse side of the coin is a facing portrait of István Széchenyi, hands resting in his lap, with a portion of Hungary’s first train timetable visible behind him. A steam locomotive can be seen above the timetable. The silver version is the first 20,000-forint denomination in the series of commemorative silver coins, and it is also the largest coin in the series.

Since 1990, István Széchenyi has been honored on the 5,000-forint banknote.

Both coins are available for their face value; the cupro-nickel edition is produced especially with the younger collector in mind. For more information on this and other coins issued by the National Bank, please visit the website of the Mint of Hungary.  International orders dispatched where applicable. 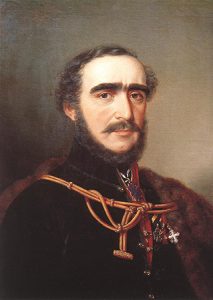 The son of Count Ferenc Széchenyi (founder of the National Museum) and Countess Julianna Festetics (the younger sister of Count György Festetics, the founder of the Georgicont, Hungary’s first university-level institution for the study of agriculture), István Széchenyi spent his youth in Vienna and at the family’s estates in Vas County, at Nagycenk.

He received an education befitting an aristocrat and, later, a soldier. As a result of his travels abroad, his appetite for reading, and his conversations with fellow enlightened thinkers, he came to realize that Hungary lagged woefully behind Europe in many respects. With this exposure to the outside world and its resources, Széchenyi resolved to change conditions in Hungary and to spur the other members of the Hungarian aristocracy to do the same.

While in England, he studied horse breeding, the use of machinery, bridge building and engineering, and investment in other modern technical facilities, while also learning about the constitutional political system. In France and Italy, he made note of outstanding examples of canal construction and river engineering. Back at home he donated one year of his income to founding the Hungarian Academy of Sciences, and also played an important role in the establishment of the National Casino, which served as a vital forum for the exchange of ideas among Hungary’s elite. In his famous works Credit (1830), World/Light (1831), and Stádium (1833), he outlined a comprehensive program for dismantling the feudal conditions in his country and accelerating the development of Hungarian civil or middle-class society. In his newspaper articles, he touched upon almost every aspect of the reform era, from the development of the Hungarian language to the construction of railways. 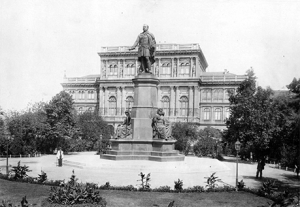 The Hungarian Academy of Sciences, with the Engel statue of István Széchenyi in front, photographed ca. 1890. (Photo courtesy of Budapest City Archives)

Széchenyi’s tireless efforts are especially remembered in Budapest, as he was instrumental in the construction of the famous Chain Bridge, begun in 1842 and spanning the Danube River between Buda and Pest. This engineering contribution was seen as a key step toward uniting the city as Hungary’s capital, furthering its importance in politics, commerce, and the arts and sciences.

For many years, he headed the efforts to regulate the Danube at the Iron Gates, in order to make the river navigable year round and facilitate the flow of Western goods to the East by way of this important commercial route. Lajos Kossuth, governor-president of the Kingdom of Hungary during the revolution era, referred to Széchenyi as the “greatest Hungarian” despite their lack of agreement on political matters.

Széchenyi was Minister of Public Works and Transport in the spring of 1848, helping to develop Hungary’s first nationwide railway network. Unfortunately, his mental health had begun to deteriorate, and he had to resign from this post in September the same year. He was moved to a sanatorium in Döbling, near Vienna, and after several years of treatment and recuperation, his health began to improve and he regained his interest in the world. As the illness did not affect his logic or memory, he soon began writing covert pamphlets against the repressive government that had been imposed on Hungary after the failed revolution of 1848. His activities were discovered by the Imperial police and, despite his standing in society and his good reputation, he was severely threatened, after which his overall health once again deteriorated.

Finally, on the night of April 8, 1860, István Széchenyi committed suicide with a pistol shot to the head. Upon learning of the tragic news, all Hungary mourned his death. The Academy of Sciences, which he founded, went into official mourning, along with the most prominent persons of the leading political and cultural associations.