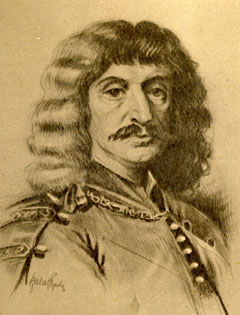 The National Bank of Hungary have issued two new coins which honor one of their country’s most celebrated leaders who has achieved admiration as a military and political leader as well as being recognized for his contributions to Military strategy, Hungarian literature and poetry. On the observance of the 350th year of the death of Miklós Zrínyi (1620 – 1664) the National Bank has issued two coins on which pay tribute to a true Hungarian patriot of the 17th century.

Born in Čakovec (Present-day Croatia) in the Kingdom of Hungary to Juraj V Zrinski, a Croatian and his Hungarian wife Magdolna (Magdalena) Széchy, The Zrinyi’s were a Croatian-Hungarian noble family. From Zrinyi’s earliest years of his education he was an enthusiastic student of the Hungarian language and literature. From 1635 to 1637, he accompanied a canon of Esztergom, a city in Northern Hungary on a long educative tour through the Italian Peninsula. Over the next few years, he learned the art of war in defending the Croatian frontier against the Ottoman Empire, and proved himself one of the most important commanders of the age. 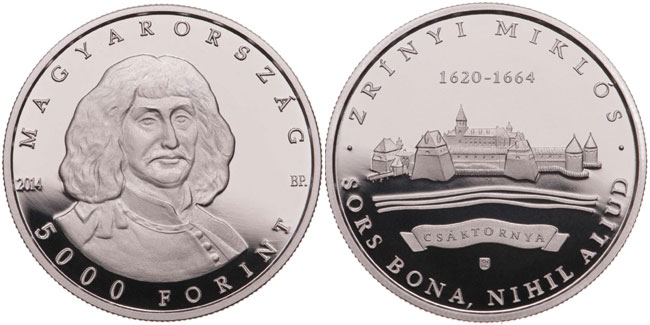 In 1645, during the closing stages of the Thirty Years’ War, he acted against Swedish troops in Moravia and equipped the army corps at his own expense. At Eger in northern Hungary, he saved the Holy Roman Emperor Ferdinand III, who had been surprised at night in his camp by the offensive of Carl Gustaf Wrangel, a high-ranking Swedish noble and military commander. Aside from his military prowess, Zrinyi is also remembered as the author of the first epic poem in Hungarian literature. His most significant literary work, “Szigeti veszedelem” (The Peril of Sziget) or “Zrínyiász”, an epic poem written in the Göcsej dialect of Hungarian, was written in the winter of 1648-1649, and was published, under the title of “Adriai tengernek Syrenája” (The Siren of the Adriatic Sea) in Vienna in 1651. In addition to his poetic works, Zrínyi is also a forerunner of Croatian and Hungarian political thinking and military science. In his essays and manifestos, such as “Mátyás király életéről való elmélkedések” (Reflections on the life of King Matthias) he makes a case for a standing army, a moral renewal of the nation, the re-establishment of the national kingdom and the unification of Royal Hungary with Transylvania. Zrinyi died on the 18th November 1664 in Zrínyifalva (Gornji Kuršanec), in present-day Croatia.

The coins, struck by the Mint of Hungary in Budapest, were designed by László Hunyadi, a sculptor living in Marosvásárhely (present-day Târgu Mureş). The obverse of the coin features a bust of Zrínyi as a grown man and inspired by an earlier sketching of him with the denomination below the primary design. The reverse depicts his place of birth, the castle of Csáktornya, along with Zrínyi’s motto “Sors bona, nihil aliud” (Good luck, nothing else)

The silver coin is also issued as a lower denomination and in base metal. For more information on this and other coins and sets offered by the Mint of Hungary, please visit their website at: http://coins.hu/products/silver_coins/zrinyi-silver-2014-pp.html Information offered in Hungarian, German and English – international orders dispatched.