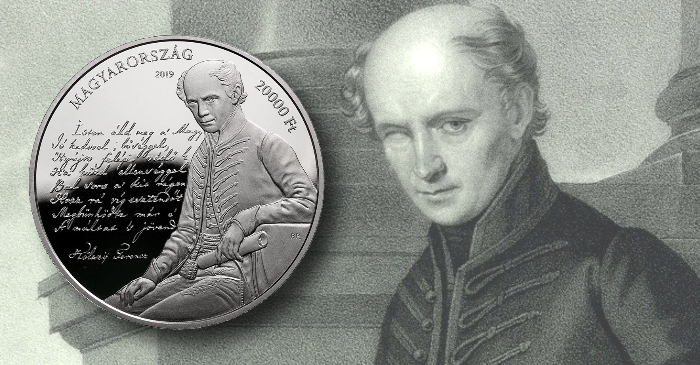 The National Bank of Hungary has issued large silver Proof coins which are in celebration of the country’s national anthem, which was unofficially adopted in Hungary while it was part of the greater Austro-Hungarian Empire in 1844. However, after the collapse of the communist party in Hungary, which governed Hungary from 1946 to 1989, the melody and lyrics were officially adopted the same year. The coins themselves mark the actual 175th anniversary of the first public presentation of the anthem at the Ferenc Erkel Memorial House in Gyula.

It was in 1823 when Ferenc Kölcsey (1790–1838) wrote what was described as the greatest masterpiece of his patriotic poetry, entitled “Hymnus (song of praise) from the Harmful Centuries of the Hungarian People.” The National Theatre published an open competition to combine the words to a melody, also with a romantic character, which was won in 1844 by Ferenc Erkel, (1810–1893), who was a conductor of the theatre. The key to the success of the “Mature Wit and Sober” application towards the focus was that it blended the anthem and the simplicity of the melody beautifully and integrated both Hungarian and European musical traditions.

After Hungary achieved autonomy with the Austrian Empire — thus the Austro-Hungarian Empire the anthem was still considered unofficial. However, in the early 1900s, various members of the Hungarian Parliament proposed adopting the “Himnusz” as the national anthem of Hungary within Austria-Hungary, but their push never got enough broader support for such a law to be passed. The anthem was officially added to the list of national emblems by the 1989 Constitution. Article I of the Fundamental Law of the Fundamental Law, which entered into force on 1 January 2012. The statute states:

The national anthem of Hungary written by Ferenc Kölcsey with the music of Ferenc Erkel is officially adopted.

The first verse of the “Himnusz”:

O God, bless the nation of Hungary, With your grace and bounty
Extend over it your guarding arm, During strife with its enemies
Long torn by ill fate, Bring upon it a time of relief
This nation has suffered for all sins, Of the past and of the future! 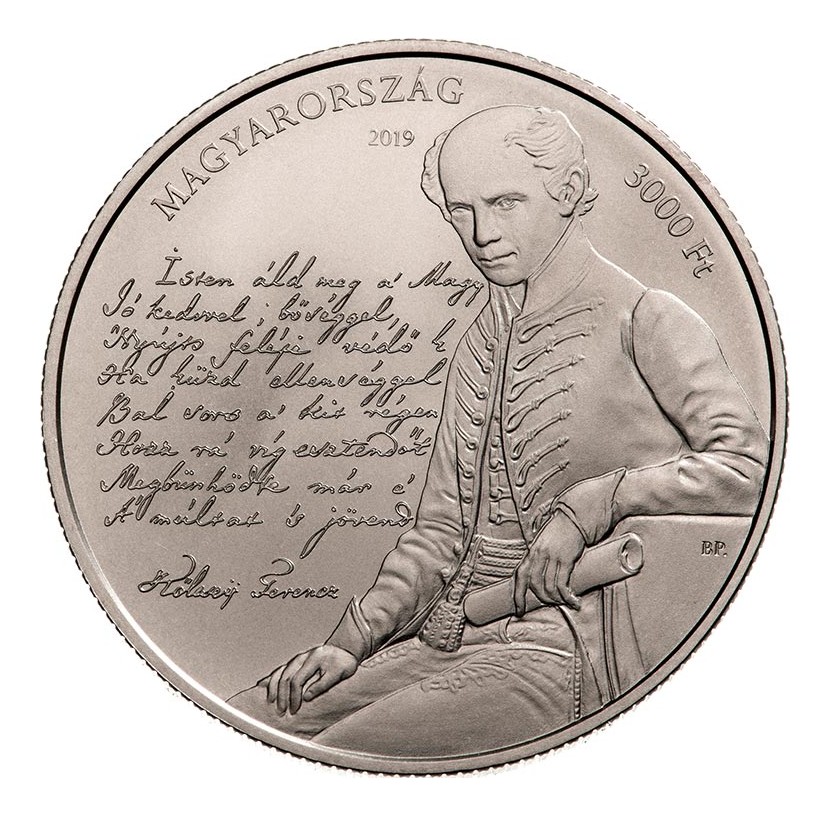 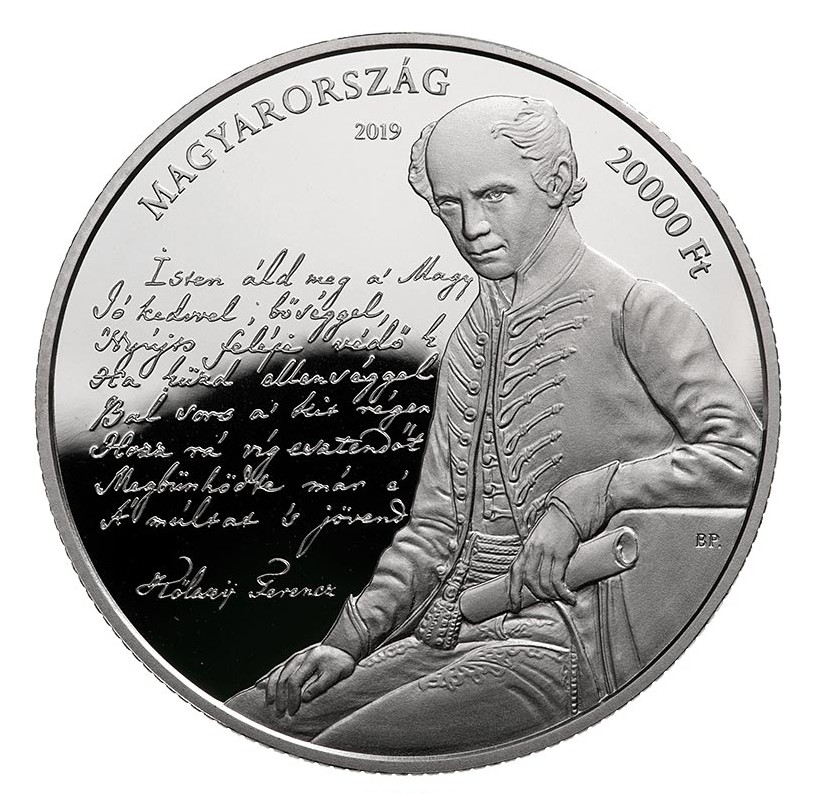 The coins are produced at the Mint of Hungary at their facilities in Budapest on behalf of the National Bank and designed by artist Gábor Kereszthury. A lithography print inspires the obverse design by Franz Eybl, and is additionally inspired by an oil painting by Anton Einsle. Ferenc Kölcsey is shown to the right side — leaning towards the left. The first verse of the hymn is shown handwritten and placed in the background. The inscription MAGYARORSZÁG is placed in an upper semicircle and the inscriptions 20000 Ft (silver) or 3000 Ft (cupro-nickel), respectively. The year of mintage, 2019, is placed just under the lettering along the rim and the inscription “BP,” the denotation for the Budapest Mint, is placed just under Kölcsey’s left arm. 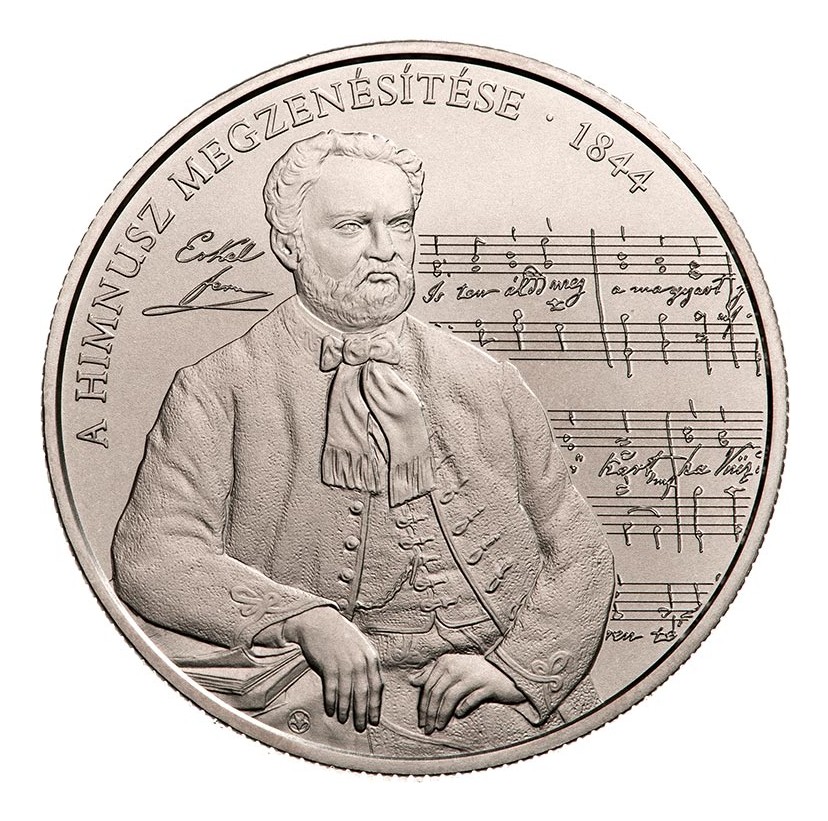 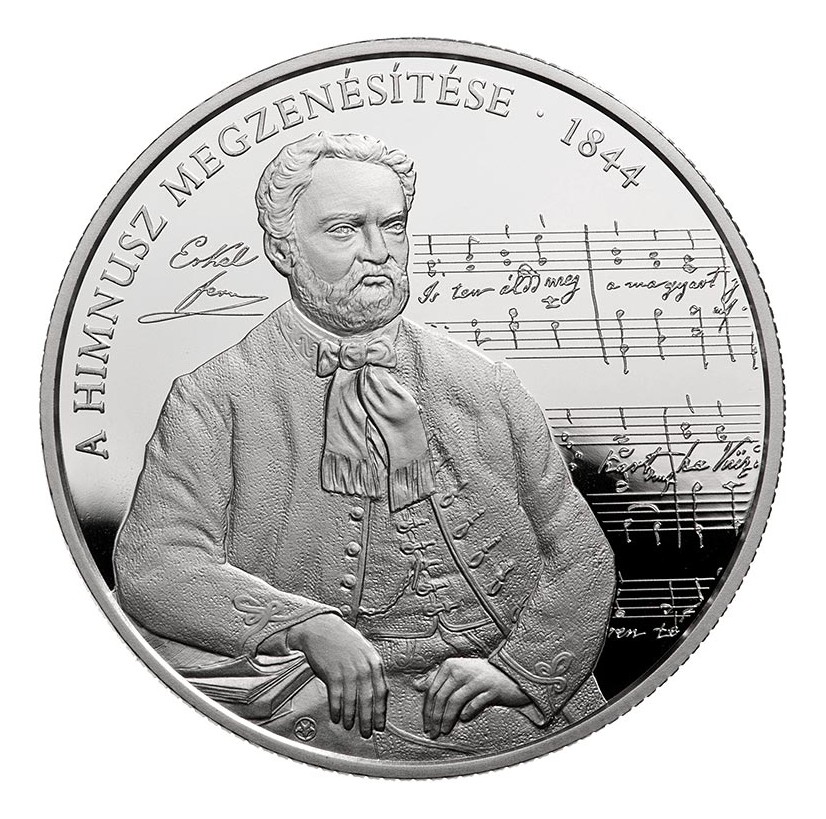 The reverse features and honours the composer of the melody and includes a depiction of Ferenc Erkel. The design is inspired by the portrait of Erkel by József Pataki and from a stone print by Ágoston Canzi. In the background and to the left is a facsimile of Erkel’s signature and on the right is a detail of the handwritten sheet music with the text of the Himnusz. On the edge and in a semicircle in the direction to the left, is the inscription A HIMNUSZ MEGZENÉSÍTÉSE · 1844 (“MUSIC OF THE ANTHEM · 1844”), which refers to the year the composition was penned. The insignia of Gábor Kereszthury is seen just under Ferenc Erkel’s portrait.

Each base metal and silver coin is encapsulated and accompanied by a certificate of authenticity, and a presentation case is available at an additional cost. For more information about these coins and others issued by the National Bank of Hungary, please visit the website of the Mint of Hungary.