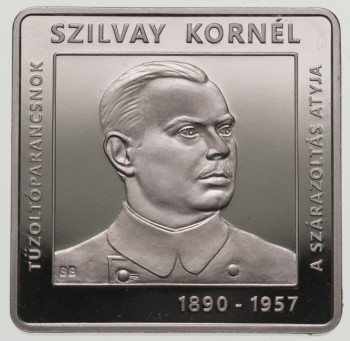 The National Bank of Hungary has issued its latest coin in the popular and informative “Hungarian Inventors and Their Inventions” series, which focuses on some of the country’s best known inventors. The 2015-dated coin highlights Kornél Szilvay, an important figure in the history of Hungarian firefighting and technology, on the 125th anniversary of his birth.

Born in Budapest, his keen interest in technology was influenced by his father and by Hungary’s burgeoning mechanical engineering industry in the mid to late 1800’s. After finishing school, he was awarded a degree as a technician from the engineering faculty of the Budapest Industrial College. He became deeply interested in firefighting after participating in a firefighting drill during his school-days. After completing his studies, he became the plant firefighter at the Schlick machinery factory where his father had worked and later joined the Budapest Volunteer Firefighters Association. His first successful innovation was solving the ignition problems with the motor of a Margirus pumper fire truck; from 1914 on he was a professional firefighter, first as a technical officer and later as senior officer. Recognizing the shortcomings of fixed hose firefighting, Szilvay focused specifically on modernizing firefighting equipment and developing sensible procedures. In 1923, he patented an invention: a fire extinguisher using an inert gas that caused less property damage than water. Two of these extinguishers were added to fire trucks and proved extremely effective in extinguishing small fires with little collateral damage.

The extinguisher produced exhaust gases from an internal combustion engine, cooling and pressurizing them with a compressor, and blowing the extinguishing powder (soda bicarbonate) onto the fire. The fire extinguishing powder had a smothering effect, forming a melted layer on the burning surface and preventing re-ignition of the flames as an oxygen-excluding, heat insulating crust.

In 1925, the production of the first dry fire extinguishers started at the MÁVAG Mozdony- és Gépgyár factory. The system was used successfully on its very first call after a fire broke out in the Gobelin hall of the National Casino and it was possible to repair all of the property affected. The equipment was officially added to the firefighting system in 1928. This Hungarian invention was a hit at the 1929 international firefighting exhibition in Paris, receiving wide acclaim in the press. Four “dry” firefighting units were created, and were responsible for the suppression of ninety-five fires in Budapest.

During his outstanding career, Szilvay helped to put out thousands of fires. For a time after World War II, he acted as the temporary head of the Budapest municipal fire brigade. On June 20, 1947, his expertise was instrumental in extinguishing a fire in the cupola of the Budapest cathedral with little water damage, allowing for a timely refurbishment.

He also held patents for other inventions, such as a valve closing in reaction to heat, a swimming pump, fire and explosion-proof cabinets, and the “alarmograph” fire alarm system. He held thirty-nine patents in all. As happened to many public figures in Hungary after the Second World War, Szilvay fell victim to the political machinations of the country’s communist government in the early 1950s.  Later reintegrated into public service, he eventually retired in 1957, and died shortly after his retirement on September 8, 1957. 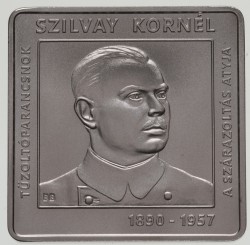 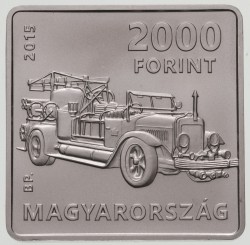 The square-shaped coin, produced by the Hungarian Mint in Budapest, is designed by Balázs Bitó and includes a portrait of Szilvay as a young man on the obverse. His name, the years of his birth & death, and the names of his most notable inventions are positioned around his portrait along the edges. On the reverse is a depiction of the dry extinguisher fitted to a fire truck, along with the year of issue and the denomination of the coin. “MAGYARORSZAG,” the word for Hungary in the national language, crosses the bottom.