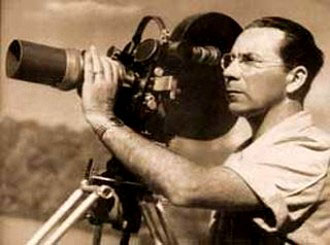 The National Bank of Hungary have issued two new coins which mark the centennial of birth of one of the country’s best known and celebrated cinematographers who excelled in the field of documentaries and in capturing wildlife and not only earned national – but international acclaim from the movie-making industry. István Homoki-Nagy (1914 – 1979) attained great notoriety was as a film director, cinematographer, ornithologist, writer and a lawyer but most especially as a pioneering figure in nature documentary who was also a Kossuth Prize winning artist.

Born in the town of Mezőtúr, a little town in the county of Jász-Nagykun-Szolnok, southeast of Budapest in 1914, He began his studies in the town of Kecskemét and later continued in Szeged. Not certain of what he wanted to do in his life, he completed his legal studies in 1937 after acquiring a doctorate in law. After being employed as a trainee, he was appointed as a court clerk and in 1942 acquired judicial qualifications. Homoki-Nagy’s passions were however in a completely different field of interest. Since childhood, he was deeply interested in nature and as an adult, he dedicated much of his free time to nature photography, while at the same time not neglecting his studies or his work. Between 1939 and 1943, numerous illustrated articles of his photographs were published, which unexpectedly lead to him being awarded the Ottó Hermann medal and certificate by the Hungarian Association of Ornithologists for excellence.

From 1945, he became the director of the Press and Photography Department of the National Museum of Natural Sciences. He was also a member of the International Federation of Photographic Art and the English Royal Academy of Film.

In 1949, Homoki-Nagy was commissioned by the Hungarian Newsreel and Documentary Factory and began to make short films such as In the Kis-Balaton’s Sea of Reeds, Birds of the Sandstone Cliffs and A Saker Falcon’s Story. Initially, his work in photography was intended to be a secondary career, but his photographic activities eclipsed his legal career and he resigned from the Law profession. He wrote, directed and shot his own films. His production work was carried out by a small, tightly knit group usually under humble conditions. Homoki-Nagy’s first full-length film was Kingdom on the Waters, which was released in 1951 and was acclaimed both in Hungary and abroad. In 1952, he won the award for “Best Cinematographer” at the Karlovy Vary Film Festival. In 1953, his film From Blossom Time to Autumn Frost, which depicted the beauty of nature in the Gemenc forest, won the Golden Lion Prize at the Venice Film Festival. Patient observation was a hallmark of his work. With incredible fortitude and endurance, he waited for the ideal moment to film the movements of flora and fauna. In his work, he always strove for perfection and was willing to do anything to get just the right shot. 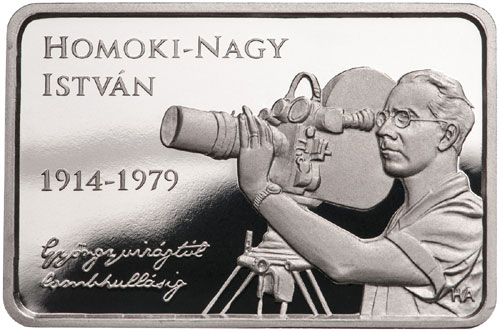 Towards the end of his varied career, Homoki-Nagy turned his hand to animal stories. Generations of Hungarians have grown up watching the adventures of Fickó (Hungarian vizsla – breed of dog), Pletyka (a dachshund) and Nimród (a falcon). His films Buddies – At the Reeds released in 1956 and the second part Across the Fields released in 1960 stand alone in their genre. 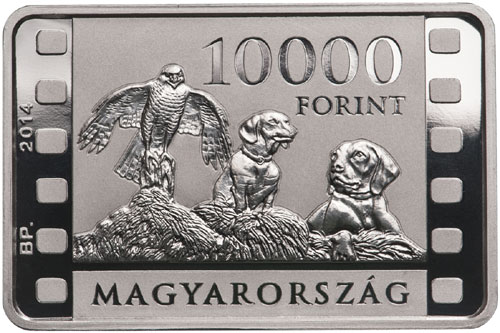 The rectangular-shaped coins, designed by Andrea Horváth are produced by the Mint of Hungary. The obverse depicts the bespectacled Director himself positioned to the right facing left and looking through the lens of a movie camera. A facsimile of the handwritten words “GYÖNGYVIRÁGTÓL LOMBHULLÁSIG” (From Blossom Time to Autumn Frost) is placed to the left of the primary design and the years “1914 -1979” are above the handwritten words. The reverse includes images of the three animal characters, Fickó, Pletyka and Nimród along with the denomination and year of issue framed by the recreation of 35 mm. film edges.

The two coins share the same design with the smaller value being produced in a base metal and in a BU quality. For more information on these and other coins issued by the National Bank of Hngary, please visit the website of the Mint of Hungary at: http://penzvero.hu/termekek/ezust_ermek/homoki-nagy-silver-proof.html Information offered in Hungarian and English – international orders dispatched.