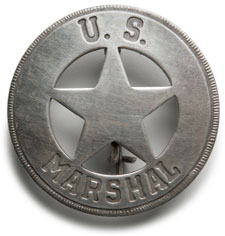 On December 15, 2011, the House of Representatives passed H.R. 886 by roll call vote. The bill calls for gold, silver, and clad coins to be produced in commemoration of the 225th anniversary of the establishment of the United States Marshals Service.

The bill had been introduced on March 2, 2011 by Rep. Steven Womack of Arkansas. A similar bill S. 431 was introduced in the Senate by Sen. Mark Pryor of Arkansas.

If approved, the Secretary of the Treasury would be required to mint and issue up to 100,000 $5 gold coins, 500,000 silver dollars, and 750,000 half dollars. The coins may be issued to the public beginning on or after January 1, 2015, with a provision to allow a limited number to be issued earlier to the Director of the US Marshals Service and employees of the Service for display and presentation during the anniversary celebration. No coins may be minted after December 31, 2015.

The sales price of each coin will include a surcharge of $35 per gold coins, $10 per silver dollar, and $3 per half dollar. The first $5 million of the surcharges will be distributed to the US Marshals Museum for the preservation, maintenance, and display of artifacts and documents. Additional amounts would be distributed in thirds to the National Center for Missing & Exploited Children, the Federal Law Enforcement Officers Association Foundation, and the National Law Enforcement Officers Memorial Fund.

In order to become law, the bill must be passed in the Senate and then signed by the President.