The Trésorerie Générale des Finances de Monaco have issued a new silver collector’s coin which marks the 400th anniversary of the title of “Sovereign Prince of Monaco” first being used by the then Lord of Monaco. The coin was officially issued on 1st December, one day before the Monaco Numismatique show.

Honore II (born 1597) who reigned first as Lord of Monaco from 1604 – then as sovereign Prince from 1612 until his death in 1662, was the first bearer of this new title. For more than four centuries, members of the House of Grmialdi ruled the small Mediterranean enclave in the capacity of different titles and prerogatives, but most were recognized officially as “Lord of Monaco” since the reign of Charles I (r. 1331 – 1357). With the recognition of the independence of Monaco by King Louis XII in 1512, Monaco’s influence and importance was increased with struggles for the control of the small coastal territory being fought over by Spain, France and Sardinia at different times. It was not for another 100 years after France’s recognition of its independence that the ruling Lord of Monaco decided to style himself using the title of “Sovereign Prince” in order to emphasize Monaco’s status as an independent entity. Coins bearing this inscription were first struck in the Royal Palace in 1640 – indeed Monaco’s first ever national coinage, where the title of the Prinicpality’s ruler first appeared on currency. 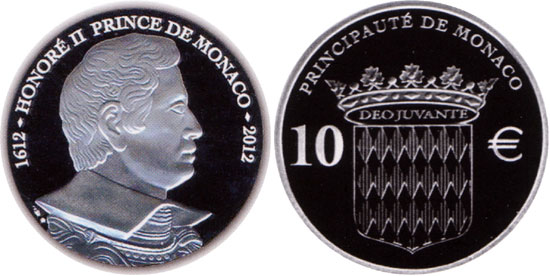 The coin, which is struck by the Monnaie de Paris, depicts Prince Honore II facing to the right as he was portrayed on a larger silver medal struck in 1624. The text “1612 – HORORE II PRINCE DE MONACO – 2012” is placed above the principal portrait. The reverse of the coin includes a rendition of the royal coat of arms consisting of the diamond-shaped red & white field along with a coronet above the shield. The motto “DEO JUVANTE” (With God’s help) is also included within the band of the coronet. The denomination of “10 €” is included on either side of the crest and the text “PRINCIPAUTE DE MONACO” is placed above the coronet.

Struck to proof quality and in .900 fine silver, the coin weighs 25 grams with a diameter of 37 mm. A total of 6,500 pieces has been authorized. The coin can be purchased through the Musee des Timbres et des Monnaie in Monte Carlo only in person while stocks last, the Museum are unable to dispatch coins to any destination.

For information on the ordering of this coin, please contact Editions Victor Gadoury at: http://www.gadoury.com/fra/