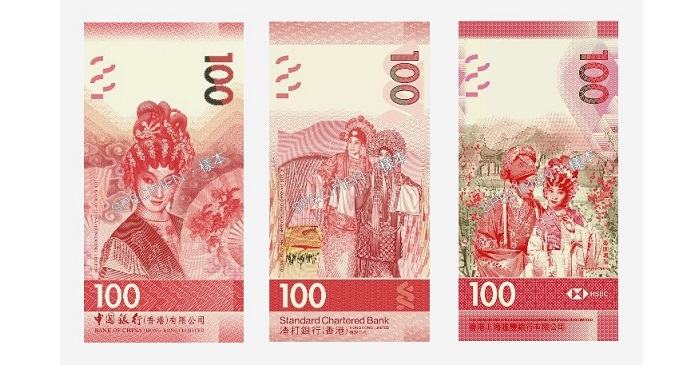 The Hong Kong Monetary Authority has announced (3rd September) that new HK $100 banknotes (U.S. $12.75) will now be available through the three commercial Hong Kong Banks authorised to issue currency notes. A new series of banknotes was initiated last year with the issue of new HK $500 and $1,000 denominations, the notes incorporate new designs, themes, and security features.

The three commercial Banks: The Hong Kong and Shanghai Banking Corporation Limited, Standard Chartered Bank (Hong Kong) Limited, and Bank of China (Hong Kong) Limited, have all submitted individual designs which are part of the new theme of “traditional Chinese and Hong Kong culture.” The focus for the $100 denomination is “the beauty of Cantonese opera,” and on the three banknotes, the performers, their costumes, and the artistic conception have been featured. 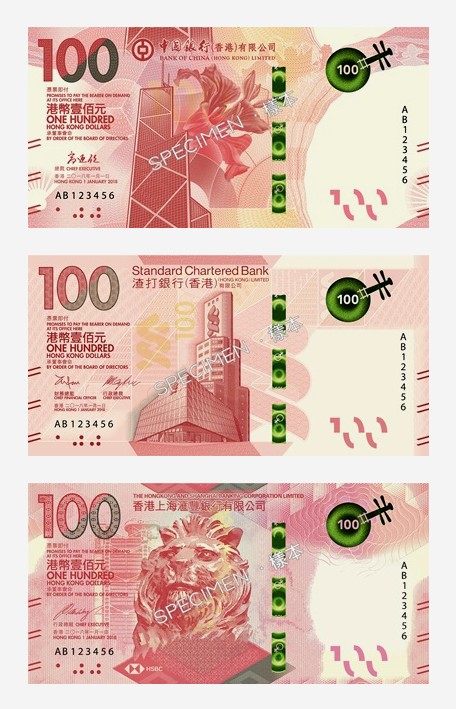 The new banknotes have been colloquially nicknamed ”golden threadfin bream” (Nemipterus virgatus) by Hong Kongers because of their colour and design, which resemble the scales of the local fish. The denominations are issued by all three banks which include identical security features, dimensions, and colours to distinguish them from other denominations in circulation. The designs are each different and all incorporate a vertically depicted motif on the back of the notes and a horizontal design on the face.

The new $100 notes measure 153 by 76.5 millimetres and have six key security features, including:

Shimmering pattern — On the face, when the note is tilted, a shimmering ring contained in the outline of a zhuihu, a two-stringed bowed Chinese instrument, moves correspondingly. This shape is located in the upper-right half.

Vertical windowed holographic thread — When the note is tilted, large and small rings on the metallic thread move correspondingly.

Enhanced watermark — The theme of the bauhinia flower is used so that the flower, leaves, bud, and denomination numeral can be seen when the note is held up to the light.

Hidden latent print — On the obverse, when the note is tilted under the light, the denomination numeral hidden in the background can be seen.

The remaining two denominations of HK $50 featuring Hong Kong butterflies and the HK $20, which will highlight the familiar cuisine of dim sum and tea culture, are scheduled for release in 2020. For additional information about currently circulating banknotes and coins in Hong Kong, please visit the website of the Hong Kong Monetary Authority.