The People’s Bank of China have issued (29th June) a third series of coins which pays tribute to the famous Chinese Opera characters who have appeared in well-known and loved stories throughout the many centuries. Known collectively as the Peking Opera, which is the theatrical form of Chinese opera, its history encompasses five thousand years of traditional culture, known as the “quintessence”.

The Peking Opera, with only two hundred years of history, compared with other forms of Chinese drama, saw a rapid development throughout the land during the Qing dynasty and became widely loved by the masses. The Peking Opera, with a repertoire of over 1,400 works, are based on Chinese history, folklore, and, increasingly, contemporary life. The tradition or performance includes the wearing a mask which is specially painted based on spectral patterns of facial makeup in Peking Opera characters. During the Cultural Revolution, the Peking Opera was denounced as ‘feudalistic’ and replaced with the “eight revolutionary model operas” as a means of propaganda and indoctrination. After the Cultural Revolution, this process was largely undone and the Peking Opera (now commonly known as Beijing Opera) has enjoyed a resurgence of interest and new-found popularity with many younger Chinese.

The coins, struck by the Shenzhen Guobao Mint, total five in all and include two gold and three silver coins. The obverse designs pay particular attention to the masks so diligently featured in the many stories and productions and depicted in full color. The common reverse design of the gold and silver commemorative coins includes the national emblem of the People’s Republic of China with stylized waves under the emblem, representing the seas. A pattern of clouds is placed on either side of the emblem and the year of issue ”2012” is placed along the lower edge. Text including the country of issue is placed along the top edge.

For more information on these and other coins issued by the Bank of the People’s Republic of China, please visit the website of the China Gold Coin Incorporation at: http://www.chngc.net/EnVersion/Index.aspx 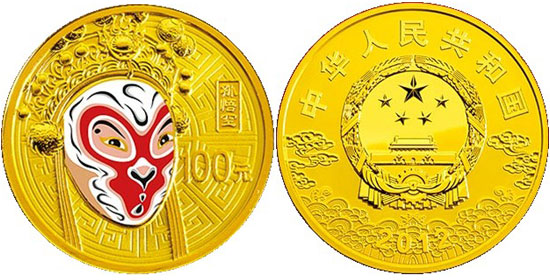 100 Yuan – Obverse: The image of the well-known “Monkey King” character, born from a stone who acquires supernatural powers through Taoist practices. The traditional Chinese text reads “Monkey King” along with the denomination. 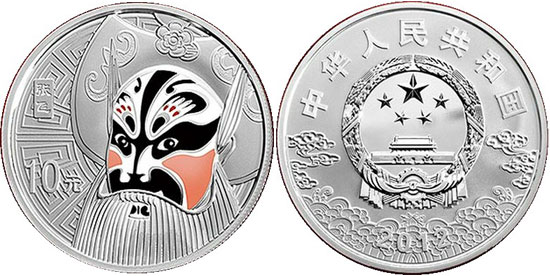 10 Yuan silver – Obverse: An image of the character “Zhang” mask from the Beijing Opera, with the traditional Chinese text “Zhang Fei” with denomination. 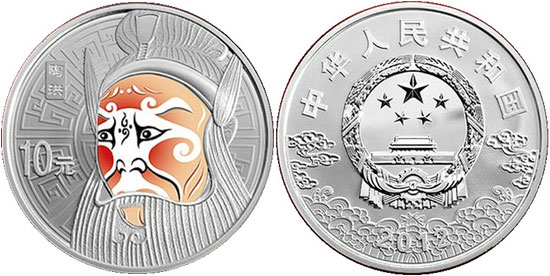 10 Yuan silver – Obverse: A mask representing the sophisticated character personifying martial arts, the industrious and kind-hearted, humorous “Taohong” of the Beijing Opera. The text “Tao Hong” in Chinese characters with denomination is placed to the left.