The Isle of Man Treasury have recently launched a collector coin which marks the Diamond Jubilee River Pageant, part of the national and official celebrations to take place from June 2 to 5.

The crown is the only officially issued gold-layered coin to mark this extraordinary event in modern British history.  The £12 million event will feature a seven-mile long procession that will include Dunkirk little ships, historic vessels, steam boats and tugs, Dutch barges and passenger ships. The Golden Jubilee River Pageant will be the focus of the 2012 Jubilee celebrations, marking the Queen’s 60-year reign which features the 1,000-strong flotilla on the River Thames including “Gloriana”, a hand-built 88 foot rowbarge covered in gold leaf. More than a million people are expected to line the route to witness the spectacle – a tribute to Britain’s maritime history – with the Queen’s royal barge as the centerpiece. 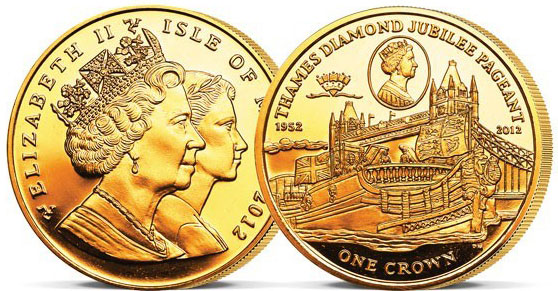 The coin’s reverse features a depiction of the Golden barge with the towers of the London Bridge in the background. A cameo profile of the Queen is placed above the barge and the text “THAMES GOLDEN JUBILEE PAGEANT” surrounds the top half of the primary design. The years “1952” and “2012” are seen on either side of the text with the coin’s denomination of “ONE CROWN” under the design. The conjoined portraits of the Queen as she was depicted on earlier coinage and as she is portrayed on contemporary coinage is included on the obverse along with the text “ELIZABETH II ISLE OF MAN 2012” is seen along the edge.

Struck by the Pobjoy Mint in the United Kingdom to proof quality, the coin is produced in cupro-nickel with a 24ct. gold layered finish, a diameter of 38.6 mm, and a mintage of 3,612 pieces. The pageant will take place on Sunday June 3 and travel under 14 road and rail bridges, feature more than 20,000 people on the river and take 90 minutes to pass any given point.

The coin is distributed exclusively by the London Mint Office, for ordering information, please visit their website at: http://www.londonmintoffice.org/royal-commemoratives/thames-diamond-jubilee-pageant-coin/?open=29&cat_id=29