The Real Casa de la Moneda have announced that the complete set of the 8th Ibero-American Series “A Meeting of Two Worlds” has been comprised into a complete nine coin silver set including one silver commemorative medal featuring the coats-of-arms of the nine countries participating in this issue. The assembled series went on sale as a full set on September 5th.  The participating countries in this series are Argentina, Cuba, Spain, Guatemala, Mexico, Nicaragua, Paraguay, Peru and Portugal.

The coins in the 8th series are all dated “2010” and are produced either by their respective Mints or by designated Mints. The common subject matter for this issue is “Historic Ibero-American Coins” and the exceptional aspect of this series is that each country’s design replicates either an actual coin which was at one time in circulation or selected motifs of previous coinage of the country, as in the case of Portugal’s design. The commemorative medal included is also struck by the Real Casa de la Moneda.

Each country has incorporated on the obverse of its own coin the inclusion of the coat of arms / crests of the other participating countries. The Real Casa de la Moneda have assembled a maximum of 12,000 sets. As with the seven preceding series, all nine coins included have the same specifications as the traditional Spanish piece-of-eight and are all minted in proof quality. Each coin and the commemorative medal are struck in .925 silver with a weight of 27 grams and a diameter of 40 mm. The coins and medal are housed in a custom display case together with numbered certificate of authenticity. 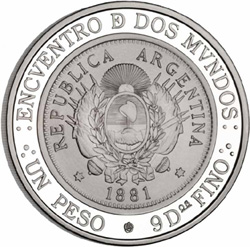 Argentina’s design: A replica of the obverse of the country’s first 1-Peso coin minted in silver after 1881. This coin was popularly known as the “patacon”, the colloquial term used to designate colonial Spanish-American coins of similar characteristics. 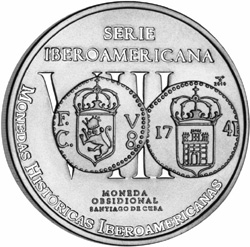 Cuba’ design: A replica of a coin minted during the siege by the British of the city of Santiago de Cuba from July 29 to December 19, 1741. The coin’s issue was authorised by the City Council and the city’s Governor. 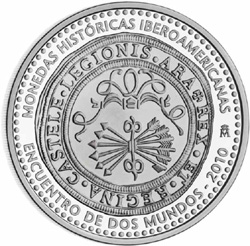 Spain’s design: Replicates the reverse of an 8-reales coin that was struck in Seville under the Catholic Monarchs Isabella I and Ferdinand V of Castile. The mint mark, assayer’s mark and face value were stamped on the obverse. The symbols of the yoke and the arrows also appear on all the coins from the 1 to 8 reales which were struck by all of the mints under these monarchs. 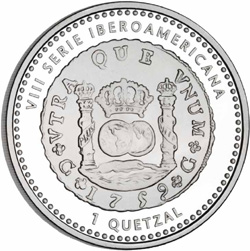 Guatemala’s design: A reproduction of the first orbicular or circular coin that was minted in Guatemala after 1754. It is a silver coin of the “pillar” design type. The inclusion of the letter “G” identifies the Guatemalan mint. This design was utilized by different American mints during the same period of time. 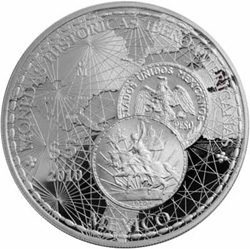 Mexico’s design: The obverse and the reverse of the iconic 1- Peso coins commonly called pesos del caballito (horseman) and struck in 1910. The obverse displays the country’s coat-of-arms charged with a spirited Mexican eagle, facing front with wings outspread. The reverse depicts an equestrian figure of Liberty. 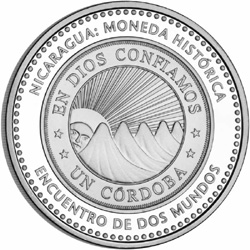 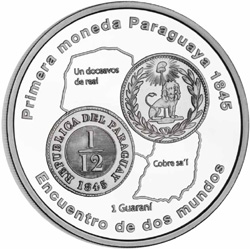 Paraguay’s design: Utilises the design of a coin known by the name of “Cobrecito de leon” which were minted in the city of Birmingham (England). They were released into circulation by a decree dated March 1847 and they circulated until 1877. Within the currency system in use during this period, twelve copper coins represented one real and eight reales were equal to one peso. 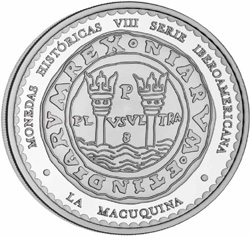 Perú’s design: A reproduction of the reverse from the first coin struck at the Mint of Lima in 1568. These coins featured the two Pillars of Hercules surmounted by crowns, standing on ocean waves, with the legend “PLUS ULTRA” that had been the imperial motto of Carlos V in reference to the scope of Spain’s power & reach overseas. Also shown is a letter “P” indicating Peru as the colony it was minted in. 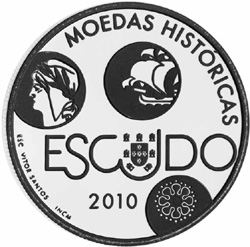 Portugal’s design: Dedicated to the Escudo, the currency that replaced the Reis coinage by the Decree of the 22nd May 1911 after the establishment of the Republic in 1910. The design, in deference to the fact that the escudo still very much abides in the sentiment of the Portuguese public, displays as part of the overall design, aspects of previous Escudo coin issues from its introduction to the replacement by the EURO currency in 2002.

For more information on this and other coins issued by the Royal Spanish Mint, please visit their website at: www.fnmt.es