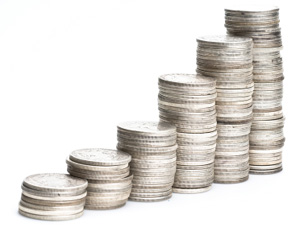 Last week, silver fell all the way from about $49.50 to a low of $33.05, a drop of about one-third. While the extent of the drop was a mild surprise, it was within the range of what I thought could occur.

As silver was falling last week, there was more coverage of the silver market that I have seen in years. Much of the reporting and commentary was negative. Invariably, it left out significant information and some was downright deceitful. Only a handful of articles other than my own reminded people that nothing had occurred to correct the fundamental troubles of the US government, the US economy, and the US dollar, meaning that the long-term reasons to own physical gold and silver still applied.

Yesterday, the COMEX silver price closed at $38.48, an increase of more than 16% in five days. The price of gold was also up about 3% during the same time.

Now that silver is quickly recovering, it is not a surprise to me that the mainstream media news coverage has almost completely stopped. The lack of reporting doesn’t surprise me as it is consistent with the patterns I’ve observed over the past two decades.

The current recovery is sparked in part by a surge in demand for physical silver. Over the past week, demand for silver at my companies has resumed the pace we saw in prior months. On the other side, there has comparatively little retail liquidation of silver. Even I got into the act, personally making one of the largest purchases of silver for my own account.

Even though I am now in a substantial profit position on the silver I bought last week, it was never my intention to do short-term trading. I simply perceived what I considered a bargain buying opportunity and shifted some assets around.

Last week’s drop in the price of silver resulted in liquidation by a number of leveraged and other “weak hands” owners of silver. A significant percentage of these positions were purchased by short sellers who were closing out their exposure to future losses. Now that the remaining physical silver inventories are held by more unleveraged long-term owners, there are fewer prospects for any future significant decline in the price of silver.

Notice I am not saying that the price of future silver will now only rise. Even in a long-term bull market, which I believe that silver is now in the middle of experiencing, there will be occasional bouts of profit-taking. Even more, expect another major effort to suppress the price of silver when it again climbs near $50.

Like a lot of other buyers in the past week, I don’t expect to consider selling my latest purchases of silver at prices less than $100 per ounce. I don’t really care how long this will take.

When evaluated on that basis, in my judgment the price of silver right now is still a bargain. And, as I pointed out, I’m not just saying that, but have put my money where my mouth is. I look forward to saying, “Hi-Yo Silver, Away!”