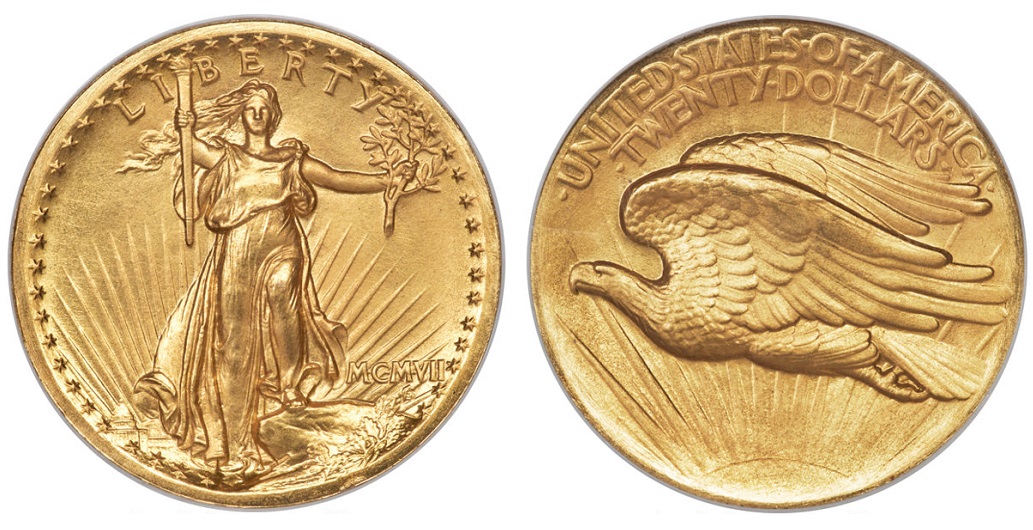 Mr. Dines, who rose to forecasting fame in the 1950s and ‘60s, has spent more than six decades — “and I don’t know how many thousands of hours,” he says — building a collection that reflects not only his steadfast faith in the enduring strength of gold, but his unceasing curiosity. Mr. Dines sought out coins not just for their value, but for their beauty and the stories they told about those who made them and those who protected them.

“Nobody owns a gold coin,” Mr. Dines says. “They cannot be owned. We are temporary custodians.”

The September 17-21 U.S. Coins Signature Auction will contain the majority of Mr. Dines’ offerings, including high-quality examples of pre-1810 coinage. Given the exceedingly small quantities of coins that were produced during this nation’s nascent days, and how heavily they were circulated, high-grade survivors are uncommon. Yet they abound in Mr. Dines’ collection.

“Every coin in my collection was something that I thought was beautiful and loved,” Mr. Dines says. “That was the single most important thing I looked for. I didn’t look for which particular mint it came from.”

“The name James Dines has long been synonymous with precious metals and careful research, so it should be no surprise to his readers and the numismatic world that Mr. Dines would put together a wonderful coin collection with attention to detail and an eye for quality,” says Sarah Miller, Deputy Managing Director and Senior Numismatist in Heritage Auctions’ New York office.

One of the standouts in Mr. Dines’ collection is the 1907 High Relief, Wire Rim Saint-Gaudens double eagle, PR-69, which would be the zenith of any assemblage. Indeed, this is a veritable Holy Grail for many collectors given its beauty and a mythic backstory that strongly suggests this coin came from the collection of Charles Barber, the sixth chief engraver of the United States Mint.

Jeff Garrett writes that this is “one of the most popular coins ever struck by the United States Mint,” in large part because the 1907 Saint-Gaudens double eagle is “sculptural in appearance and… considered by many to be the most beautiful regular issue gold coin ever produced.”

For this, of course, we must credit its designer: Sculptor Augustus Saint-Gaudens, who based this design on the Winged Nike sculpture featured on his 1903 General William Tecumseh Sherman Memorial located in Manhattan’s Grand Army. Few coins can boast such an artistic ancestry.

Fewer still are the 1907 Saint-Gaudens double eagle in such magnificent condition: This virtually perfect PR-69 High Relief double eagle, which last appeared at auction in 2013 as part of the famous Tacasyl Collection, is tied with one other example for finest honors.

“To me, the Saint-Gaudens is a masterpiece,” Mr. Dines says. “He was a genius, and it was his last coin. He really left us a great legacy. And God bless the people who protected those coins.”

“This coin has survived in such amazing condition that NGC has called it a Proof or special striking, and has been virtually untouched despite being minted more than 100 years ago,” Miller says. “This would be a true trophy coin for the Saint-Gaudens $20 gold piece collector, gold enthusiast, or those who must have the best and most artistic pieces for their high-end collection. This is the sort of coin that is so attractive and impressive in hand that it would stand out even to non-collectors.”

Two highlights from Mr. Dines’ collection aren’t gold at all, but Uncirculated Bust dollars — one from 1798, the other dated 1800. These were the second U.S. silver dollar types produced, following the short-lived Flowing Hair dollar, and feature on their obverse a bust of Liberty often said to be modeled after Philadelphia socialite Ann Willing Bingham.

What makes Mr. Dines’ offering so exceptional is the fact that most other coins of this type are found in well-worn condition; after all, these were highly circulated in commerce. Mr. Dines’ Bust dollars, however, are among the highest graded: The 1798 Draped Bust, Large Eagle dollar is MS-64; the 1800, MS-63.

Proof coinage is another area where Mr. Dines’ collection shines, including both Proof type and Proof gold coinage. These special pieces were minted for collectors, but given the small quantities produced — not to mention the melting and mishandling that occurred over time — few Proof gold coins have survived to the modern day.

Owning just one Proof gold coin would be an accomplishment for most collectors, but Mr. Dines sought out several wonderful examples to highlight the best of the U.S. Mint’s technology at the time. One such coin is the 1903 Liberty double eagle, PR-65, a rare Cameo specimen that is among a small handful to bear finest certified honors.

“Ranging from gorgeous Proof coins to World and Ancient gold pieces to the cache of Saint-Gaudens $20 gold pieces, there is something for every numismatist in this exciting offering, all with Mr. Dines’ provenance,” says Greg Rohan, president of Heritage Auctions. “This collection also comes at exactly the right time, with gold prices on the move and strong demand for both numismatic coins and precious metals.”