The 43rd New York International Numismatic Convention was held at the Waldorf-Astoria this past week. In conjunction with this show there were a number of different auctions held by various companies, including Heritage and Stack’s-Bowers. In this auction recap we will take a look at a few prices realized at these auctions. Please note that all prices realized include a buyer’s premium, which is 17.5% at both Heritage Auctions and Stack’s-Bowers.

The highest price realized at Platinum Night, held by Heritage on January 5th was for Lot 31301, the unique South-African 1897 Six Pence struck in gold. Offered for the first time at public auction, this prime rarity in South-African numismatics realized $329,000, right in the ballpark of the presale estimate of $250,000-$350,000 that was mentioned in the catalog. The coin offered came from the Royle Baldwin collection, in which it had been for the past 75 years or so. A companion piece, offered as Lot 31302 was the same coin (which is usually struck in silver) struck on a copper planchet. Unlike the gold example, however, the copper coin failed to sell.

While some other coins also failed to sell there were also some coins that did very well. Lot 31166 was among the finest known examples of the very rare 1839 Proof gold “Una and Lion” 5 Pounds, one of just 400 coins struck, graded PR64DCAM by PCGS. The coin had a presale estimate of $150,000-$175,000, but spirited bidding took it all the way to $258,500, selling to a floor bidder. The coins are large, and virtually all examples that are known are excessively hairlined, making this even at the PR64 level a very rare coin, and none have been certified in higher numerical grades.

In our preview of this auction we mentioned the Santa Catarina Collection of Brazilian Gold Coins, an extensive and specialized collection of 18th century Brazilian Gold Coins. The rarest coin of this collection, and also the highest price realized was Lot 31019, which sold for $146,875, just shy of the presale estimate of $150,000-$200,000. The coin, which is the finest known of just two 1732-B 6400 Reis struck under Joao V known to exist, had been graded MS61 by NGC. One of the major rarities in Brazilian numismatics, the coin is one of the most difficult Brazilian type coins to acquire, with just these two coins known of this particular type.

One more coin of the Heritage auction we would like to mention is Lot 31051, a very rare 1907 (dated year 33) Dollar struck by the Manchurian Provinces in China. The coin, graded MS62 by PCGS, came with a catalog presale estimate of $25,000-$30,000. The bidding took it away, and the coin realized $114,562.50, selling to an anonymous internet bidder. This price realized is an example that Chinese numismatics still performs well, especially for the rare, high grade coins that are seldom offered for sale, such as that coin.

The Stack’s-Bowers auction was held two nights later in the week, on January 9 and 10, and bidding continued until after midnight at both nights. In our preview we took a look at two specialized collections, the John W. Adams Collection of Spanish Colonial Proclamation Medals and the Stanley Aberdeen Collection of Swedish Plates. Both collections saw spirited bidding and prices closed or well over their presale estimates, especially for the Swedish Plates, a rather obscure part of (Swedish) numismatics which the auction proved are in much demand, with bidding from people from around the world. 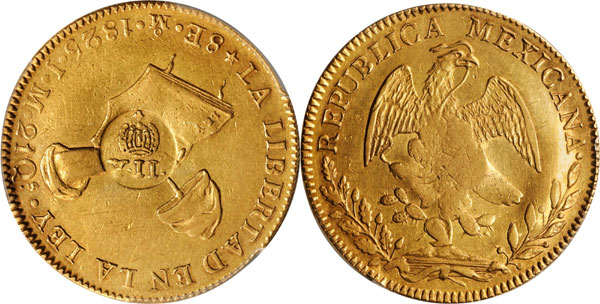 Some other coins also sold well, although, just like the Heritage sale, there were also some lots that failed to sell. One collection which performed very well was the Ray Czahor Collection of Philippine Countermarks. The highlight of this collection was perhaps Lot 1428, a very rare countermarked 1825-Mo JM “Hand on book” 8 Escudos, a very rare denomination to find counterstamped with a Philippine Counterstamp (counterstamped by decree of February 1, 1836). The host coin is very rare on its own as well, and this particular coin (graded PCGS EF45) realized triple the presale estimate of $15,000-$20,000, selling to the high bidder at $58,750. 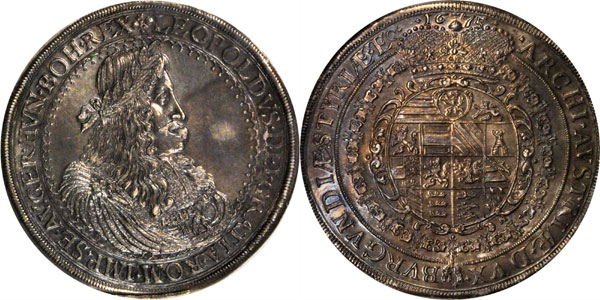 Another coin that shattered its presale estimate of $2,000-$3,000 was Lot 319. The coin, an NGC MS65 graded example of a 1675-IAN Austrian 2 Taler struck at the Graz Mint, saw spirited bidding between two competing bidders, realizing $8,225. The coin, which was encased in an oversized NGC holder due to its large size, is very rare to find in high grade such as the coin, thanks in part due to the large and heavy size, making imperfections quite easy to find. This coin lacked large marks, however, and together with nice envelope toning made for an appealing coin.

Overall the auction results were mixed, as can be seen from some of the results listed above. Some high-end coins failed to sell, which might be the result of various factors. Perhaps some areas of world coins are due for a price correction, or perhaps some reserves were set too high. This happens, and on the other hand there were some coins that performed very well, realizing record prices and seeing spirited bidding. Overall we can draw the conclusion that rare items should continue to perform well this year, with some of the lower-end items perhaps due for a price correction.