President Herbert Hoover was our 31st President. He headed up the humitarian efforts in war-time Belgium, and headed the U.S Food Administration during World War I, as well as being the Secretary of Commerce during the presidencies of Warren Harding and Calvin Coolidge. He is one of only two Presidents to have been elected without electoral experience or a high military rank. As an engineer, he believed that improvements in goverment efficiency and large-scale government programs could be used to stimulate the economy out of the Great Depression; they did not, but did serve as a basis for the New Deal policies put into place by his successor, President Franklin D. Roosevelt. 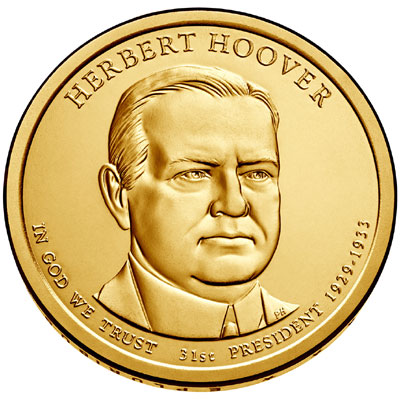 The coin bearing President Hoover’s image is the thirty-first in the series of Presidential Dollar coins, and the third to be issued in 2014. The obverse depicts Hoover, the time in office (1929-1933), and the motto “In God We Trust”. The reverse shows the Statue of Liberty in the same design as been depicted on all Presidential dollars. The edge has the motto “E PLURIBUS UNUM”, the year of issuance, and the mint mark.

The Herbert Hoover Presidential Dollar will be released on June 19th, 2014 at 12:00 noon EDT. As Presidential Dollar coins are still being produced under the Treasury Department’s suspension of production of the dollar coin for general circulation, they will only be available directly from the U.S. Mint in the following products:

A coin launch ceremony will be held in the Figge Auditorium at The Hoover Presidential Library in West Branch, IA on June 19th at 11:00 CDT. Featured speakers will be Leslie Hoover-Lauble, the great-grand daughter of President Herbert Hoover and Michael A. Olson of Pella, Iowa, a member of the Citizen’s Coinage Advisory Committee that was involved in the design selection of the coin. An official from the U.S. Mint is expected as well. A coin pour, a traditional activity, will be conducted, and rolls of dollars and 2014 proof sets will be available for purchase.