The Royal British Mint has released coins to honor the 500th anniversary of Henry VIII’s ascension to the throne. The coins will be available in gold, silver, platinum, and cupro-nickel. This will be the first time Henry VIII has appeared on a UK coin in nearly 500 years. 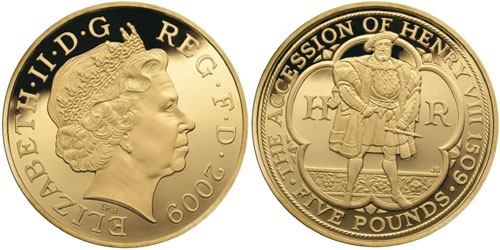 Love him or hate him, Henry VIII is undoubtedly one of history’s most influential monarchs. His reign changed the face of England forever and we felt it was essential that this remarkable period of history was commemorated with a lasting and treasured momento. We hope the public recognizes the significance of this anniversary and chooses to honor it with a coin that does justice to a larger-than-life monarch.

The gold coin will be struck in 22 karat with a proof quality finish. The mintage will be limited to just 1,509, representing the year 1509 when Henry was crowned. The coins are presented in a walnut veneer display case and come with a numbered certificate of authenticity. The coins are currently on sale at the Royal Mint priced at £1,195.00.

The Royal Mint’s coin shows the great king standing before a frieze of roses in the ‘antique’ style much favored in the carvings and tapestries of the period. The edge of the coin features a Latin inscription ROSA SINE SPINA, which was also used on Henry VIII’s own coinage and translates as ‘Rose without a Thorn’. Additional details include the initials HR (Henry Rex) which represents his personal monogram and a rope border surrounding the coin’s design which symbolizes the Royal Navy.