One of the most popular and scarcest early commemorative half dollars, the 1928 Hawaiian Sesquicentennial Half Dollar was a classic the moment it was struck. It was one of the few classic commemoratives whose entire (low) mintage was sold out; it features a historic theme directly related to the European discovery of one of America’s most well-known states (a territory at the time) and high grade examples are scarce. With a mintage of approximately 10,000 circulation strikes and an extremely limited number of sandblasted Proofs (50 were supposedly struck but a much smaller number is presently known) this is also considered to be the classic key-date within a 50 piece early commemorative type set and a coin that is worthy of being discussed in greater detail.

The 1928 Hawaiian Sesquicentennial Half Dollar was struck to commemorate the 150th anniversary of Captain James Cook’s landing on the Hawaiian Islands on January 18, 1778. The history of Hawaii, of course, commenced much earlier than that, with the first Polynesians arriving from islands further south somewhere around the year 300. While the visit of James Cook (who was in search of the infamous and at the time nonexistent Northwest Passage) was the first recorded visit by a European to the islands, it is believed that there might have been previous visits from other Europeans as well as Chinese explorers during voyages in the area. Any evidence that might have survived that would confirm those visits, however, appears to have been lost.

With Captain James Cook being the man that brought knowledge of the Hawaiian Islands to the outside world it should not come as a surprise that the Captain Cook Sesquicentennial Commission, responsible for the idea of having a commemorative coin issued for the occasion recommended a bust of the Captain on the obverse. For native Hawaiians, however, this might not have been such a logical choice. The arrival of Captain Cook as well as other Europeans during later times ended a period of Hawaiian history that had lasted for over 1500 years. It meant the end of traditional ways of life, as well as the independence of Hawaii, although a kingdom did exist (and later an independent republic) until the end of the 19th century. For these reasons Captain James Cook is not as well-regarded by native Hawaiians as some might believe, even almost 250 years after his first visit. 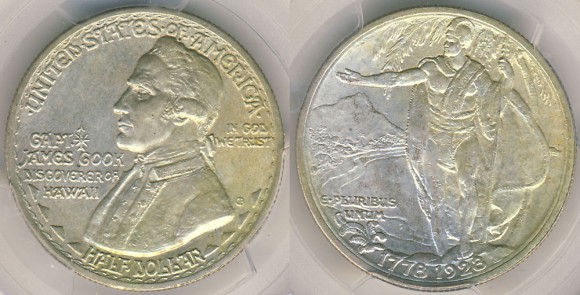 To go back to the commemorative coins, designs were submitted by Hawaiian resident and artist Juliette May Fraser, based on recommendations of the sesquicentennial commission. Sketches were sent to Chester Beach, who prepared models for the dies that would be put into production. The obverse featured a half-bust of Captain James Cook facing left. The obverse has a somewhat crowded appearance, with “CAPT/JAMES COOK/DISCOVER OF HAWAII” in three lines in front of the bust, UNITED STATES OF AMERICA on top and HALF DOLLAR near the bottom. IN GOD WE TRUST is in small print placed directly behind the bust. Near the bottom rim are eight triangles (“mountains”) representing the eight largest Hawaiian islands.

The reverse features one of the most elaborate and realistic scenes ever seen on American coinage. It’s features a native Hawaiian Man, dressed in traditional clothing, pointing towards a background of the beach and a mountain somewhere in Hawaii. A palm tree is seen directly behind him, and the whole scene is very realistic and appealing when viewed in hand. Near the bottom border is the motto E PLURIBUS UNUM as well as the dual dates 1778-1928, representing the date of discovery of the Hawaiian Islands as well as the sesquicentennial anniversary date.

The 1928 Hawaiian Sesquicentennial had a total mintage of 10,008 coins (all struck at the Philadelphia Mint during June 1928), a number which included eight coins set aside for assay purposes (and presumably melted) and 50 sandblasted Proofs. The regular issue coins were available through the Bank of Hawaii starting October 1928, resulting in a quick sellout. The coins were sold at a rather heavy premium, even for a silver commemorative issue, but the $2 issue price did not seem to result in a lack of demand. Soon after the coins went on sale there already were premiums on the freshly issued coins, and both premiums and demand have stayed strong ever since.

The Proofs are a different story. After 1915 the Mint had ceased regular production of Proof coinage for collectors, a decade long tradition that would not be resumed until the 1936. As a result not only do we have very few or no Proofs of coins such as the Peace Dollar and the Standing Liberty Quarter, this also means that there was no reason to create any Proof striking of commemorative coinage (and needless to say, since most were not meant to be spent anyway, there never appeared to have been much interest by the Mint to strike Proof commemorative coinage in the classic period.

Why then, one might ask, do we have a total mintage of 50 sandblasted Proofs produced for the 1928 Hawaiian Half Dollar? There seems to be no particular rhyme or reason why exactly this issue holds the honor, but we do know that 50 government officials and dignitaries each received a carefully produced, double struck and individually sandblasted Proof. The original list of recipients is still in existence, but the majority of Proofs in the marketplace has had their original pedigree lost, making any coin that can be traced back to the original owner a true rarity (with a Proof 1928 Hawaiian Commemorative a true rarity on its own).

Whether a Proof or an business strike example, a 1928 Hawaiian Sesquicentennial Commemorative Half Dollar is a scarce coin that is often one of the highlights in a classic commemorative collection. Most uncirculated examples that have survived do so in the lower mint state grades, with gem survivors being very scarce and anything finer than that extremely rare. Attractive toning can be difficult to find on this issue (but not as difficult on other issues such as the 1926 Sesquicentennial Half Dollar), as can be coins with original surfaces that are not excessively hairlined. Cherrypicking is recommended for any serious collector seeking a representative of this issue, but once an original coin is found, it often is considered to have been one of the more difficult commemoratives for the collector to acquire.