On September 4, 2012, the United States Mint started accepting orders for the America the Beautiful Quarters Three Coin Set featuring the Hawaii Volcanoes National Park Quarter. This represents one of a few new product types which were introduced for the new quarter program featuring a national park or site from each state, territory, and the District of Columbia. 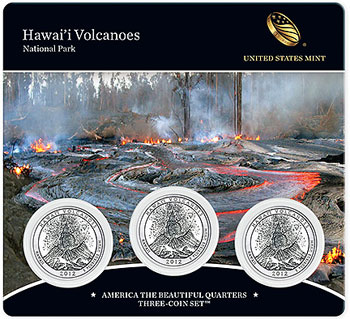 The three coin set includes two uncirculated Hawaii Volcanoes Quarters, one each from the Philadelphia and Denver Mint facilities. Completing the set is one proof quarter from the San Francisco Mint. The three coins are mounted on a durable plastic card which contains a color illustration on the front and a description of the park and site on the back.

The reverse design of the quarter contains a depiction of an eruption on the east rift of Kilauea Volcano. This was designed and sculpted by Charles L. Vickers. The obverse contains the 1932 portrait of George Washington by John Flanagan.