The 2014 Florida United Numismatists Convention held in Orlando, Florida included an auction conducted by Heritage Auctions. While almost every type of United States coinage was offered at the auction there were a number of single coins that led the sale. One of these, no doubt, was the Olsen specimen of the 1913 Liberty Nickel. Graded PF-64 by NGC and considered to be second finest of just five specimens known to have been struck and known to exist, the coin realized a final price of $3,290,000 including buyer’s premium. The coin, which is famous for appearing in a 1973 episode of the series “Hawaii-Five-O” had last sold at public auction in January of 2010, when it realized $3,737,500. 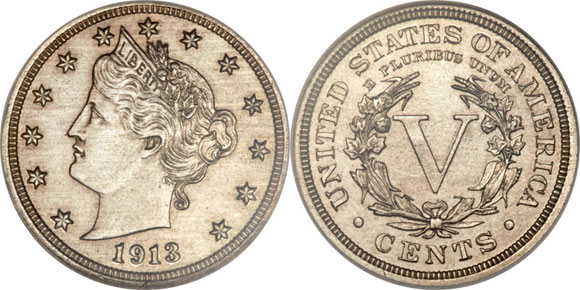 The attentive reader will realize that we have featured a number of articles on the 1913 Liberty Nickel over the years. One of these articles was on the occasion of the sale of the Walton Specimen, sold in April of last year. And even though the sale of the Olsen specimen is the second example available to collectors at public auction within a year, this does not mean that such offerings have traditionally been common. In fact, prior to these two auction sales there had just been a dozen auctions in which a 1913 Liberty Nickel had appeared for sale, the first in 1944 when the coin sold by Heritage this year realized $3,750 when B Max Mehl sold it as part of the Olsen Collection.

The year 1913 was a transitional year in which the largely unpopular Liberty Nickel, which had been in use since 1883, was replaced by the much more visually appealing (in the author’s opinion) Buffalo Nickel. While originally the Mint had planned to produce Liberty Nickels in early 1913 at both the Philadelphia and San Francisco Mints (the latter which had struck its first nickel the year before) this never went through and only Buffalo Nickels were produced in 1913. Yet, there are five 1913 Liberty Nickels known to exist. Their creation is shrouded in mystery, and we will perhaps never know the reasons why they were struck, who struck them, and where they were the first seven years after being struck, as public knowledge of the coins did not come until 1920.

In literature and in the auction catalog of the Heritage sale the facts as we know it (which no doubt have been mingled with fiction to create something which may or may not be true) is well publicized. There are a few things we know for certain: The coins were first publicized in a December 1919 advertisement by Samuel W. Brown, offering to buy any 1913 Liberty Nickel, a coin of which no numismatist at the time had knowledge. Miraculously, the same Brown exhibited five 1913 Liberty Nickels the next year. Brown had been employed at the Philadelphia Mint from 1903 to 1913, and therefore must have been present when the coins had been struck. But if he struck them, or why and how he ended up with them, is unknown and will probably never be discovered. 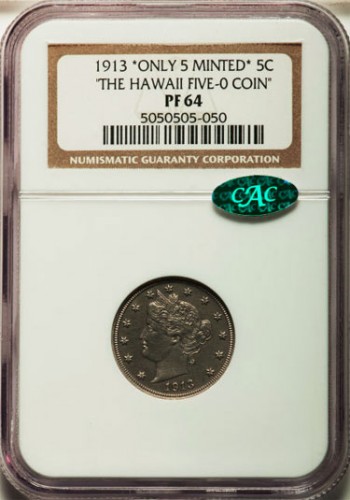 After that the story of the coins is known with more facts and less fiction. The five coins, as a group, passed through the hands of Stephen K. Nagy, Wayte Raymond, Col. Green and Eric Newman. The latter, whose formidable collection is currently being sold, was the last person (and in fact the only person alive today at age 102) to have owned all five 1913 Liberty Nickels at the same time. One of the coins ended up in the Smithsonian Institution; the Eliasberg Collection had the finest known example, graded PF-66 and last sold in 2007. One specimen was deemed lost forever after it’s owner, George Walton, died in a car crash in 1962. The coin disappeared from the numismatic scene until rediscovered in 2003. It was first sold at auction in April of last year. Only one example shows minor signs of circulation, although it’s more likely that this is evidence of mishandling. That piece is in the collection of the American Numismatic Association, leaving just three 1913 Liberty Nickels available in the public market. Both the Eliasberg and Walton specimens are believed to be in strong collector hands at the moment, and presumably off the market for some time to come. That said, it might be quite awhile before we see another offering of a 1913 Liberty Nickel, making the sale of the Olsen Specimen at the FUN auction an auction to remember.