The Official Sales Agency for Collector’s Coins of the Federal Republic of Germany (VfS) will issue (6th February) a new coin which highlights one of the most well-known children’s fairy tale as well as its author. “Hansel & Gretel”, the story of two precocious children – a brother and sister who stumble upon a Gingerbread House owned by a witch who is intent on “eating” them for dinner! The story’s outcome proves that by outwitting one’s opponent one can prevail. 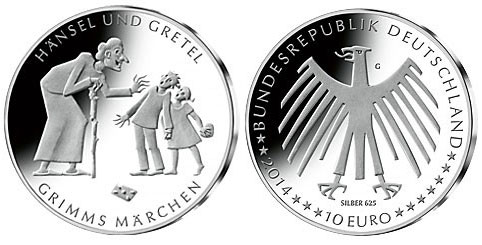 Originally written in 1812 by Brothers Jacob (1785 – 1863) and Wilhelm Grimm (1786 – 1859), the tale also focused on the economic times of the day as the children are brought to the woods where they stumble upon the gingerbread house – by their evil step-mother who convinces their father this is the best measure. She takes this drastic measure as there is famine in the region and she fears that she and her husband will starve – as the children eat too much. In an attempt to return home, the children leave a trail of pebbles and bread crumbs to follow – but the birds have eaten the crumbs! Deep in the woods, the children then stumble upon the Gingerbread House and as both are hungry & tired, they begin to eat pieces of the house before an old woman emerges. With the promise of more food and a cozy bed, the children are lured into the house, unaware that the old woman – a witch – plans to cook the children – and eat them! As the witch prepares to stoke the coals in her oven in preparation to cook her captives – the children push the old witch into the oven and slam the door shut – escaping with their lives and eventually return home to their father whose wife has died.

The collector coin, which is the third year in a six-year series is struck by the State Mint located in Baden, Württemberg and carries a “G” mintmark. The first 10 EURO coin, issued in 2012 included a conjoined portrait of the Brothers Grimm. The second coin featured the tale of Snow White. Designed by artist Marianne Dietz, the obverse depicts the children at the moment they encounter the old woman as she emerges from her gingerbread house. The text “HANSEL UND GRETEL” is placed above the primary design while the remaining text “GRIMMS MARCHEN” is placed just below – both along the rim of the coin. The reverse includes a stylized eagle along with the coin’s denomination of 10 EURO and the mintmark just to the right of the eagle’s head.

Struck in two versions, the proof example is minted in .625 silver and the FDC example is struck in cupro-nickel. The cupro-nickel version is available in commercial banks and post offices for their face value. For more information on this and other coins offered by the VfS, please visit their website at: https://www.deutsche-sammlermuenzen.de/ information is offered only in German – international orders dispatched.