As many viewers know, I buy primarily from Proxibid where numismatic standards mostly are determined by auctioneers rather than by the seller or portal. True, many online auction companies are not only reliable but ultra-trustworthy, and we profile them regularly on my personal site, Proxiblog. Recently, Proxibid has posted a series of badges notifying bidders about the best practices of auction houses.

All that is helpful, but not if you overlook pitfalls. While better bargains can be had on Proxibid than on many portals, including eBay, the risks are far, far steeper if you don’t know how to identify altered, hyped, damaged, self-slabbed coins. This online bidder’s guide can save you hundreds, if not thousands, of dollars.

First off, some basic rules about buying coins in auctions:

Auctioneers are not coin dealers. Typically, they do not know the fine points of numismatics, especially grade and condition. That’s why I decided to share my own buying habits so that you do not make the same online mistakes that I have when I first started bidding online. 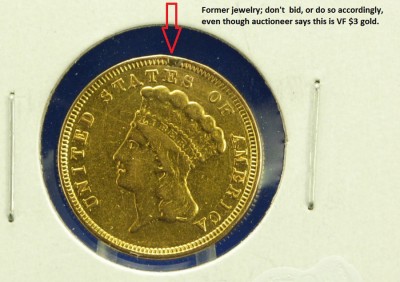 Nothing is quite as disturbing as to buy a coveted gold coin, such as the $3 one depicted in this picture, only to learn that it is damaged from once being made into a jewelry showpiece. Never buy gold if only one side of the coin is depicted. The reverse also may have solder. As for telltale marks, you’ll see evidence at three, six, nine and twelve o’clock on the coin. If the coin was held in place by a bezel, you’ll typically only see a mark at noon, as in this coin. 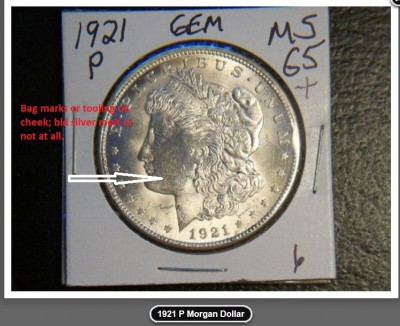 We all know what bag marks look like, and any traces on the primary area of a coin, such as the cheek of Lady Liberty on a Morgan dollar, should alert you to a condition problem. Bag marks that look like pock marks, or tiny holes as if done with a tool, can be a sign or “tooling,” an attempt to make the coin appear in better condition than it really is. Typically you’ll find tooling on inexpensive items, such as 1921 Morgan dollars, as the coin doctor hones his fraudulent skills. 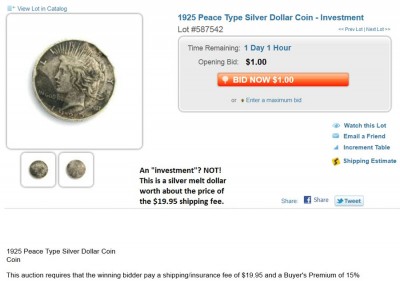 Any auction house that uses the term “investment” is indirectly advising you as a broker rather than as an auctioneer. That should be red-flag enough for you to think twice before bidding. Here’s an example of a common damaged Peace dollar that may have spent time underground being billed as an “investment,” replete with a $19.95 shipping fee, only a few dollars less than the silver melt of this coin. 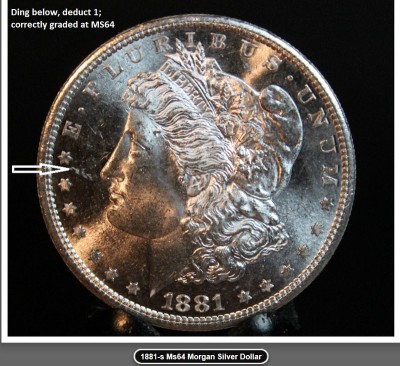 Sometimes the most beautiful coins have a mark in the field, typically caused when an owner drops the coin or scrapes it unintentionally when trying to staple it inside a flip. This coin almost looks gem; but because of a mark at 9 o’clock, you should bid one grade lower at wholesale than the apparent condition of the coin. This coin certainly looks like an MS64; but the mark may bring it down to an MS63. While this is a small consequence on a common coin like an 1881-S Morgan dollar, the same issue on a condition rarity coin can cost you hundreds. 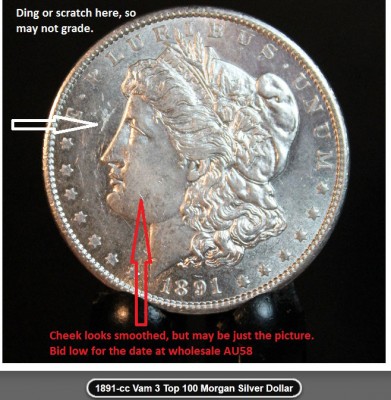 Often a coin will have minor multiple issues as does this 1891-CC dollar. There is a ding or a scratch at 10 o’clock. There are multiple marks in the field. The issue that concerns me most, however, is the change in metal color from the field to the cheek of Lady Liberty. It’s lighter. That usually means someone attempted to smooth damage with a tool. That’s not to say this isn’t a lovely coin. The fields look semi-mirrored, and it is a relatively scarce coin. I wouldn’t send it in for grading by NGC or PCGS, but I would bid at wholesale almost uncirculated … and not worry if someone else wins the lot. 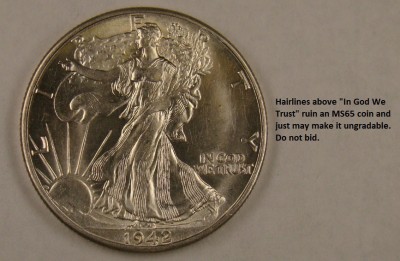 Hairlines often are caused by amateurish attempts at cleaning a coin. Even a soft cloth can cause hairlines if rubbed on the surface of a coin. This otherwise beautiful half dollar has evidence of hairlines in a rubbing motion, essentially rendering it ungradeworthy. You may still like the coin and want to bid at “net grade,” which I would put at almost uncirculated. I just skip these lots because I would rather win an unblemished coin in a future auction than spend money on a damaged one. 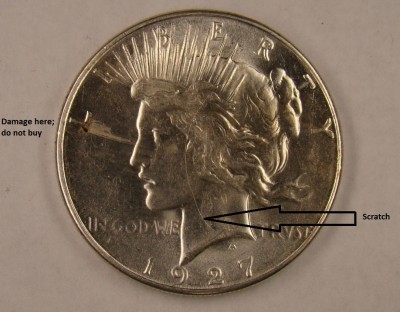 This coin is tempting because it is a relatively scarce Peace dollar. The mark on the “L” of “Liberty” could be a scratch or a stain. I think it is both. Worse, if you removed the stain with a chemical solution, you probably would damage the coin further … and then reveal the scratch underneath. Speaking of scratches, there is one in an arc shape running across Lady Liberty’s face. This was billed as a “gem” MS65 coin worth worth $2000+. I put the value at $45.

Be sure to check back for the next installment. We will cover more problematic coins that you soon will be able to identify on your own.