Editor’s Note: In a three-part series, Coingrader Capsule columnist Michael Bugeja discloses how to buy and bid–or not–in online auctions, which may contain problem coins, hyped lot descriptions and no-return policies, requiring bidders to know the fine points about grading and other numismatic effects that impact condition. In this last post, we look at troublesome coins including altered and counterfeit ones.

As in the previous posts (part I and part II), these coins were offered on the auction portal Proxibid where numismatic standards mostly are determined by auctioneers rather than by the seller or portal. However, those with numismatic knowledge can score high-quality coins on Proxibid; those with little knowledge, can lose big bucks, as some of these pitfall photos below indicate.

Our last coin in the first installment was numbered as #16. We begin with #17 in our consecutively numbered online guide. 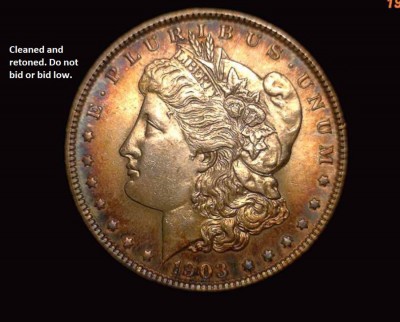 Some cleaned silver coins retone in rainbow colors. But the coin still won’t grade. The colors will be drab with no luster like a 1960s dyed t-shirt. This coin is a perfect example. You still may want the coin. Just bid low and don’t fret if someone else wins it. 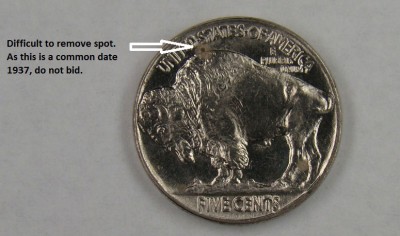 These kinds of spots sometimes caused by a planchet flaw are almost impossible to remove without ruining or altering the coin. Top slabbing companies may not even grade coins with bull’s-eye spots like this, and a few offer spot-removal services. (I’ve tried them with little luck so cannot recommend them. If you have a different experience, please let us know.) Often consignors and sometimes auctioneers will dip a coin to bring out the luster, leave it too long in the solution, stripping off a layer of metal. The net result is a “white” coin with grainy flaws, as in this example. Stay away from these unattractive coins, even when they are a rare 1894-O almost uncirculated, such as this one. There are better examples to be had without the damage. Coins kept too long in flexible flips containing Polyvinyl Chloride (PVC) often contain green patches due to chemical reaction with the plastic. The cleaning product MS70 usually can remove PVC if it isn’t too bad, as in this coin, although the cleaner works better on silver than on copper. At any rate, bid accordingly once again or not at all, if you are not a fan of MS 70 cleaning solution. Just as the name suggests, coins containing cabinet rub might have started out as mint state in a drawer or cabinet but then with repeated opening and closing of the container developed a flatness, or rub. You can still get these coins graded, but they almost always will go almost uncirculated. This coin was graded MS62 by ICG; in a crossover to PCGS, it came back AU58, and for good reason. There was a rub. 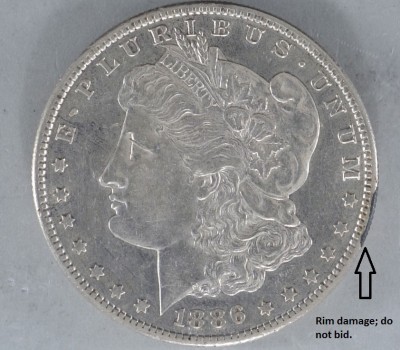 Some otherwise grade-worthy coins have been rejected before because of rim damage. Top-holdering companies just won’t grade these coins no matter now attractive or rare. Better to scan the coin carefully and not bid on ones with rim damage or, once again, to bid accordingly. 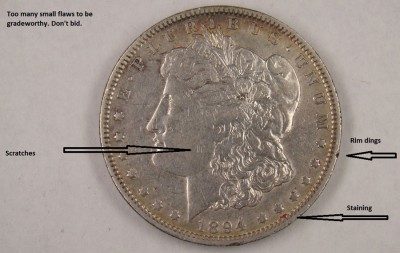 Some coins contain minor flaws. One, or even two, may be tolerable. This one has three flaws. They are all minor, but collectively doom the coin as ungradeworthy. Avoid these. You can find better examples in other auctions. 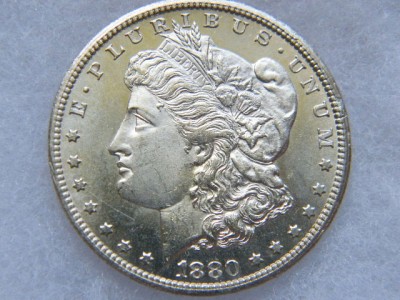 A whizzed or tooled coin will show lighter luster where the smoothing has taken place. This is a damaged and altered coin not worth bidding on. You may still want it, but other less skilled bidders will outbid you for this, believing they are scoring a deal. They got dealt a bad hand. 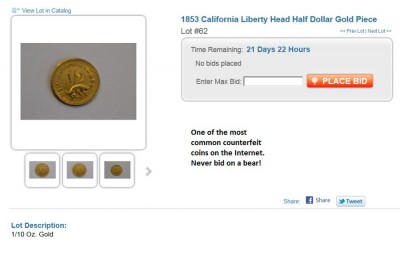 The fake coin you will encounter more often than any other on Proxibid is counterfeit California fractional gold. If it has a bear on the reverse, you can bet it is a brass replica. Check out this article that explains how to tell real from fake California gold. Ask yourself. Why would any coin owner send to a bottom-tier basement slabber? Because the coin has issues. This one has severe environmental damage, as if it spent some time underground. Buying the coin and not the holder (or the flip) is what this online buyer’s guide is all about. This is a perfect example.

We hope you found this online buyer’s guide handy. We tried to cover the most common flaws in coins found on Proxibid. Feel free to add any other kind of flawed coin to the guide in your comments below.