Editor’s Note: In a three-part series, Coingrader Capsule columnist Michael Bugeja discloses how to bid and buy bid–or not–in online auctions, which may contain problem coins, hyped lot descriptions and no-return policies, requiring bidders to know the fine points about grading and other numismatic effects that impact condition. In this second post, we look at subtle issues with coins and/or auctioneers.

As in the first post, these coins were offered on the auction portal Proxibid where numismatic standards mostly are determined by auctioneers rather than by the seller or portal. However, as Proxibid lacks the level of quality control on eBay, for example–a good and bad thing, by the way–this guide will help you in identifying flaws in coins or lot descriptions so you can bid accordingly.

Those with numismatic knowledge can score high-quality coins on Proxibid; those with little knowledge, can lose big bucks, as some of these pitfall photos below indicate.

Our last coin in the first installment was numbered as #7. We begin with #8 in our consecutively numbered online guide. 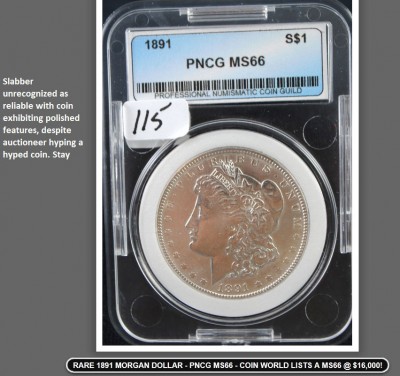 This is the kind of unethical practice you never see on eBay but encounter regularly on Proxibid. It is one thing for an auction house to carry coins in bottom-tier slabs–all of which typically grade problem coins MS66 or MS67–and another thing for the auctioneer to hype the lot as this Proxibid auction house does. Not only does the auctioneer cite Coin World values but the supposed worth of $16,000! This coin looks polished. If so, it is silver melt, about $30. Stay away from the coin … and the auction company! 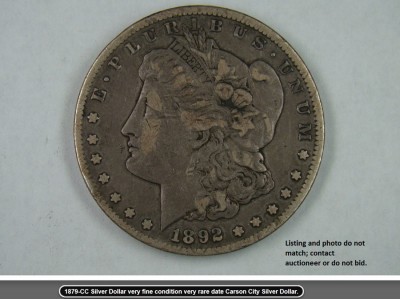 Depicted here is an 1892-CC Morgan listed as an 1879-CC Morgan, an innocent enough mistake that you encounter often on Proxibid, because auctioneers must file hundreds of coins into the computer program, and mistakes are apt to happen. In these cases, do not bid but contact the auctioneer via email and ask that the proper coin be listed with the right description. Most companies will be pleased for the notice. In this case, an 1892-CC and an 1879-CC are worth about the same. Sometimes a rare coin will be depicted with the wrong description for a cheaper coin. If you win the rarer coin, you won’t get it once the auction company catches the mistake, and arguing about it in a resolution attempt will be futile. Be honest with the auctioneer. And then bid once the error is fixed. 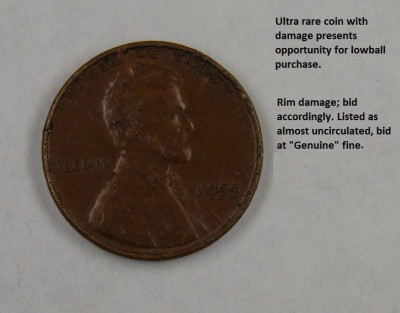 Sometimes, as in this double-die 1955 cent–one of the most coveted coins–it will be easy to spot the damage. This lot was listed as almost uncirculated but has significant rim damage and scrapes and so won’t grade. However, it is still a coin worth close to $1000 retail. Consider making a low-ball bid several hundreds of dollars less than that. You just might win the coin you otherwise couldn’t afford. This type of situation exists in almost every listing of Proxibid coin auctions. You’ll be surprised at what you can come away with on this portal, again unlike eBay, because the latter has multiple-times the audience for any given coin. 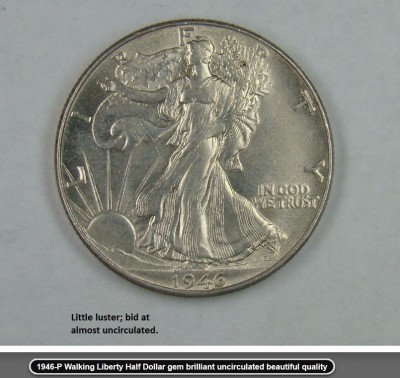 Too often, auctioneers cannot adequately depict luster in digital photographs or lack the numismatic knowledge to know that absence of it in a coin usually means an extra fine or almost uncirculated grade. The half dollar in this coin is depicted as being gem, or MS65, but the lack of luster and smoothed left leg of Lady Liberty indicates an almost uncirculated coin, worth almost $80 less than gem.

12. No Luster but Prooflike? 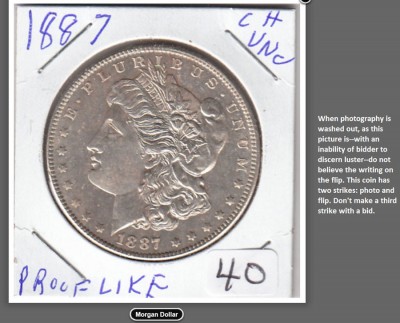 This coin, like the one above, also lacks luster. Except the flip states uncirculated prooflike. We doubt that. A rule of thumb is never to believe the flip. The best way to test an auctioneer’s photos is to compare a modern uncirculated coin with a 19th century silver coin. If the modern coin also appears to have no luster, it is probably the auctioneer’s camera. If there is a significant difference to the sheen, it’s the auctioneer’s description. In both cases, bid accordingly … or not at all. 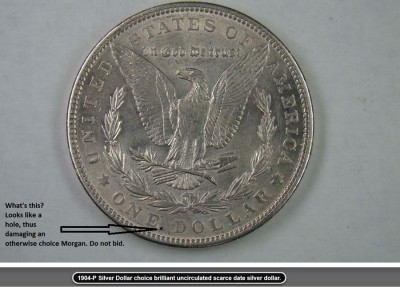 Take your time inspecting each coin. Move your eye in a clockwise motion around and around the coin, beginning with the rim and working your way inward. In this case, a rare 1904 Morgan in MS63-64 state–worth about $250–was flawless, except for a pinhole after the word “One” on the bottom of the reverse. This is a damaged coin, so do not bid; or if you want it to fill a slot in your album, then bid accordingly. 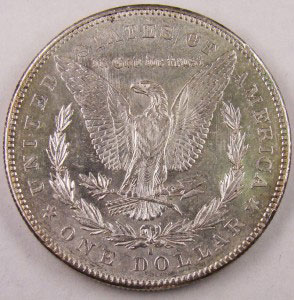 Slide marks may lower a coin’s condition by a point or two. These are hairline-like marks but uniform and straight at noon or 3 o’clock caused by sliding a coin in and out of a Dansco or similar album. Once again, bid accordingly; if a coin looks MS65, bid MS64; MS64, bid MS63, and so on. 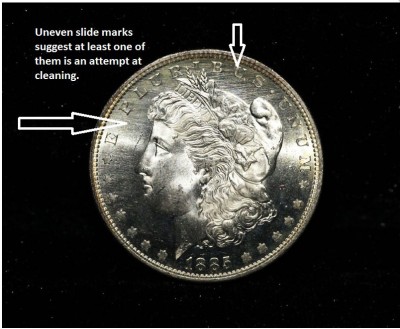 Occasionally an auctioneer will get a prime coin, such as this one, that has been cleaned with a rough cloth, causing hairlines, but done in such a way as to resemble slide marks. Often the auctioneer cannot tell the difference. Hairline cleaning marks will not be uniform. Nor will they occur at noon or 3 o’clock. 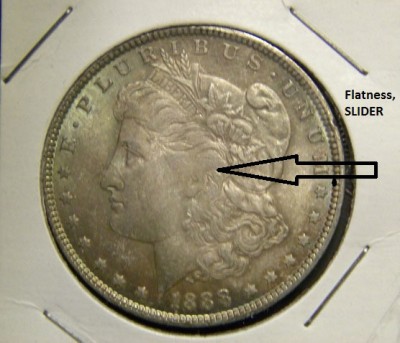 Sliders are coins that are billed as uncirculated but are really just almost uncirculated coins. You will have to have a rudimentary knowledge of grading to tell sliders from mint state coins as each denomination or series contains different characteristics. The best place to find slider evidence of wear is on the hair of Lady Liberty above the ear of a Morgan Dollar. As in this example, you’ll see that it is worn and smooth.

Check back next week for the last installment of our online coin buyer’s guide. We’ll end with coins that have been altered and/or misrepresented in lot descriptions.