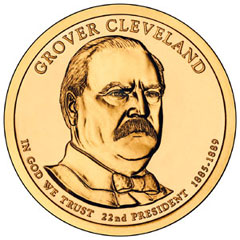 The United States Mint has started accepting orders for circulating quality Grover Cleveland Presidential Dollars. Since these coins are not being released for general circulation, the only way to obtain them is through the Mint’s numismatic product offerings.

In late 2011, the Treasury Department announced their decision to suspend production of Presidential Dollars for circulation as a cost savings measure. Only a limited number of coins for each design would continue to be produced in order to fulfill demand from coin collectors. In April, the US Mint began sales of the Chester Arthur Dollars and orders from collectors quickly surpassed the Mint’s expectations and preliminary production levels.

The Grover Cleveland Presidential Dollar honors the 22nd President of the United States. His portrait appears on the obverse of the coin with a rendition of the Statue of Liberty on the reverse of the coin. Both the obverse and reverse were designed and sculpted by Don Everhart. This coin represents Cleveland’s first term as President from 1885 to 1889. A separate coin will be released for his second term as President from 1893 to 1897. This second coin is mandated by the Presidential $1 Coin Act since he served in nonconsecutive terms.

There are no product limits or household ordering limits in place. All orders are subject to a shipping and handling fee of $4.95, with an extra $7.95 charge for each 500-coin box. Orders may be placed at http://catalog.usmint.gov/

The remaining 2012 Presidential Dollars are expected to be available from the US Mint in bags, boxes, and rolls on August 16, 2012 (Benjamin Harrison) and November 15, 2012 (Grover Cleveland second term).