The United States Mint has started accepting orders for the latest release of the American Presidency $1 Coin Cover series featuring Grover Cleveland. This is the first of two covers that will be released to mark his two non-consecutive terms as President. 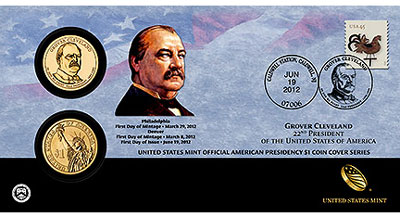 The 2012 Grover Cleveland (First Term) Presidential Dollar Coin Cover includes two coins from the first day of production at the Philadelphia and Denver Mint facilities. These dates were March 29, 2012 at Philadelphia and March 8, 2012 at Denver. The coins are mounted on a display card and placed within an envelope illustrated with a portrait of the President.

The envelope contains a 45-cent Weather Vane postage stamp, which is post marked June 19, 2012, Cladwell, NJ. This marks the first day that the coin covers were issued by the US Mint.

Pricing is set at $19.95 per cover with an overall production limit of 22,000 covers. To place orders, please visit http://catalog.usmint.gov.