The Royal Canadian Mint has launched two new coins featuring one of Canada’s most emblematic representations of wildlife: the grizzly bear.

A sub-species of the North American brown bear, the grizzly, or Ursus arctos horribilis, is the second largest land carnivore in North America. Once found in much of western North America and the Great Plains, human settlement from the East gradually eliminated the bears from much of this range. Today, only about 1,000 grizzlies remain in the continental U.S.; in Canada, however, they are much more prolific, especially in the western provinces of British Columbia, Alberta, Northwest Territories, and Yukon, where the grizzly population is in excess of 25,000. 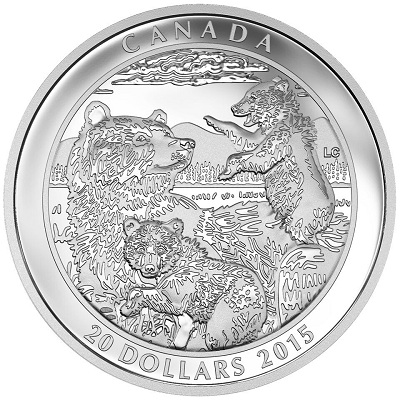 Their ferocious reputation is thought by some to be undeserving, as grizzly bears are by nature omnivores that forage mostly on plants, fruits, berries, grasses, and forbs. If grizzly bears are on the hunt, their prey can include fish or rodents like ground squirrels, carrion, and hoofed animals, such as moose, elk, caribou, and deer. They can be dangerous to humans, particularly if surprised or if humans come between a mother and her cubs; for the most part, though, they seem to prefer to keep their distance. 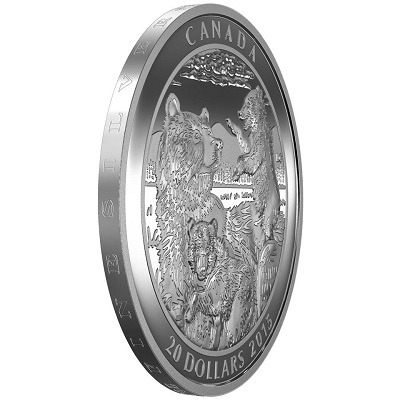 Despite its large size, the grizzly bear has been known to run at speeds of 55 kilometres, or near 30 miles per hour. It has a well developed sense of smell and hearing that compensates for its poor eyesight.

Contrary to popular belief, the grizzly bear is not a true hibernator like its cousins the brown bear or polar bear. In the winter its body temperature may drop a few degrees and its respiration may slow slightly, but it can remain active all winter due to its adaptation to a diet with year-long availability. After the mating season, which normally occurs in June, cubs are born in January after a gestation period of approximately seven months, with the bear’s fetal development taking place mainly in the last two months of pregnancy. 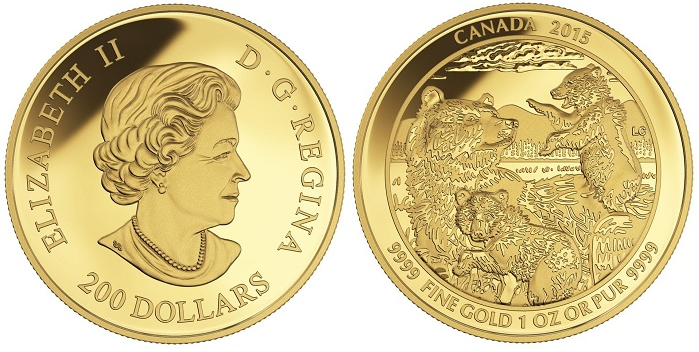 The coins, one gold and one silver, are designed by artist Lauren Crawshaw and share the same design. The reverse features a portrait of the remarkable bond that exists within a family of grizzly bears, which are all rendered in stunning dimensional detail. In this ground-level view of the family, the mother is depicted lying in the grass flatlands at the foot of the mountains of western Canada, which rise up softly in the background beneath the clouds in the sky. Her expression is filled with maternal love and devotion to her brood; one cub stands on its mother’s hip in a playful and expressive stance, vocalizing and excitedly moving its forepaws as though communicating a story to its captivated audience. A quieter sibling lies close to the mother, draping itself over the female’s forepaw; this cub’s head is turned towards the viewer, as though peering out of the coin’s image field with an innocent yet hesitant expression, perhaps signifying that humans pose the greatest threat to the grizzly bear’s existence.

The obverse includes the effigy of HM Queen Elizabeth II as designed by artist Susanna Blunt, which is used on all circulation and most commemorative Canadian coinage since 2003.

The silver edition includes Edge Lettering with impeccable precision, indicating the coin’s metal weight. The silver coins are available as a four-coin set that includes The Catch, Togetherness, the Clan, and the last coin in the series, The Battle, expected to be issued at the end of the year. The gold and silver coins are also sold separately.

For more information on this and other coins on offer by the Royal Canadian Mint, please visit their Web site. Information is offered in both English and French, with international orders dispatched where applicable.