Located on the North American plate but politically more associated with Europe, Greenland is an almost mythical country few of us will ever visit but many will fly over. Located between the Canadian coast and Europe, Greenland is associated with ice, cold, and a rough natural environment found nowhere else in the world. The country is also home to a population of approximately 57,000 people, mostly located in small towns scattered along its coast.

The first non-indigenous people to arrive in Greenland were the Norse, who settled the country for about 500 years starting in the late 10th century. They eventually abandoned their settlements in the late 15th century, most likely as a result of climate change that made agriculture virtually impossible.

Following the unification of Denmark and Norway, old claims concerning land in Greenland were revisited, and in the 18th century Denmark slowly started colonizing the area, which became a Danish colony in 1814. Under the name “General Trade Company,” small settlements were erected that focused on whaling and trading with the native population. These continued for a few hundred years, and Denmark continued to exercise its claim on Greenland even after Norway and Denmark split in 1904. Then, four decades later during World War II, Greenland gained importance for the United States thanks to its strategic location and proximity to occupied Europe. This continued into the Cold War, when Greenland controlled parts of the route from Soviet seaports in the arctic to the Atlantic Ocean. American military installations had first been established in the early 1940s and would remain strategically important for many decades.

Over time Greenlanders gained more independence, especially after 1979, when “home rule” was granted to the country. This means that Greenlanders are able to decide most local matters and enact legislation, though the country still remains part of Denmark. More recently, increased autonomy has been granted by Denmark following the Greenlandic vote for the “self-government act” in 2008. Eventually the only matters that will still be controlled by Denmark will be defense and foreign policy.

While the currency of Greenland has long been the Danish krone (DKK), there have been a number of local issues that are of interest to collectors. While most of these have low mintages (not surprising considering the small population), some of the subsets are still very affordable, making the coins of Greenland an interesting series to collect. The earliest issues are tokens produced for various mining companies located throughout the then-Danish colony. These mostly-19th century tokens are all rare and were used by employees of these companies, most of which were engaged in the mining of cryolite. Found mostly on the western coast of Greenland, cryolite was traditionally used in the production of aluminum. Its supply in Greenland was depleted in the early 1980s and synthetic alternatives are now used. 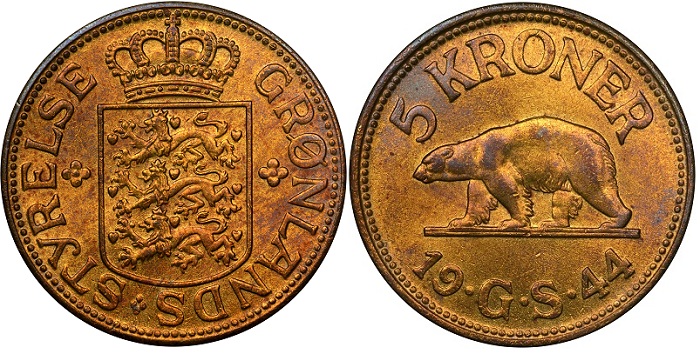 While these early mining tokens are of much historical interest to students of Greenland and mining history, they are mostly out of reach for the average collector. Survival estimates for most issues range from a couple to a few dozen, while some denominations are unconfirmed altogether.

There are, however, a few issues that can be found more easily. These were all struck in the 20th century and had much larger mintages than before. The first are the 1911-dated token issues from Greenland Mining Ltd, based in Josva (Innatsiaq). Struck in Germany, the tokens were produced for a company that mined copper in southwest Greenland. Nickel-plated zinc tokens were struck in denominations of 10, 25, and 100 ore. Five thousand were struck of each denomination and were used briefly until 1914, when the company ceased to operate. The obverse featured the date, while the reverse had two crossed hammers placed over the denomination. Enough have survived of these tokens to see offerings quite regularly on online auction websites, although some searching needs to be done to find examples that are not oxidized, as is common with zinc coins of the period.

Another token issue was dated 1922. The series included 10-ore, 50-ore, 2-kroner, and two varieties of 10-kroner coins and were struck for the Ivigtut Cryolite Mining & Trading Co. Earlier token issues had also been struck for this company, but this so-called 4th series is the most easily collected. The 10-ore is the most common, with 10,018 pieces struck in copper-nickel. The 2-kroner had the same mintage but is somewhat more difficult to find. Only 4,018 of the 50-ore pieces were produced. The 10-kroner was struck in copper-nickel (mintage 10,706, struck in 1926) as well as aluminum-bronze (mintage 7,018, presumably struck in 1922), but the latter was quickly withdrawn from circulation as it was the same size as the Danish 2-kroner. The latter issue is the only truly difficult coin in this series, which features a seated polar bear on the obverse and the denomination on the reverse.

The last token issue to be discussed is a very plain series struck in 1913 (although dated 1910), with two final issues produced in 1932, the last token coinage produced for a company in Greenland. Struck for the Thule-Kap York trading station located in northwestern Greenland, the coins feature the aforementioned name “Thule/Kap York” on the obverse and the denomination (a plain numeral) along with the date the station was established (1910). A central hole is found on the majority of coins. Struck in Germany as well, all are easily found, even in Uncirculated condition, despite relatively low mintages of 5,000 coins each for the 5- and 25-ore, and 2,000 for the 100- and 500-ore pieces dated 1910. More difficult are the 1932 issues of 5 Kroner and 10 Kroner, which both had mintages of just 500 coins produced in Denmark.

As a Danish colony, one single series of coins were struck exclusively for circulation in Greenland. Produced at the Danish Mint in Copenhagen, denominations initially included a copper-nickel 25-ore, an aluminum-bronze 50-ore, and a krone struck in the same metal. All denominations featured the same basic design, with the Greenland coat of arms on the obverse and a walking polar bear on the reverse. Mintages were high for a country with such a low population, ranging from approximately 195,000 for the 50-ore piece to 310,000 for the 25-ore.

In 1940-41, after years in circulation, a total of 50,000 25-ore pieces were brought over to New York, where a central hole was punched in the coins, apparently to avoid confusing them with the 1-krone coins. The coins sent to New York were circulated and high-grade examples with the hole are rare. The other denominations are easily found in all grades including Gem Uncirculated.

A few years later, in 1944, the Philadelphia Mint struck one final issue, a brass 5-kroner piece, whose value was equivalent to the American Dollar, and was mostly used by U.S. personnel stationed in Greenland. The coin features the same basic design with the coat of arms and polar bear. The total mintage of this final issue struck for the colony was 100,000 pieces, and despite high catalog values this is also a coin that is found relatively easily in all grades up to Uncirculated.

In 1957, four years after Greenland became a county within Denmark, a krone was struck in aluminum-bronze. Featuring the crowned arms of both Greenland and Denmark on the obverse and the denomination within a wreath on the reverse, this coin had a mintage of 100,209 coins. Subsequent issues with the same design but struck in copper-nickel were produced in 1960 (mintage 108,500) and 1964 (mintage 110,000). These were the final coins specifically struck for Greenland and all three dates are easily found in all grades, including Gem Uncirculated.

Recently, private companies have produced fantasy coinage in the name of Greenland that are often marketed as “patterns” and found for sale on Internet auction websites such as eBay. Not officially sanctioned by either the Greenland or Denmark governments, these should be qualified as medals. While having interesting designs directly related to Greenland, they are not legal tender, and it is up to the collector to discern whether or not to include such pieces in a Greenland collection.

The coins struck for the colony in the 1920s and 1940s are very collectable, and a set can be put together with some searching for a reasonable amount. The 1957 to 1964 issues can be added for completion and make the collection historically interesting. With the American background of Greenland, these coins have a direct relation to the United States and are an interesting addition to a collection of U.S. coins. Advanced collectors might wish to include the various token issues, or perhaps just one piece from each of the individual companies. For having such a small number of pages devoted to Greenland in the Krause book, the possibilities are almost endless.