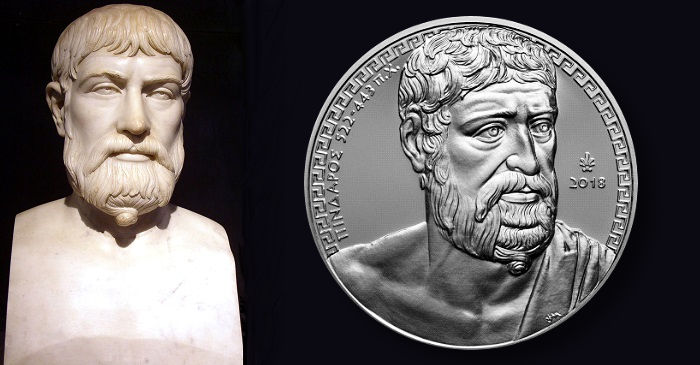 The Bank of Greece has announced (20th June) new silver Proof coins which pay tribute to one of ancient Greece’s most eloquent and celebrated poets who utilised a style of lyric verses which survives to this day. Pindar of Thebes (522-443 B.C.) was born in Boeotia, a region in Central Greece, into an aristocratic family and was educated in neighbouring Athens, but as an adult, he lived much of his life in Thebes. Almost all his early poems have been lost, but his reputation was probably established by his later hymns in honour of the gods. He developed into the greatest lyric poet of ancient Greece, respected throughout the Greek world. Of his 17 volumes, comprising almost every genre of choral lyric, only four have survived complete, however, they lack his musical settings. The extant poems, probably representing his masterpieces, are odes commissioned to celebrate triumphs in various Hellenic athletic games. Proud and religious in tone, they are noted for their complexity, rich metaphors, and intensely emotive language and it is this work from the ancient Greek lyric poet that was best preserved.

Although he composed various genres of choral poetry (dithyrambs, hymns, and laments), of which only fragments remain, he is best known for his epinikia (victory odes) that he wrote on commission in honour of winners at Panhellenic games. His four books of victory odes (the Olympian, Pythian, Isthmian, and Nemean Odes) have survived complete. His patrons included important figures of his time (Hieron of Syracuse, Theron of Akragas, and Diagoras of Rhodes). Pindar would typically praise the victor’s birthplace and its local heroes and deities, his family, and personal virtues. According to Pindar, victory came as the combined result of innate virtue, training, and the favour of the gods. Pindar has been admired since antiquity for his sublime and grandiloquent style, his bold use of language, and the seriousness he attached to his own art.

The style of the Pindaric ode is today defined as a poem with set meter and rhyme, just like all other odes, and is further defined by three triads, namely the strophe and the antistrophe being of the same stanza form, and an epode as the final, which is different. This form of ode is named after the writer Pindar and this genre of poetry survives to this day.

The silver Proof-quality coins are produced by the Hellenic State Mint at their facilities in Athens on behalf of the Bank of Greece and are designed by engraver and artist George Stamatopolous. The obverse depicts a very detailed portrait of Pindar which is collectively inspired by several busts of the poet believed to have been sculpted during his lifetime. The primary design is partially surrounded by a traditional Greek-key design and the text ΠΙΝΔΑΡΟΣ, 522 – 443 π.χ. (Pindar 522 – 443 B.C.), the year of issue, and the Hellenic mintmark are placed just to the right of the portrait.

The reverse design includes fragments of discovered tablets of the works of Pindar which are surrounded by a Greek-key border. The value of 10 EYPΩ (EURO) is placed beside and to the right of the primary design and the text ΕΛΛΗΝΙΚΉ ΔΗΜΟΚΡΑΤΊΑ (Hellenic Republic) encircles the national crest, which is seen below the denomination.

The Proof quality silver coins will officially be released on the 11th July. Each coin is encapsulated and presented in a custom case and is accompanied by a numbered certificate of authenticity. Interested collectors can inquire about purchases by visiting the dedicated website of the Bank of Greece.