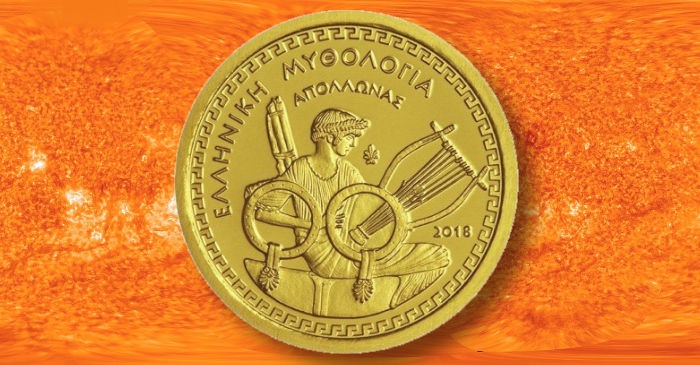 The Bank of Greece has announced that they will issue, on the 19th September, their latest gold collector coin which is part of their series entitled “Greek Mythology,” the theme and design of which will highlight the Olympian gods. The new coin features the god Apollo, the son of Zeus and Leto, and twin brother of Artemis. Apollo is known in mythology as the god of light, music, and the arts, as well as of prophecy, healing, measure, and harmony. He was born on the island of Delos, at the centre of the Cyclades, where the Delia festivals were held in his honour. After slaying the serpent Python, he founded the famous oracle at Delphi, where the Pythian Games were celebrated. Other important sanctuaries of Apollo existed in Amyclae (near Sparta), Bassae in Arcadia (Temple of Apollo Epikourios), and Didyma (Asia Minor). Apollo was traditionally portrayed as a beardless, idealistic youth, holding a lyre and sometimes a bow. Although he was not without his dark side, being also the god of plague and a punisher of hubris. Some of his other epithets were Phoebus, Loxias (in reference to his ambiguous oracles), and Musagetes (leader of the Muses).

The gold Proof-quality coins are produced by the Hellenic State Mint at their facilities in Athens, on behalf of the Bank of Greece, and are designed by M. Antonatou. The obverse of the coin includes a classic and familiar stylised depiction of the young god seated and holding a lyre, with a quiver of arrows on his back. Apollo is shown also wearing a laurel wreath on his head, symbolic of his royal status as the son of Zeus. The text ΕΛΛΗΝΙΚΗ ΜΥΘΟΛΟΓΙΑ and ΑΠΟΛΛΩΝΑΣ are placed above the primary design and are arranged in two lines. The mintmark of the Greek State Mint is placed just to the right of the face of Apollo, with the year of issue seen just below the lyre.

The reverse includes a sun representation as a central motif and in the middle of this depiction is the Greek crest with the text ΕΛΛΗΝΙΚΉ ΔΗΜΟΚΡΑΤΊΑ (Hellenic Republic) encircling the crest. The denomination of 100 EYPΩ is placed below the sun design. Both designs on the obverse and reverse are framed with a traditional Greek key border.

The Proof quality gold coins will officially be released on the 19th September. Each coin is encapsulated and presented in a custom case, accompanied by a numbered certificate of authenticity. Interested collectors can inquire about purchases by visiting the dedicated website of the Bank of Greece.